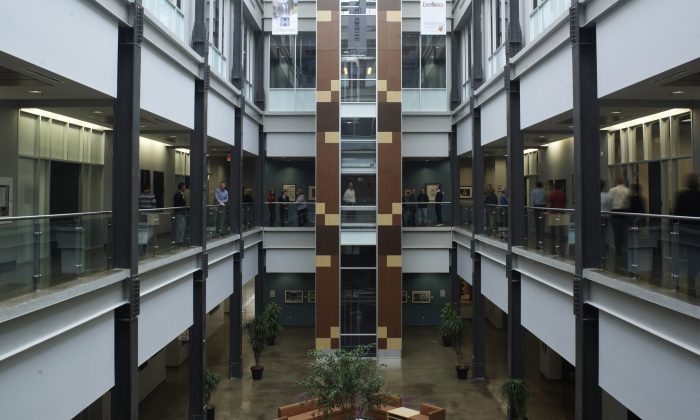 The view from the inside of McMaster Innovation Park's business incubation centre. (investinhamilton.ca)
Canada

Despite what you’ve heard about U.S. Steel, Hamilton is one of Ontario’s fastest-growing economies. The Conference Board of Canada forecasts a 2.3 percent GDP growth in Hamilton in 2014, and predicts similar growth to continue in subsequent years.

Hamilton’s ability to attract business can be traced in part to the city’s aggressive economic development department, which sets out streamlining processes at city hall and markets Hamilton internationally.

The availability of good, affordable real estate was what attracted the American Loyalists who populated Hamilton in the 18th century in the first place. The same is true for the many businesses currently relocating to Hamilton, as well as young families that are fleeing Toronto-area housing prices.

The city’s dramatic downtown facelift is well underway, and includes a complete restoration of the fantastic International style city hall that opened in 1960, a reworking of many downtown historical buildings, as well as the notable addition of many modern commercial and residential buildings.

Cranes are in the air, and right now there are 14 new buildings completed or near completion in Hamilton’s downtown, with nine new projects recently announced.

The largest residential project involves the renovation of the Royal Connaught, a 13-storey Edwardian style hotel completed in 1916 that will be restored on the outside and completely modernized on the inside. The project involves five phases including new buildings on the property. The project will produce some 700 condo units in the heart of downtown Hamilton.

Residential projects like these support the growth in industrial and office space in Hamilton. The industrial vacancy rate is around 2 percent, according to Norm Schleehahn, the City of Hamilton’s business development manager, citing 2012-2013 findings by Colliers International.

Office vacancy rates in Hamilton are hovering around 12 percent, yet office and retail space in the downtown core are certainly affordable when compared to Toronto’s pricing.

This resurgence in building is no doubt the result of an impressive number of financial incentive programs focused on improving building stock in targeted districts around Hamilton.

For builders, low-interest and interest-free loans along with a complete reduction of development charges for eligible projects have made development very attractive.

There are also additional funds and supports available for the development of brownfield sites over and above provincial incentives, and grants available for LEED (Leadership in Energy and Environmental Design) certification.

One of Hamilton’s finest assets is its abundance of historical Victorian homes and century-old storefronts. Substantial grants and interest-free loans are available for restoration of these heritage buildings.

Low-interest loans to improve office space support building owners and tenants. Setting up shop in Hamilton has become increasingly appealing for small and medium-sized businesses as a result, especially those focused on technological innovation.

This is in keeping with Hamilton’s history. Alexander Graham Bell’s family home was just outside Hamilton, and it was there that he first demonstrated telephone technology.

Today, Hamilton’s inventors are most likely associated with McMaster University in some way, if not as staff or students, then connected with their tech startup incubator.

McMaster University is known for scientific and medical research. It is considered the premier health research university in Canada, as well as being in the top five for engineering, computing, and technology.

The state-of-the-art McMaster Health Campus is currently under construction across the street from Hamilton City Hall. The building will be used as a family practice teaching hospital, and will also be home to the City of Hamilton’s pubic health services, to allow for collaboration between organizations.

The 4,000 McMaster students and 450 employees using the facility expect to handle 54,000 patient visits a year.

McMaster has recently completed three buildings in the McMaster Innovation Park, built on a brownfield site near the downtown core. The park’s sparkling new facilities hold 430,000 sq. ft. of office and research space in three buildings.

Focused on technological innovation, the current jewel in the crown is the McMaster Automotive Research Centre (MARC), an 88,000 sq. ft. building that includes a 70,000 sq. ft. teaching lab focused on green automotive technologies.

If the McMaster Innovation Park is completed according to current plans, the entire area will include 1.7 million sq. ft. of mixed-use space, right in the middle of downtown Hamilton.

Hamilton is located one hour from Buffalo, NY, and about 45 minutes from Toronto, and is easily accessible by highway, railway, ship or air.

The city has built upon its accessibility by developing a number of business parks located near transportation arteries. The Red Hill Business Park, for example, is next to Hamilton’s new expressway that ties Highway 403 and the Queen Elizabeth Way (QEW) together for quick access to both.

Red Hill was chosen by Maple Leaf Foods as the location for a new meat processing plant set to open in 2014 that will employ 670 people, this on the heels of the 2012 opening of a $100 million Canada Bread bakery facility.

The Port of Hamilton is Canada’s largest Great Lakes port and a destination for both North American and international cargo. The port directly connects to the CN and CP railway networks and is next to the QEW. Canada’s steel products as well as booming agribusiness keep the port increasingly busy, and expansion of its facilities is in the works.