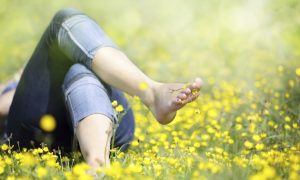 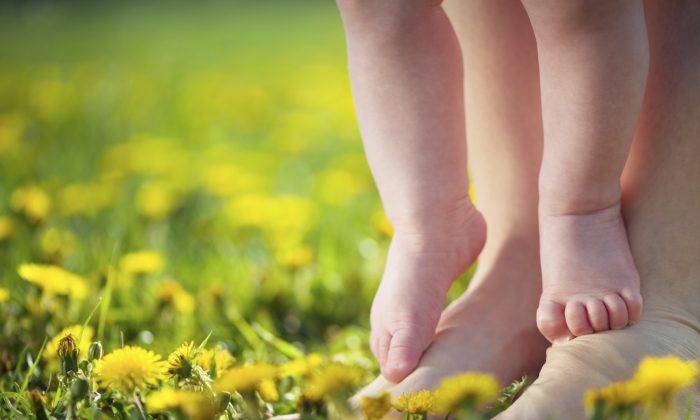 Tips to Benefit From Grounding Indoors and Out

The interchangeable terms “earthing” and “grounding” refer to the act of walking barefoot on the earth, which allows for the transfer of free electrons from the earth into your body, through the soles of your feet.

These free electrons are among the most potent antioxidants known, and the effects of grounding have been shown to promote health in a number of ways.

For starters, walking barefoot can help ameliorate the constant assault of electromagnetic fields and other types of radiation from cell phones, computers, and Wi-Fi—an important benefit for those whose lives are bustling with electronics.

It also cuts inflammation, which thrives when your blood is thick and you have a lot of free radical stress and positive charges in your body. Grounding effectively alleviates inflammation because it thins your blood and infuses you with negatively charged ions.

Grounding Is a Key Mechanism by Which Your Body Maintains Health

A more recent theory that has yet to be proven but appears very sound is that grounding may facilitate the formation of structured water in your body, which is very important for optimal cell function.

I previously interviewed Dr. Gerald Pollock on the topic of structured or “living” (negatively charged) water. His groundbreaking research has revolutionized the way we view water—especially water as it exists within your cells.

Water is in every cell in your body, and this water is highly ordered (structured) and charged. If you don’t have properly structured water in your cells, it can impact the functioning of the much larger protein molecules (and others) that interface with the cell.

The water inside the cell also interfaces with water outside the cell, which has the opposite charge, creating a battery effect. Your body’s ability to generate electricity is actually a key part of your achieving health.

Electrical charges delivered from cell to cell allows for nearly instantaneous communication within your body, and the messages conducted via these electrical signals are responsible for controlling the rhythm of your heartbeat, the movement of blood around your body, and much more. In fact, most of your biological processes are electrical.

The water in your cells achieves its ordered structure from energy obtained from the environment, typically in the form of electromagnetic radiation, including sunlight and infrared heat. But grounding may also play an important role.

Just as water increases in structure when a negative charge is introduced by an electrode, the negatively charged electrons you receive when grounded help increase the structure of the water in your cells.

By restructuring the water in your cells, you promote more efficient tissue healing. So in essence, when you ground, you are charging every single cell in your body with energy your body can use for self-healing.

After discussing the structured water issue with Dr. Pollock, Dr. Stephen Sinatra, a prominent cardiologist and author of the book, Earthing: The Most Important Health Discovery Ever?, said he’s considering revising his theory on how grounding actually works to promote health.

You can listen to my previous interview with Dr. Sinatra below, in which he reviews a number of known functions and benefits of grounding.

Grounding Indoors and Out

Not all surfaces allow you to ground. Effective outdoor grounding surfaces include sand, grass, bare soil, and unpainted/unsealed concrete and brick. You can also remain grounded even if you’re not barefoot by wearing leather-soled footwear when you walk across these surfaces. The effect is not as pronounced as barefoot but it’s still present.

Staying grounded in a modern dwelling is another matter. It’s pretty challenging to ground by going barefoot inside your home, as many common flooring materials are poor conductors. This includes wood and insulating materials, vinyl, carpet, sealed tiles, and marble if it’s chemically treated and placed on top of sealed concrete.

I personally have virtually stopped sitting in my home and have a stand up desk where I spend many of my waking hours. I don’t wear shoes and put a grounding pad on top of a foam pad that helps cushion my weight. I also sleep on a grounding sheet and walk about two hours most days on the beach while I read so am grounding for most of the day.

How Your Elevation Impacts Grounding

There’s also the issue of elevation. When you are grounded (i.e., in contact with the Earth) it’s impossible for your body to carry a charge, which is good. The more distance there is between you and the Earth, the greater charge your body carries. In fact, this has been precisely calculated.

For every meter you are above the ground, 300 volts of charge will build up in your body. So if you are in a second story bedroom, your charge would be 1,000 volts, on average, and this increased charge may increase your risk of health problems. For example, one 2009 study found a 40 percent increase in stroke risk among people living in multistory homes.

To take advantage of grounding indoors, your best bet is to use a grounding pad to sleep or sit on. These work well provided you have a grounded electrical outlet, and can be particularly beneficial if you live in a high-rise building. A grounded outlet is generally identifiable by the fact it’s a 3-prong outlet with a ground port (bottom outlet). Most modern homes built after 1970 will have a grounded electrical system. When using an earthing mat, make sure your bare skin is in contact with it.

There should not be a layer of clothing between you and the mat. Other ways to ground indoors include touching the faucet with one hand while shaving or brushing your teeth with the other. And when flying—which can cause you to become severely ungrounded—taking off your shoes and placing your feet (bare or with socks) on the steel struts of the chair in front of you will help you stay grounded.

While exercising barefoot outdoors is an ideal way to ground, you can also take advantage of the benefits of grounding when exercising indoors. Recent research shows that doing yoga indoors on a grounded yoga mat helps reduce blood viscosity and exercise-induced inflammation—the same effects you’d expect from walking barefoot outdoors. To test their theory, the researchers asked subjects to perform one hour of yoga exercises designed to initiate minor inflammation using a grounded yoga mat.

As noted in the study:

How Grounding Benefits Your Blood

The way grounding affects your blood is a major part of why it’s so beneficial. Assaults like a high-sugar diet, smoking, electromagnetic forces, emotional stress, anxiety, high cholesterol, and high uric acid tend to make your blood thicker and slow-moving (hypercoagulable), which increases your risk of having a blood clot or stroke. Hypercoagulable blood is the essence of inflammation, because when your blood does not flow well, oxygen can’t get to your tissues.

Grounding helps thin your blood (making it less viscous) by improving its zeta potential, which means it improves the energy between your red blood cells. Zeta potential is the electrical potential of both solids and liquids, also referred to as electrokinetic potential. Your red blood cells repel each other and function at the speed of light, traveling through your body at an astounding 186,000 miles per second.

When you ground to the earth, your zeta potential rises, which means your red blood cells now have more charge on their surface, which forces them apart from each other. This action causes your blood to thin and flow easier. It also causes your blood pressure to drop.

Grounding has been shown to increase zeta potential by an average of 280 percent—a discovery that can have a profound impact on cardiovascular disease. Virtually every aspect of cardiovascular disease has been correlated with elevated blood viscosity. Other diseases that can benefit from the increased zeta potential include stroke, Alzheimer’s, cancer, and virtually any other illness that requires good oxygenation to tissues in order to heal or be prevented.

When walking barefoot outdoors, research has demonstrated it takes about 80 minutes for the free electrons from the earth to reach your blood stream and transform your blood. Bear in mind that since grounding’s effect on blood thinning is so profound, you need to work with your health care provider if you’re taking blood thinners, to make sure you don’t overdose on the medication.

Grounding Is a Foundational Aspect for Optimal Health

Free radical stress from toxic exposures associated with modern life continually depletes your body of electrons. This is one of the primary reasons why you need to eat an antioxidant-rich diet, as antioxidants donate electrons back into your body, thereby helping to help ward off free radical damage to your tissues. However, you don’t have to swallow them all. You can also get these electrons by going barefoot outside.

Grounding also helps calm your sympathetic nervous system, which supports your heart rate variability. This in turn plays an important role in balancing your autonomic nervous system. Pain relief, improved sleep, and a generally enhanced sense of well-being are but a few of the health benefits reported by people who try grounding.

According to Clint Ober, who is a leading expert in this field, a lack of grounding may actually be an underlying factor of most chronic disease—a phenomenon Ober calls “electron deficiency syndrome.” The premise is simple. If you are deficient in electrons, your body is unable to effectively combat inflammation.

I firmly believe grounding is one of the key mechanisms by which your body maintains equilibrium and health. The human body evolved in constant contact with the Earth, and your body needs this continuous interchange of energy in order to function properly.

When you stand barefoot on bare earth or sand, for example, electrons from the Earth flow into your body, giving you a virtual “transfusion” of healing power. This occurs until you equalize with the Earth, so you never have to worry about getting too much. The process simply stops when your charge (your voltage) returns to zero. It’s as safe and natural as it gets. For a visual demonstration of the powerful biological effects of grounding, see this previous article. It features an experiment conducted by Gary Schwartz, PhD, at the University of Arizona, using sunflowers.