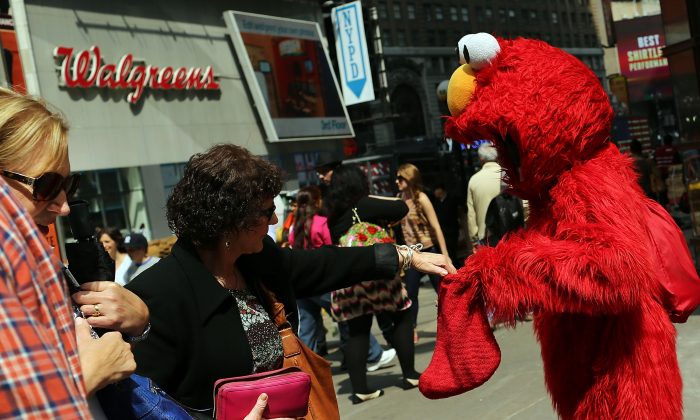 A tip is given to a man dressed as the Elmo children's television character after he posed for photos in Times Square, New York City, April 10, 2013. (Spencer Platt/Getty Images)
New York

The Spidermen, Supermen, Mickey Mouses, and other costumed characters who flood Times Square every day may soon have to get a license.

A proposed bill by New York City Council Member Andy King would ensure that each character can be easily identified. Tim Tompkins, the president of Times Square Alliance, called on the city to regulate the costumed characters in June.

“My bill is intended to protect tourists who come to our city, the everyday New Yorkers and children who become overwhelmed and frightened when four to five costume characters approach them to make a dollar,” King said.

In June, Moussa Rabaoui, 22, of Queens, dressed as a Spider Man, was arrested and charged for forcible touching on Times Square. Rebaoui is only the latest in a string of arrests of costumed characters on Times Square.