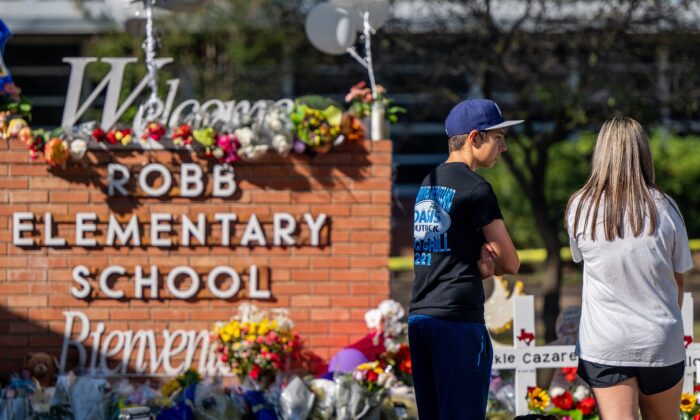 Young adults stand looking at a memorial at Robb Elementary School following a mass shooting in Uvalde, Texas, on May 26, 2022. (Brandon Bell/Getty Images)
Crime and Incidents

Timeline of Texas School Shooting: What We Know so Far

A mass shooting at Robb Elementary School in Uvalde, Texas, resulted in the deaths of 19 children and two teachers on May 24. At least 17 others, including children, sustained non-life-threatening injuries.

The massacre is the country’s second-deadliest K-12 school shooting on record, following the 2012 shooting at Sandy Hook Elementary in Newtown, Connecticut.

Authorities identified Salvador Ramos, 18, as the shooter responsible for the attack. He was shot and killed about 90 minutes after he arrived at the school around 11:30 a.m. that day.

Reportedly a high school dropout, Ramos did not have any criminal or mental health history known to authorities. His motive remains unknown as authorities continue to investigate the events of the deadly shooting.

At a press conference on May 26 at Robb Elementary, an official from the Texas Department of Public Safety (DPS), South Texas regional director Victor Escalon, said that Ramos appeared to have walked unobstructed into a school building before the attack, in contrast with previous reports that he had been confronted by a school security officer outside the school.

Below is an approximate timeline of what is known so far, including details about the events surrounding the massacre and conflicting reports.

Ramos turned 18 on May 16 and purchased two semi-automatic rifles separately, on May 17 and May 20, the Bureau of Alcohol, Tobacco, Firearms and Explosives (ATF) confirmed on May 25 in a briefing to Texas state senators, reported KHOU. ATF authorities said he also bought 375 rounds of 5.56 ammunition on May 18.

Day of the Attack

On May 24, earlier in the day, students and their parents had been at Robb Elementary for an honor roll ceremony.

Ramos posted on Facebook three times in the 30 minutes before reaching Robb Elementary school, Texas Gov. Greg Abbott told a press conference on May 25. The first Facebook post indicated that he would shoot his grandmother. The second post said that he had shot his grandmother, and the third said that he would shoot an elementary school, without specifying which. The third post was published within 15 minutes before Ramos arrived at the school, Abbott said.

“It actually on a message … to somebody else that he had had conversation with,” Texas DPS Director Steven McCraw said Friday.

Ramos, who had moved in with his grandmother in March, shot her in the face and left her in critical condition before leaving the residence and traveling about 2.29 miles to Robb Elementary, McCraw said on May 25.

The grandmother, 66, ran across the street to a neighbor to get help after she was shot. She also reported Ramos to the police department, he added. She was medevaced to a San Antonio hospital, McCraw said.

Ramos, traveling in his grandmother’s pickup truck, crashed into a ditch near the school, according to law enforcement. He emerged from the passenger’s side of the truck and was carrying what witnesses say was a long gun and a bag that authorities later determined contained the ammunition.

Ramos shot at two witnesses outside a funeral home across the street before he continued toward the school. He then climbed a fence into a parking lot and fired shots at the school “multiple times,” Escalon said.

The two witnesses ran away uninjured.

The Texas DPS around this time received calls from local law enforcement that Ramos was making entry into the school, Texas DPS spokesman Lt. Chris Olivarez told CBS News on May 25.

The suspect reaches the school parking lot and begins shooting at the school, McCraw said during a briefing on May 27.

The school resource officer—initially said to have confronted the suspect, then reported not to be on campus—actually confronted a person, but it was a teacher, not the suspect, according to McCraw. The officer drove right by the suspect.

The 18-year-old shooter entered the west side of Robb Elementary school, McCraw said.

The door had been propped open by a teacher.

The suspect begins shooting into a room, either room 111 or room 112.

He soon enters adjoining classrooms, gunning down teachers and children.

Over 100 rounds were fired in total.

Three police officers enter the same door Ramos used, followed by another team of police officers and a sheriff’s deputy. The first officers received wounds from bullets grazing them.

None of the officers try breaking down the door to get into the classroom.

Other officers entered the building, Escalon said. Some evacuated people who were inside.

As many as 19 officers were in the hallway at one time.

“There was plenty of officers to do whatever needed to be done with one exception: the incident commander inside believed they needed more equipment and more officers to do a tactical breach at that point,” McCraw said Friday. The commander “believed that, in fact, it was a barricaded subject that we had time there was no kids at risk,” he said.

While hearing the gunfire, teachers in other classrooms began “breaking windows trying to evacuate children to prevent any further loss of life,” Olivarez told CBS News.

The call lasted one minute, 23 seconds.

She called back, telling of multiple dead people.

Another caller called 911 from the room. Three shots could be heard through the phone.

Officers breach the classroom door and kill the suspect.

The 21 victims who perished in the attack were later all found in the same classroom. All of them were identified by May 26.

The gun used by Ramos in the shooting was a Daniel Defense DDM4 V7 rifle, the ATF confirmed on May 25, reported KHOU. On May 24, after the shooting, The Daily Dot obtained a receipt of the purchase. Daniel Defense, a gun manufacturer based in Georgia that sells guns online, appears to ship weapons to registered dealers which then complete the purchase, the outlet noted.

The other rifle, a Smith & Wesson M&P 15, was found on the ground after the shooting, outside the pickup truck, state and federal law enforcement officials said, reported NBC News.

Escalon was asked by reporters on May 26 about why officers were unable to stop Ramos sooner, and what officers were doing between 11:44 and 12:45. He responded that he had “taken all those questions into consideration” and hoped to provide updates later.

McCraw told reporters at a news conference on May 27 that it was the “wrong decision” to not engage Ramos sooner.

He said that “the on-scene commander at the time believed that it had transitioned from an active shooter to a barricaded subject.”

He also revealed that Ramos entered the school through a door that was propped open by a teacher just minutes before.