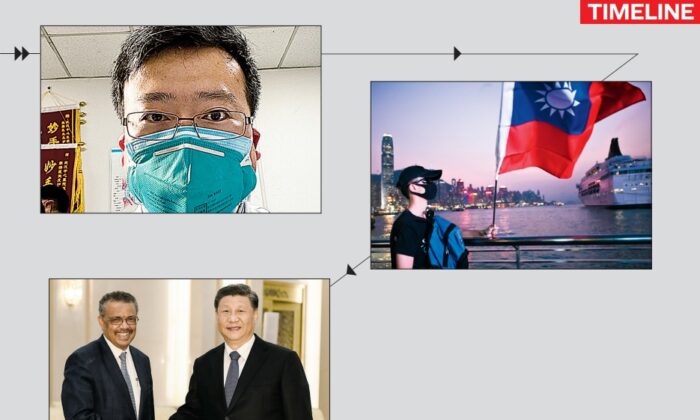 When Health Minister Patty Hajdu was asked by a reporter during a press conference if the number of COVID-19 cases and deaths coming out of China can be trusted, she replied that Ottawa has no reason to believe China’s numbers are falsified.

The question was raised on April 2 in light of a Bloomberg report saying U.S. intelligence officials have advised the White House that Beijing covered up the extent of the CCP virus outbreak in China.

Hajdu said that Ottawa relies on the World Health Organization (WHO) for coordinating the collection of data from other countries. When the reporter asked whether WHO’s numbers can be trusted if China’s can’t, Hajdu accused the reporter of fuelling conspiracy theories.

Hajdu’s response comes at a time when an increasing number of news reports show  that the Chinese regime hasn’t been forthright about the outbreak, costing the world precious time in combating the spread of the virus early on, and commentaries criticizing WHO for its praise of Beijing and repeating positions favourable to the regime.

British media recently reported that Prime Minister Boris Johnson has been advised by scientists that the number of cases of infection may have been downplayed by a factor of 15 to 40 times.

And U.S. Secretary of State Mike Pompeo has said that Beijing wasted “valuable days at the front end” of the outbreak, noting that a similar situation could unfold again “if we don’t get to the bottom of this.”

The timeline below chronicles the early stages of the CCP virus outbreak in China and the regime’s coverup, and contrasts some of the measures taken by Taiwan and Canada.

Despite being next door to China and having a notably higher population density than Canada, Taiwan has had significantly fewer cases compared to Canada.

The actions Taiwan took to control the spread of the virus include stopping all travel from China in the early days of the outbreak, enforcing a mandatory two-week quarantine for all those who recently entered Taiwan, and using big-data analysis to track potential carriers of the virus. Authorities also banned the export of face masks and took early action to ensure a steady supply of personal protective equipment.

Asked why Canada wasn’t imposing restrictions on travel from China, Ottawa cited advice from Canadian health officials and WHO.

Canada’s Chief Public Health Officer Dr. Theresa Tam, who has served as an adviser for WHO, also cited the organization’s advice as justification for not imposing travel restrictions on China, saying: “Having measures that very negatively affect a certain country that’s trying very hard to do its best can impede whether this country in the future will ever share anything transparently with others. China posted the virus genome very quickly. What are they getting out of it? I think the idea is to support China.”

In the early days of the outbreak, WHO advised against imposing travel restrictions on China, with Director-General Tedros Adhanom Ghebreyesus expressing “respect and gratitude to China for what it’s doing,” and saying WHO “opposes any restrictions for travel and trade or other measures against China.”

Wu Se-chih, adjunct assistant professor at the Taipei College of Maritime Technology, told The Epoch Times that WHO “has been taking China’s side” and that this has had dangerous consequences.

“The reality is that the pandemic has become serious all over the world,” Wu said.

Bowen Xiao, Eva Fu, Cathy He, and Omid Ghoreishi contributed to this report.