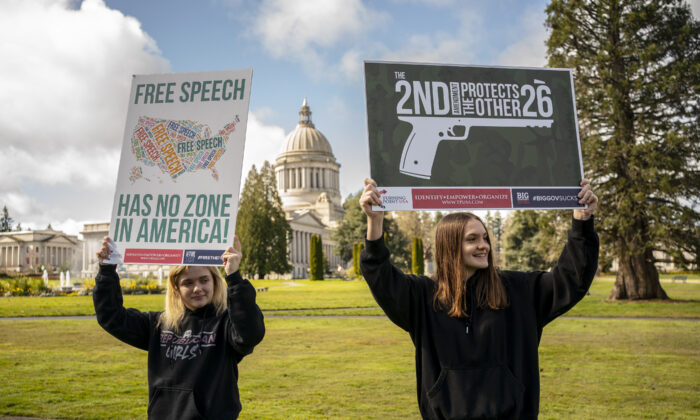 Time to Stand Up for the Second Amendment More Than Ever

“Rahm Emanuel, call your office. You said it—‘Never let a serious crisis go to waste!’ And we got one, baby—two white supremacists shooting up the joint in Atlanta and Boulder. The president’s into it already. Bye-bye assault weapons and those thousand round mags Hollywood lefties love to show off in their movies. We might even get ‘im to ban cap guns by executive order. … What? He wasn’t a white supremacist? His name was Al-what? … Like Al Ky-Duh? … They wiped his page off Facebook? … Why’d they do that? … Zuck must’ve had a good reason. Anyway, what about the guy in Atlanta? He was offing Asian girls in a massage parlor. What’s more white supremacist than that? … Yeah, yeah, Harvard and Yale. They’re the real ani-Asian racists but … Sex addict? … Sex addict! … Andrew Cuomo didn’t kill anybody … or did he?”

You get the idea.

That might be the beginning of a stand-up act bya conservative comic, a tryout anyway, in a provincial city, but these are the days we are living in—more insane by the minute.

It is, however, the very moment we must stand up for the Second Amendment more than ever.

Liberals (oh, how I despise that misuse of the English language) and progressives (ditto) tend to think of it as an outdated 18th Century idea mainly of value to hunters, gun collectors and firing range enthusiasts that is now risking everyone’s lives and allowing criminals free rein. (The latter is what they do, but we won’t get into that.)

Since I don’t hunt and don’t get to the range as much as I’d like, a deeper rationale is considerably more significant to me—the Framers’ desire for private citizens, free individuals, to be able to protect themselves from oppressive government power, whether that be monarchical or, in modern times, communist, fascist, oligarchic or even from the hands of those who think they are “good,” what I call “moral narcissists.”

Liberals pooh-pooh this idea, of course. The state is great thing to them—it’s “progressive”—especially when it’s on their side.

But when I hear all this talk, as we’re hearing now, of executive orders to outlaw or even take away guns for the good of the public, I am reminded of what happened in Germany in 1938, when members of the Nazi Party were allowed to have weapons but Jews were prevented from keeping them.

Some say that prefigured the Holocaust only a few years off (others debate this—don’t they always?) But it’s hard to say why disarming people wouldn’t make it easier to load them in railroad cars.

But closer to home, I’ve always wondered why Chicago, with some of the most stringent gun laws in the country, almost always has the most gun violence. Their homicide rate skyrocketed in 2020 with 769 deaths. (I could give reasons, like the decline of the family, but I will let that pass for now.)

Similarly, Paris, with even more stringent gun laws, has had yet more calamitous attacks, including on the offices of the newspaper Charlie Hebdo and the 2015 Bataclan Theater massacre when 130 people were killed and and a staggering 416 more injured.

Of course, those were jihadists. That never happens in the United States…. Oh, wait.

Well, it never happens if you hide when it does as quickly as possible. And, of course, it depends on what your definition of a jihadist is. But if you, as in the case of Boulder mass murderer Ahmad Al-Issa, quickly insist this is entirely a mental health issue, I have a question to ask.

Do you think ISIS is entirely sane when they behead innocent people, put their severed heads on sticks and parade them on television? I hope that’s not sane, because otherwise I don’t know what the definition is.

Meanwhile, if you want a grim laugh, in the dark comedy sense, check out the exchange of accusatory and then backtracking liberal/progressive tweets ZeroHedge found on Twitter about the Boulder event. As ZH’s Tyler Durden dryly notes of the horrendous shooting spree, “expect this not to be classified as terrorism, and the motive to remain unclear for some time.”

At the same time, careerist politicians like our vice president will continue to claim the Atlanta killings were racist acts when everyone personally involved so far insists Robert Long was motivated by shame for his sexual addiction.

By calling this racism is Ms. Harris looking to gin up the Asian American vote, a significant amount of which was lost to Trump the last go-round?.… How could you say such a thing, Simon?

Because that’s what they do. Political pro Dick Morris said much the same on Greg Kelly’s Newsmax show last night.

What we must do is remain staunch in our defense of the Second Amendment. Years ago I will admit I waffled occasionally, giving them this and that in the hopes it would mollify. No more. Every time the Bidens of the world come out to exploit tragedies like these, I get stronger in my defense of the Second. Now I’m like an ox. I might even turn into a gun nut.

What we should do to minimize these tragedies is examine the causes and try to intervene before these people can act.

This is not easy for a variety of reasons, but plenty of clues hide in plain sight, the most obvious place being social media, even when, actually especially when, pages are taken down by the likes of Mark Zuckerberg for reasons that are unclear but suspicious.

Mr. Zuckerberg, or whoever might be instructing him in this regard, doesn’t believe the public has a right to know what the perpetrator of acts like this said and thought. We, the great unwashed, must be shielded from information we could’ve looked at with impunity the day before, had we known about it.