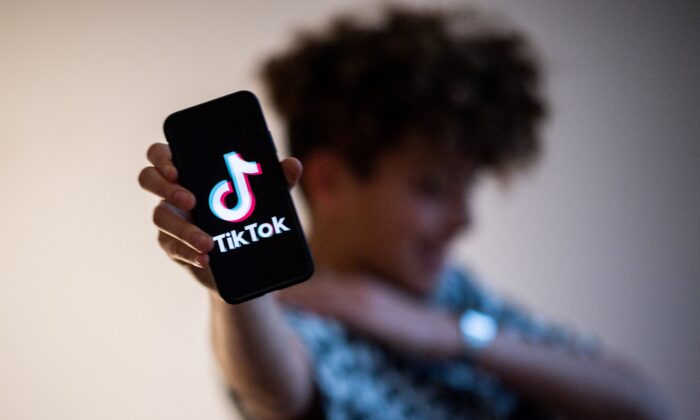 A teenager presents a smartphone with the logo of the Chinese social network TikTok on Jan. 21, 2021. (Loic Venance/AFP via Getty Images)
Thinking About China

ByteDance employees in China have repeatedly accessed the private information of tens of millions of American TikTok users, according to a recent report from BuzzFeed News. The people behind the app can’t be trusted. Moreover, the app itself is dangerous. Like an illicit, highly addictive opiate, TikTok ruins lives.

When you hear the word “addiction,” what images spring to mind? An alcoholic stretched out on the pavement, surrounded by empty bottles? A drug addict, homeless and hopelessly lost? How about a person scrolling mindlessly on social media, wasting hours, weeks, months, and even years of their life away?

Excessive social media use is comparable to drug addiction. Of course, not all drugs are created equally. Some are more potent than others. The same goes for social media platforms. Of all the platforms out there, TikTok appears to be the absolute worst.

The American people are hurting. Drug addiction is at an all-time high, with about 33 million citizens being affected by substance abuse. Drug abuse alters the brain; it hijacks the central nervous system, manipulating our thoughts, actions, behaviors, and emotions.

More specifically, drugs directly affect the brain’s “reward” circuit. After repeated exposure to certain substances, the brain starts to adjust to the surges of dopamine. In short, heavier doses are required to get the same high. Once a person heads down this perilous path, turning back is difficult.

Social media works similarly to alcohol and harder drugs, such as heroin and cocaine. Apps such as Snapchat, Instagram, Facebook, and Twitter are problematic. But TikTok, an app created by ByteDance, a company with close ties to the Chinese Communist Party (CCP), is even worse. In fact, the platform has been labeled the “most addictive” social media site, with young people spending an average of 12 hours and 12 minutes on the app each week. That’s more than two full days each month, 24 days per year.

Between 2019 and 2021, TikTok more than doubled its worldwide user base (to 655.9 million from 291.4 million). By 2025, it’s expected to have at least 1 billion users. At least 80 million Americans use TikTok; that’s almost a quarter of the population. A total of 57 percent of TikTok users are female, most of whom are teens. Social media use hurts girls more than boys, according to a study. Again, not all platforms inflict the same amount of harm. If Facebook is social media’s answer to weed, then TikTok is crack cocaine.

TikTok has been referred to as digital crack cocaine—and for a good reason. It’s addictive, dangerously addictive. In fact, the app is so problematic that scientists recently coined the term “TikTok addiction.” Users don’t just use TikTok: They become dependent on it. Dependency is the foundation of every addiction. Users, initially in control, lose themselves to the substance. In many ways, the users become the used, with the drug dictating their every move, thought, and action.

Recently, a team of researchers, led by Troy Smith, a scientist at the University of Trinidad and Tobago, analyzed data from hundreds of college students. They then measured the six components of addiction: salience, mood modification, tolerance, withdrawal, conflict, and relapse. The researchers found that the worst affected TikTok users scored higher on measures of loneliness.

In an interview with PsyPost, Smith said, “The risk of overuse and possible problematic use exists and is associated with addiction-like behaviors that can potentially negatively impact the daily lives of sufferers.”

In 2020, TikTok became the world’s most downloaded app. Since then, representatives from Paracelsus Recovery, a mental health and addiction clinic in London, told the BBC that they’ve seen an “explosion” of young clients exhibiting telltale signs of TikTok dependency. Over the past 12 months, referrals for TikTok addiction have increased “fivefold.”

The founder of the clinic, Jan Gerber, believes TikTok should be compared to hard drugs.

“It has a very similar impact on the brain’s biochemistry to hard drugs,” Gerber said. “TikTok has a severe impact on individual happiness, everyday life, and productivity.”

Besides stealing your private data, the app also steals your happiness.

Of course, the thievery, one assumes, is by design. Launched in 2016 by ByteDance, a tech giant based in Beijing, TikTok is actually banned in China. Instead, Chinese users can access Douyin, the original, watered-down version of TikTok.

In China, children are allowed no more than 40 minutes per day on the app; overnight use is strictly forbidden. So even if a child logs on for 40 minutes daily, that works out at less than five hours per week. Compare that number with the 12 hours and 12 minutes of average use in the United States. Unlike the content that appears on Douyin, which is mild in nature, the content on TikTok is, for lack of a better word, controversial, with users actively encouraged to hold their breath until they pass out, expose themselves in a sexual manner, and drive in a reckless manner.

TikTok is dangerous—it’s addictive. And like all dangerous drugs, it ruins lives. Why, one wonders, is this app still allowed to operate in the United States?