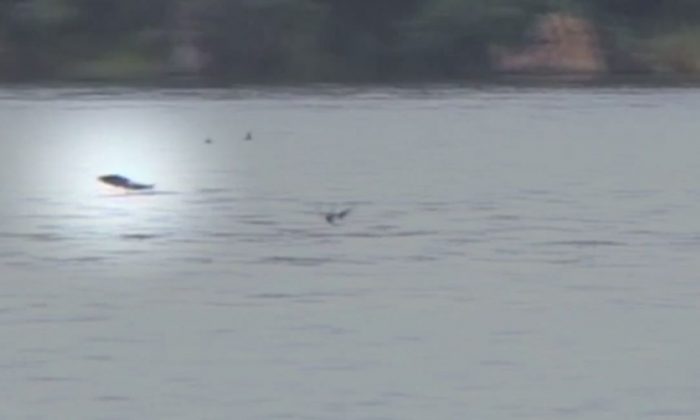 A screenshot of Nature.com's YouTube video shows a fish, highlighted on the left, catching a bird in flight.
Africa

Tigerfish Catches Bird in Mid-Flight in Video: Watch it Here

A tigerfish catches a bird in a new video, captured in Africa.

It’s the first confirmed record of a freshwater fish preying on birds in flight, reported the Unit for Environmental Sciences and Management at North-West University in Potchefstroom, South Africa.

They published their research in the Journal of Fish Biology.

“The whole action of jumping and catching the swallow in flight happens so incredibly quickly that after we first saw it, it took all of us a while to really fully comprehend what we had just seen,” says Nico Smit, director of the unit, told Nature.

Smit said that the team wasn’t convinced of anecdotal reports that date back since at least the 1940s.

They set out to study the migration and habitat of the tigerfish in the Mapungubwe National Park, near the border with Botswana and Zimbabwe.

They didn’t expect to find the fish leaping out of the water and capturing a bird.

However, they saw as many as 20 fish catching barn swallows–every day they were there.

The behavior has not been officially documented until now because the study of freshwater fish in Africa limited, Smit said.

“We hope that our findings will really focus the attention on the importance of basic freshwater research, and specifically fish behaviour,” he said.