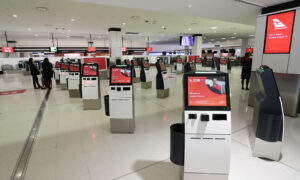 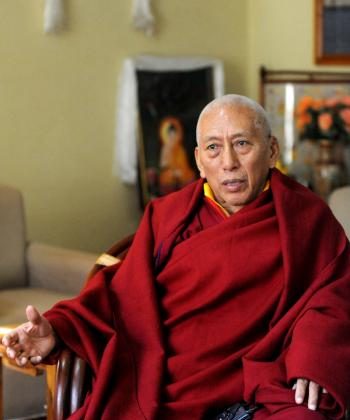 PRAGMATIST: Current Tibetan prime minister Samdhong Rinpoche speaks during an interview in Dharamshala on March 17. Rinpoche accepted the Dalai Lama's resignation and says the Dalai Lama is preparing Tibetans to face a future without him at the helm, but the parliament-in-exile has asked the Dalai Lama to reconsider his retirement. (Raveendran/AFP/Getty Images)
World

By Nicholas Zifcak
Print
Across the globe, a scattered Tibetan diaspora voted to elect a new prime minister-in-exile, or “Kalon Tripa,” on Sunday. The vote comes just 10 days after the Dalai Lama announced his retirement from all political duties.

While not unexpected, the announcement was a blow to many, especially the parliament-in-exile that passed a resolution last Friday asking their leader to reconsider. The Dalai Lama rejected the request insisting on transferring political authority while he is still healthy.

“I take pride and freedom to voluntarily relinquish the political power wielded by the institution of the Dalai Lama,” said the 75-year old Tibetan leader to a gathering of thousands of Tibetans at the main Tibetan Temple in Dharamsala, reports Tibetan news agency Phayul.com.

The Dalai Lama’s retirement makes the election “all the more important for the Kalon Tripa to be someone who can take the role of the of the Dalai Lama. Not exactly take the role, but do everything the Dalai Lama used to do for the Tibetan people,” said Dolma Yangzom. Yangzom now lives in New York but previously worked at the Central Tibet Administration (CTA), the formal name for the government-in-exile in Dharamsala, India.

The Dalai Lama has been preparing the Tibetan people and the government-in-exile for democratic self-rule since the 1960s.

In fact, he was already working to reform Tibet’s feudal government before the Chinese invaded in 1949. After fleeing Tibet in 1959, the Dalai Lama established the CTA at a hill station at the base of the Himalayas in Dharamsala.

In addition to working for the cause of a Tibet ruled by Tibetans, the CTA looks after Tibetans outside of Tibet and works to preserve their cultural heritage. It also helps refugees escaping Tibet to start their new lives. These are the core responsibilities facing the new Kalon Tripa.

As head of the government, the Kalon Tripa appoints seven Cabinet members to oversee the departments of Religion and Culture, Home, Finance, Education, Security, Information and International Relations, and Health. CTA also has a Parliament of 43 members and a Supreme Justice Commission that protects rule of law.

Out of 6 million ethnic Tibetans, 150,000 live in exile. Of those, two-thirds live in India. There are sizable populations in Nepal and Bhutan, and the rest live mostly in Europe and the United States.

Tibetans see the government-in-exile as the continuation of the government that ruled Tibet until the Chinese regime invaded, and as such, those living in Tibet also recognize this body as their legitimate government.

The government looks after 21 agricultural settlements, and four carpet-weaving cooperatives in India, as well as 20 Tibetan settlements in Nepal and Bhutan. It also supervises 30,000 Tibetan monks and nuns at 223 monasteries in India, Nepal, and Bhutan. In cooperation with the government of India, the CTA’s Department of Education oversees 77 Tibetan schools in the region, educating 28,000 students.

The new Kalon Tripa is the second to be directly elected by the Tibetan people. The last one was elected twice, in 2001 and 2006. Prior to that, the office holder was appointed by the Dalai Lama.

Three candidates made it through last October’s primary elections to stand for top office. Two of the three live in the United States, and one in Europe.

The front-runner is the youngest candidate, Lobsang Sangay, a Fulbright scholar and senior fellow at Harvard Law School. He has extensively researched the history of Tibetan democracy and worked with the government-in-exile.

Tenzin Namgyal Tethong, a distinguished fellow at the Tibetan Studies Initiative, Stanford University, has worked for the CTA in several positions including as the head of the departments of Finance, Home, and Information & International Relations.

Tashi Wangdi, formerly at the Office of Tibet, in Brussels has worked for the CTA since 1966 holding various high offices including Kalon.

Although this is not the first election, Yangzom says Tibetans are more engaged this time, campaigning and voicing opinions.

"People are getting really involved in the Kalon Tripa election, which is so historic. It has never been like this before throughout the Tibetan history. … They are like, ‘We want this and we don't want this.’ And they are campaigning for persons like they do in other governments. We have never done that before in our life, so that is really interesting," said Yangzom.

Tibetans older than 18 who are registered with the government-in-exile are eligible to vote in the elections. The North American Regional Election Committee of the CTA set up 34 polling centers in the United States and Canada. The election committee will announce election results in Dharamsala on April 27.