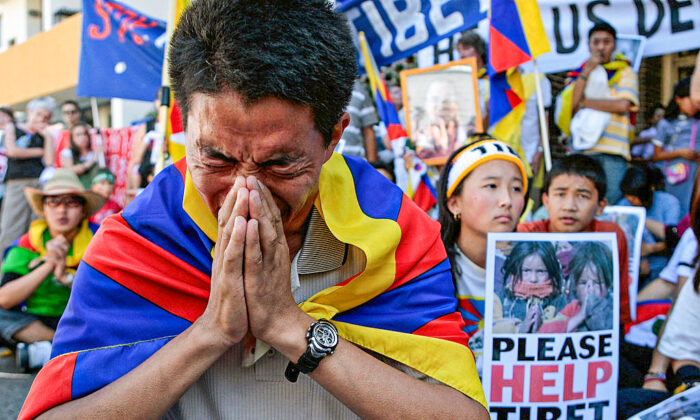 Pro-Tibetan demonstrators pray for human rights in Tibet during a protest outside the Chinese consulate in Sydney, Australia, on March 18, 2008. (Anoek De Groot/AFP via Getty Images)
Thinking About China

On Sept. 30, 2021, the Central Tibetan Administration (CTA), the government-in-exile of Tibet, released a document entitled “Tibet: 70 Years of Occupation and Oppression.” This document details Tibet’s fascinating but sad story from ancient times to today, but concentrates on the Chinese Communist Party’s (CCP) occupation and brutal oppression.

The People’s Liberation Army of China invaded Tibet from 1949 to 1951, even though it was an independent state and exhibited all the elements of statehood. It had a territory, a population, and a government.

A glance at the history of Tibet reveals that historically, it was never a part of China. Of course, during its history, Tibetan rulers developed close relationships with successive Chinese (and other Asian) rulers.

But, unfortunately, the CCP has misinterpreted these relationships as “laying a solid foundation for the ultimate founding of a unified nation.”

This is the kind of logic that would justify the invasion and occupation of any country.

A document, released by the CTA’s Department of Information and International Relations, also refers to the Adhesion Agreement concluded in 1906 between the Manchu government of China and the United Kingdom.

These governments signed the agreement “without the participation or knowledge of Tibetan authorities,” and it recognised the existence of the “British sphere of influence in Tibet and introduced a concept of Manchu suzerainty over Tibet.”

Further, the infamous 17-Point Agreement, signed in 1951 between representatives of the Tibetan government and the communist state, ostensibly presented as a mutual agreement, was nothing more than a unilateral ultimatum drawn up by China.

Meanwhile, the CTA document is important for several reasons.

First, it conveniently documents the egregious violations of human rights by the CCP in Tibet. Second, it reveals the spectacular contempt of the CCP for the application of accepted rules of international law regarding the sovereignty of member states and the protection of fundamental rights. Third, it points to the intentions of the CCP with regards to Taiwan, which it seeks to conquer.

With regards to human rights, the CTA publication documents the CCP’s Orwellian surveillance strategies in Tibet; the marginalisation of the Tibetan language; disruption of religious traditions, including the Buddhist belief in reincarnation and rebirth; adulterated food supplies and the existence of a precarious health system; the practice of torture; and wholesale environmental devastation and degradation.

In addition, there are reports of self-immolation, especially since the failed uprising of 2008, precipitated by monks who called for freedom for Tibet and demanded the return of His Holiness the Dalai Lama. The recently reported self-immolation protest by 26-year-old Tibetan named Shurmo happened on Sept. 17, 2015. The CTA estimates that there have been 155 known cases of self-immolation.

Currently, there is no freedom of movement in Tibet. In this context, the document states that movement “is systematically violated with the imposition of explicit restrictions, including local directives prohibiting overseas travel, passport confiscations, and issuing of threats and intimidations to Tibetans in Tibet against travelling.”

Freedom House ranks Tibet as the least free region in the world. This certainly reflects the appalling treatment of Tibetans inside Tibet.

It is a region that is effectively off-limits to journalists and outsiders, and hence, is an impenetrable fortress.

The Chinese Constitution, with its impressive list of fundamental rights, is meaningless because the CCP trumps everything.

This is abundantly clear when reading Article 4 of its constitution, which vacuously states that China protects the “interests of the minority nationalities and upholds and develops a relationship of equality, unity, and mutual assistance among all of China’s nationalities” and that oppression of any nationality is prohibited.

It also stipulates that, “All nationalities have the freedom to use and develop their own spoken and written languages and to preserve or reform their own folkways and customs.”

China’s occupation of Tibet also violates Article 2 (4) of the Charter of the United Nations, which expressly requires member states to “refrain in their international relations from the threat or use of force against the territorial integrity or political independence of any state.”

Similarly, Article 1 (1) of the International Covenant on Economic, Social, and Cultural Rights confirms that, “All peoples have the right of self-determination. By virtue of that right, they freely determine their political status and freely pursue their economic, social and cultural development.”

An interesting aspect of the document seeks to explain the CCP’s interests in the occupation of Tibet. The authors suggest that the reasons are strategic and geopolitical rather than cultural.

China always regarded Tibet as the backdoor into China. Therefore, its conquest would not only offer protection to China but also enable it to secure access to the whole of Asia. Also, Tibet is minerals-rich, which may be a reason for China’s interest in the region.

The document concludes that the occupation “was purely strategic in nature and is driven by China’s expansionist ambition.”

It is a reminder of what could happen to a people when the international community allows or even condones the rapacious behaviour of an aggressive country.

After 70 years, few people in the West recall the history of Tibet and, by their ignorance, contribute to the collective amnesia suffered in general.

As collective memory fades after such a long time, reminding people of this sordid saga of aggression becomes necessary. It also serves as a harbinger of what China might have in mind for Taiwan.

The international community can thus learn from Tibet’s occupation and oppression to prepare itself properly for the defence of a democratic Taiwan.

The reading of this document will inform and energise people with an interest in international affairs, international law, and the decent and civil interaction between the nations of the world.