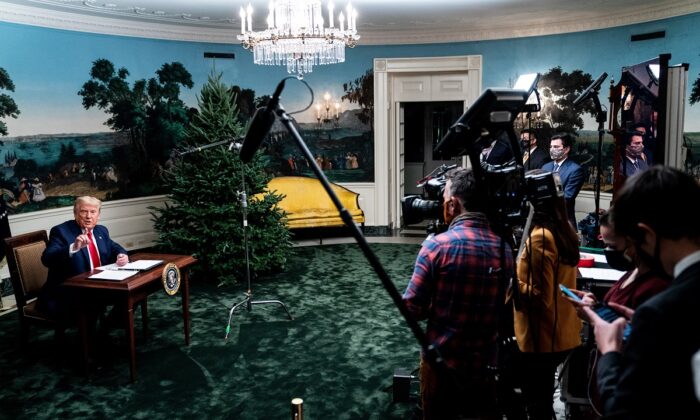 President Donald Trump speaks in the Diplomatic Room of the White House in Washington on Thanksgiving on Nov. 26, 2020. (Erin Schaff/Pool/Getty Images)
Viewpoints

On Thanksgiving Day, President Donald Trump held a press conference, and the media relentlessly pressured him with questions about whether he would leave the White House, in effect repeatedly calling on him to concede. The scene reminded me of the Cultural Revolution in China and how the media attacked Liu Shaoqi.

Liu, the Chinese regime’s chairman between 1959 to 1968, was attacked by the media day and night after the leader of the Chinese Communist Party (CCP) decided to get rid of him. Within a few days, he was removed. Abused, he died alone, without even his family being informed. At the crematorium, he was an anonymous body—the workers didn’t even know this was a former high official. Parades celebrating his downfall were held nationwide.

When I was growing up in China, the communist state-run media were the only voices we were exposed to. We were told that only the CCP could take care of the people. Socialism was the only correct path for human life, and the only way to provide us with a happy life.

As I grew older, immigrated to America, and lived a different life in which I read more and traveled more, I started to understand that the communist media machine is like poison. It poisons minds and plagues society.

The communist media are not meant to inform. They are a machine the communists created to lie. It is made to hide the truth and to use lies to control the people. It is not meant for small lies, but to systematically lead the entire society to believe in its lies.

By pushing a theory, a narrative, an ideology that is against human nature, against human tradition, and against our cultural heritage, they can brainwash the entire country to such an extent that there is no longer any standard of right and wrong. They actually set up the opposite standard: Evil is treated as right, and good as wrong.

The communist media are not meant to foster mutual understanding. They sow division. The communists destroy human society by driving people into opposite groups, creating hatred and leading people to fight.

Because of communist propaganda, peasants killed landlords, workers killed business owners, and within every small group, people killed each other. This is why in the Soviet Union, Russians killed Russians, and in communist China, Chinese have killed Chinese. Under communism, 80 million Chinese have been killed, more than the total number of deaths in the two world wars combined.

Communist propaganda can be hard to spot because it disguises its evil intentions with political correctness. The communists claim that they are “serving people,” achieving “equality,” and “helping the poor.”

It sounds like idealism, which is why it has been effective in attracting young people. Before communism took over China, it named itself the “savior” of the people. Once it took power, communist leaders got busy fighting for power among themselves and enjoyed a comfortable life. The rich became poor, and the poor became poorer.

Here in the United States, we now can see our media acting like those in communist countries.

CNN and The New York Times dress themselves in good intentions by telling us we have a serious problem with racism, just as the communist media claim to be serving the people. In fact, by pushing this narrative of racism, the mainstream media in the United States are fomenting division. It is no accident that this summer we saw young people rioting and burning in our big cities. They have been trained to hate, just the communists trained the Chinese people to hate.

But in China, the tool used was class struggle. “Racism” in the United States is for our mainstream media what class struggle was in China.

In reporting on America in the world, the mainstream media portray the United States as evil and say it should feel guilty for its power and prosperity. This is similar to how the media in communist countries call on the rich to confess their sins.

The mainstream media have told us America is in decline, which is exactly what the propaganda of the Soviet Union said and what the CCP media have been saying. The communist media have never stopped calling on America, the free world’s leader, to concede.

On Thanksgiving, we saw the mainstream media pressuring Trump to concede. In fact, these media outlets have never accepted Trump as legitimate.

For instance, according to the Media Research Center, in March through May this year, coverage of Trump by ABC, CBS, and NBC was 94 percent negative, with the coverage reaching an unprecedented 99.5 percent negative in May. Since Trump was elected, the center has regularly found network coverage that was 90 percent or more negative.

This unanimity of perspective is what one expects out of communist media. It is a propagandistic attack.

As with the political correctness employed by communists, behind this unanimity is a conviction that Trump and conservatives simply have no right to their opinions.

Hundreds or even thousands of people have come forward to expose fraud in the 2020 election, but the U.S. mainstream media have not reported what they have to say. This is a deliberate control—or censorship—of people’s voices.

The nonstop attacks on an opposing leader, the political correctness, the silencing of viewpoints—these are all the hallmarks of a communist-style press.

The United States has been the envy of the world for its freedom and prosperity, and American media have been considered the exemplar of a free press. Media in other countries follow American media and trust them. Do we still have a free press in this country? If America falls, the whole free world falls. Who will win? America or the communists?