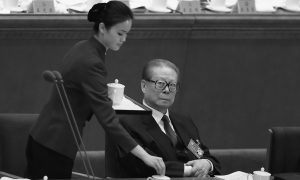 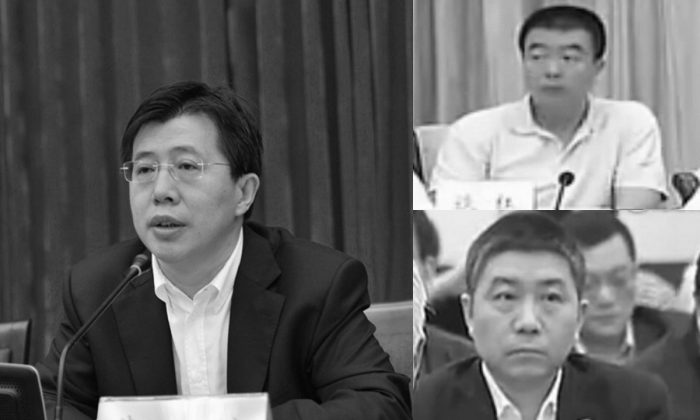 Ji Wenlin (L), Tan Hong (R-Top), and Yu Gang (R-Bottom) were stripped of their Party memberships on July 2, according to an announcement by anti-corruption authorities. All three men had close ties with former security boss Zhou Yongkang, believed to be in the crosshairs of Party leader Xi Jinping. (Screenshot/ifeng.com/gcpnews.com)
China

Three officials in the Chinese regime’s security apparatus were on July 2 ejected from the Communist Party, dismissed from their public posts, and had evidence related to their alleged crimes transferred to judicial organs for prosecution, according to a recent announcement by the Party’s anti-corruption taskforce.

The men—Ji Wenlin, Yu Gang, and Tan Hong—occupied different ranks and posts at the time of their dismissal, but each of them share ties of one sort or another with Zhou Yongkang, the former Party security czar who is himself believed to be under a massive investigation—lasting for well over a year now—ordered by Party chief Xi Jinping.

Charges against the three men were almost identical: “Using the conveniences of an official post to provide benefits for others, receiving and demanding enormous bribes.” Ji Wenlin and Yu Gang had the ignominious addendum of “engaging in adultery,” and were removed from both the Party and government, while Tan was only said to be removed from the Party.

Ji Wenlin, 48, former vice governor of southern China’s Hainan Province, shared the most prominent and extensive ties with Zhou Yongkang. He served as secretary to Zhou’s office for 10 years, from 1998 to 2008, and followed Zhou from his powerful posts in the petroleum sector into the public security apparatus in Sichuan Province, according to his official resume.

Ji’s posts include, from 2005 to the end of 2008, deputy director of the Public Security Bureau’s General Office, a political appointment that oversees key personnel and paperwork streams, and deputy director and secretary of the Central Stability Maintenance Work Leading Small Group, which, among other things, was responsible for coordinating the massive ramping up in security spending before the Olympic games in Beijing.

The “stability maintenance” apparatus gained a budget of over $100 billion under Zhou Yongkang’s rule, forming what many political analysts called a second center of power in the Communist Party, threatening the authority of even the General Secretary of the Party Hu Jintao, and at one stage seeming to imperil the transition to Xi Jinping.

Jiang Zemin, the former Party leader, remained a shadowy presence in the background as his underlings carried out these machinations—in early 2012 almost resulting in an attempted coup d’état, as Bo Xilai, the former Politburo member now imprisoned for life, and Zhou Yongkang, lunged for power, political analysts say.

In 2010, Ji was transferred to Hainan Province, in 2011 promoted to be the mayor of Haikou, the capital, and in 2013 became the youngest deputy governor of the province.

Ji is the fourth of Zhou’s secretaries to be sacked. The other three are: Guo Yongxiang, former President of the Sichuan Federation of Literary and Art Circles, an artificial cultural organization meant to enhance the Communist Party’s control over the arts; Li Hualin, former vice general manager at PetroChina, the public arm of China’s largest state-run oil company; and Li Chongxi, the chairman of Sichuan Province’s Chinese People’s Political Consultative Conference, another Party-controlled entity meant to bring non-Party elites into the fold.

Ji Wenlin worked closely with all other three secretaries at various points during their careers.

The post of secretary held by these men is something akin to a personal assistant with a Party twist, a role that in part handles the logistics, security, backroom dealings, and personnel networks of the boss, according to Li Chengyan, a professor at Peking University, as quoted in Chinese media reports. Secretaries also handle bribes for their master’s, control who gets to see them, and run errands.

The other two officials who were removed share other personal ties with Zhou Yongkang.

Tan Hong (whose name, when translated into English, means “Speaking Red”) was a former staff officer at the Ministry of Public Security’s Guard Bureau, which provides the personal security services for the Party’s leaders, high level officials, and important visitors to China. Caixin, a business publication in China, said that Tan was at one point in charge of personal security for Zhou.

Yu Gang was the former deputy office director of the Political and Legal Affairs Commission, the top Party agency that controls the entire security apparatus, including the procuratorate, court system, jails, ad hoc detention facilities, police forces, secret police, armed police, and more. Yu was the final deputy director of the office when it was under the stewardship of Zhou Yongkang from 2007 to 2012; as such he would have been privy to many of the details of the internal operations of the PLAC.

Tan Hong and Yu Gang were taken away by police for investigation last December, the same time that Zhou’s son and daughter in-law were reportedly put under investigation, reports say. The men are only now being stripped of their Party membership, with presumed prosecution by judicial authorities to follow. That, too, is an affair tightly orchestrated by the Party.