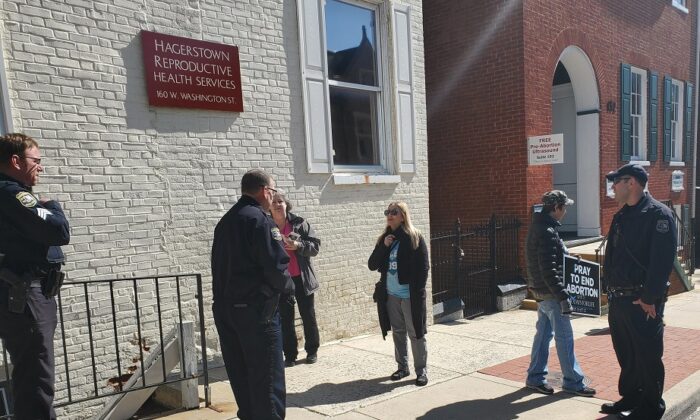 Under legal pressure, officials in Hagerstown, Maryland, backed away from a local policy aimed to combat the CCP virus by preventing religious pro-life activists from praying on a public sidewalk outside an abortion clinic.

The development comes as several states have relaxed containment measures targeting the expression of religious beliefs and a handful of others are preparing to scale back stay-at-home orders. It also comes as states such as Michigan, which on April 14 dropped charges against pro-life sidewalk counselors, are backing away from limiting pro-life activists’ free speech rights outside abortion clinics as part of an effort to prevent the spread of the CCP (Chinese Communist Party) virus, commonly known as the novel coronavirus and which causes the disease COVID-19.

In the case at hand, police in Maryland’s sixth-largest city originally threatened pro-life advocate Wanda King with a $5,000 fine for engaging in constitutionally protected speech on the public sidewalk outside Reproductive Health Services, an abortion clinic, based on their interpretation of the emergency public health order issued by Gov. Larry Hogan, a Republican.

“We are pleased that Hagerstown authorities have recognized and corrected their previously erroneous view of our clients’ constitutional rights to free speech and free exercise of religion,” said Michael McHale, counsel at the Chicago-based Thomas More Society, a national not-for-profit public-interest law firm that specializes in religious freedom issues.

“As long as abortion vendors continue to put women and children at risk—even during a state of emergency when all other elective procedures are banned—there will be a need for Ms. King and other life advocates to be near the abortion facility, offering hope and information on life-affirming alternatives to abortion.”

It was April 2 when King and about seven other persons stood on a public sidewalk outside the clinic while keeping six feet away from each other, as required by social-distancing guidelines. The individuals displayed pro-life signs and engaged in silent prayer and pro-life speech. Three police officers approached the group and ordered them to leave the area, which they did, according to a draft federal legal complaint obtained by The Epoch Times.

The draft complaint was never filed with the court.

King and one other pro-life individual returned to the same sidewalk on April 7 and resumed their peaceful demonstration, staying 15 feet away from each other. Police informed King that she had no right to be there and that she would be fined $5,000 if she remained there when the police returned a while later. The police came back about two hours later and prepared to issue a citation to King but one of her friends drove up and offered to take her home. The police allowed King to leave and directed her to stay home.

The Thomas More Society sent a demand letter April 14 to Hagerstown Mayor Bob Bruchey, a Republican, as well as the city attorney, and local police chief, asking the authorities to respect the right of King and others to engage in peaceful pro-life speech and prayer outside the clinic.

The city responded, stating that King and others could return to the sidewalk if they agreed to maintain social distancing, limit the size of their group to 10 people, and continuously walk around the large city block where the facility is located.

Unsatisfied, the Thomas More Society sent another letter to the officials, arguing that the continuous walking requirement was unconstitutional because it ran afoul of at least two federal court rulings.

“Similarly here, conditioning our clients’ right to express their message on a duty to continue walking around the block is a plain, palpable violation of their fundamental rights and is not substantially related to furthering the City’s interest in slowing the spread of COVID-19,” the letter states.

The city failed to respond to the subsequent letter and the firm then sent the officials a draft lawsuit. That prompted city officials to back down and agree that the activists wouldn’t have to continuously walk around the block in order to engage in pro-life free speech on the public sidewalk.

The city “conceded, agreeing that our clients can engage in pro-life free speech outside the abortion facility as long as they maintain social distancing, and have no more than 10 people while Maryland is under its current state of emergency,” McHale said.

Across the country, “city governments have recognized that pro-lifers have a right to be on the sidewalk outside abortion facilities at this time.”

Bruchey suggested that the legal jockeying involved in this case could have been avoided.

“I’m a firm believer in the First Amendment and all amendments to the Constitution,” Bruchey told The Epoch Times in an interview.

Even though the governor’s order doesn’t provide an exemption for protests such as those outside the abortion clinic, he said, “I have absolutely no problem with that happening if they were keeping with their social distancing and keeping to a group of 10 or less.”

If he’d received one telephone call from an activist before the law firm got involved, “it would have made all the difference in the world,” the mayor said.