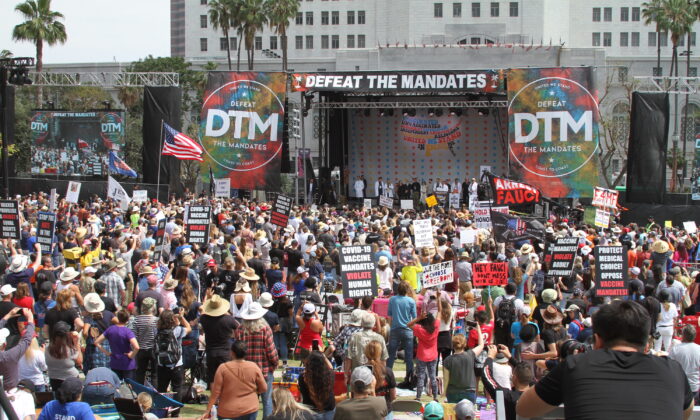 Speakers at the event included dozens of big names in the battle against the mandates, including lead truckers in The People’s Convoy Brian Brase and Mike Landis.

“So, we started in California, and weee’re baaackk,” Landis said.

The convoy left Adelanto, California on Feb. 23, and arrived in the Washington, D.C.-area in early March. The truckers are planning to stay in Southern California for most of the week and head to Sacramento next weekend in time for a protest on April 18.

“We won’t be too hard to miss,” Landis said. “I hope I see all of you along. Your voices need to be heard.”

The convoy plans to remain in the Sacramento area for a week or two to let legislators know “we don’t like what they’re doing,” he said.

The truckers have joined forces with doctors and are fighting COVID-related proposed legislation in California, Landis said.

Earlier in the day, Landis told The Epoch Times that The People’s Convoy is opposed to “the tyrannical 10” bills, listed on its website.

The convoy supports freedom, constitutional rights, human rights, and the God-given rights of the people to choose whether they want to get a vaccine or not, he said.

Brian Brase told the crowd that the vaccine mandates are a violation of human rights.

Brase said more than 7,000 first responders just in L.A. County are about to lose their jobs for standing up, and praised L.A. County fire station No. 68 for taking a stance.

“The People’s Convoy has your back,” he said to all first responders in Los Angeles and across the nation.

Malone told the crowd the fight against vaccine mandates has become a “global war.”

“The other day, I was in Paris and I drove by a little church,” he said. “It was the Church of St. Augustine, the doctor of the Roman Catholic Church who famously said, ‘The truth is like a lion. You don’t have to defend it. Let it loose. It will defend itself.’

“This is not just here in the United States. The same things are happening everywhere—in Latin America, Africa, all across Asia, and in Europe, as well as North America, and God save the Canadians,” Malone said.

“What I’ve seen cannot be unseen,” Malone said. “He must be stopped before he and his party can expand their totalitarian mandates and laws. There is no medical emergency. There is no justification for these laws that the California Democratic Party and the World Economic Forum allies want to push on us.

“Regarding the genetic COVID vaccines, the science is settled: They’re not working to prevent infection replication, the spread of Omicron, and they’re not completely safe,” he said.

“All medical procedures, vaccines, and drugs have risks. All of us have the right to understand these risks, and to decide for ourselves whether we willingly accept these risks. To deny this is to deny human dignity. These censorship and propaganda campaigns disrespect us,” he said.

In an interview preceding his speech, Dr. Paul Marik told The Epoch Times the world has been brainwashed.

“The vaccines do not work. They’re neither safe nor effective, and it’s about time the American people and people across the world woke up to the reality they have been brainwashed. There’s no question. This is brainwashing and indoctrination,” Marik said.

Too many hospitals are more interested in money, politics, and control than they are in health care and have become “a dangerous place for sick people,” he said.

One father, Ernest Ramirez, said his son died just days after getting a COVID vaccine, while a nurse, Angelia Desselle said she has suffered permanent disabilities from a vaccine.

Correction: America’s Frontline doctors was not affiliated with this event. The Epoch Times regrets the error.