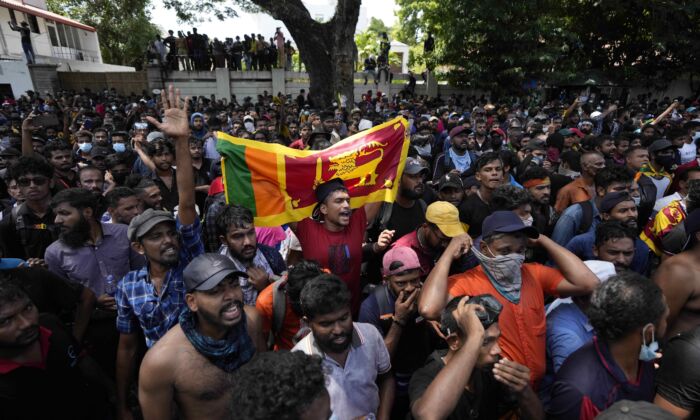 COLOMBO, Sri Lanka—Sri Lankan President Gotabaya Rajapaksa fled on a military jet on Wednesday after angry protesters seized his home and office, and appointed Prime Minister Ranil Wickremesinghe as acting president while he is overseas. Wickremesinghe quickly declared a nationwide state of emergency to counter swelling protests over the country’s economic and political collapse.

Rajapaksa had earlier pledged to resign Wednesday, and Parliament Speaker Mahinda Yapa Abeywardena said the president assured him he would still do so. If he does, a new president is to be elected by Parliament on July 20. Wickremesinghe has also promised to resign, but not until a new government is formed.

His appointment as acting president failed to calm thousands of protesters who stormed his office compound on Wednesday demanding he step down. Over the weekend, protesters wanting him to leave politics burned down his private residence.

A six-time prime minister, Wickremesinghe’s latest term is arguably the most challenging. Appointed in May by Rajapaksa, he was brought in to help restore international credibility as the government negotiated an economic bailout package with the International Monetary Fund.

Wickremesinghe, who is also finance minister, became the public face of the economic collapse, which has triggered severe shortages of food, fuel, and medicines. He has delivered weekly addresses in Parliament as he kicked off difficult negotiations with financial institutions, lenders, and allies to fill government coffers and give some relief to impatient citizens.

He raised taxes and pledged to overhaul a government that had increasingly concentrated power under the presidency, a model many say tipped the country into crisis.

In his new job, he left little doubt about the grave future ahead. “The next couple of months will be the most difficult ones of our lives,” he told Sri Lankans in early June, a few weeks before saying in Parliament that the country had hit rock bottom. “Our economy has completely collapsed,” he said.

Ultimately, observers say, he lacked both political heft and public support to get the job done. He is the only member of Parliament in his party after it suffered a humiliating defeat in a 2020 election.

His reputation had already been sullied by his previous stint as prime minister, when he was in a difficult power-sharing arrangement with then-President Maithripala Sirisena. A communication breakdown between them was blamed for intelligence lapses that led to Easter Sunday suicide bombings of churches and hotels in 2019 that killed 290 people.

With no respite for citizens waiting in line for fuel, food, and medicine, Wickremesinghe became increasingly unpopular. Many protesters say his appointment simply put off pressure on Rajapaksa to resign. But analysts are doubtful whether a new leader can do much more, instead fearing that political uncertainty will only intensify the crisis.