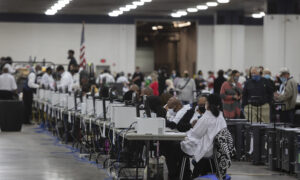 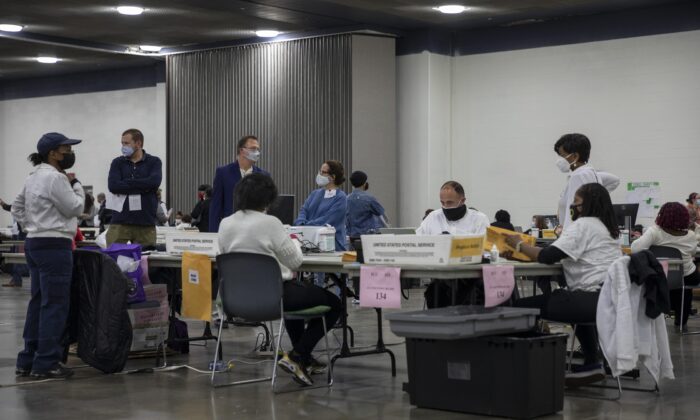 Poll challengers watch workers with the Detroit Department of Elections inspect and sort absentee ballots at the Central Counting Board in the TCF Center in Detroit, Mich., on Nov. 4, 2020. (Elaine Cromie/Getty Images)
Election Integrity

Thousands of mail-in ballots from people who weren’t properly registered to vote were added to vote counts in Detroit, Michigan, a poll watcher alleged in a sworn affidavit.

Robert Cushman of Michigan said he observed the allegedly illegal activity when serving as a poll challenger in Detroit’s TCF Center where votes from Wayne County were counted.

His affidavit is among several attached to a lawsuit filed against Wayne County and Detroit on Nov. 8 by the Great Lakes Justice Center, a conservative-leaning nonprofit.

The suit asks the court to order “an independent and non-partisan audit” of the election, prevent the city and county from destroying evidence or certifying the election results or counting more votes until the suit is heard, order a new election, and other relief.

According to the affidavit, Cushman was told that military ballots will be counted last, but when those were finished, he “was surprised to see numerous new boxes of ballots arrive” in the evening of Nov. 4.

Yet the names on the new ballot packages were neither in the poll book nor on the sheets, he said. The operators were simply adding the names and addresses to the poll book with made-up birth dates, such as 1-1-1900.

“When I asked what the possible justification was to counting ballots from unknown, unverified ‘persons,’ I was told by election supervisors that the Wayne County Clerk’s Office had ‘checked them out,’” he said.

He was told the instruction to enter fraudulent birth dates came from the Wayne County Clerk’s Office, he said.

The Wayne County Clerk’s Office didn’t immediately respond to a request for comment.

David Fink, Detroit’s lead attorney on the case, said the lawsuit was “belated” and was “raising baseless allegations to try and undermine confidence in a well-run election.”

“Like two previous lawsuits, this case is not based upon actual evidence of any election fraud or misconduct, it is based upon various conspiracy theories, which have already been debunked,” he said in a statement emailed to The Epoch Times. “We are confident this case, like the others filed last week, will be dismissed.”

The fact that only five of more than 200 Republican challengers in the room at the TCF Center joined the suit “actually tells us how well the process was run,” he said.

“I said that I did not want to challenge just one ballot, but the entire process, as I was witnessing several thousand ballots inputted illegally,” he said.

Another poll watcher, Michigan lawyer and former Michigan Assistant Attorney General Zachary Larsen, made a similar allegation in his affidavit for the lawsuit.

He was at the TCF Center since the morning of Nov. 4, he said. Just before noon, he came to a table where another Republican poll watcher told him that many ballots “did not register in the poll book but that were nonetheless processed.”

He then observed that an official processing a ballot entered a new name in the poll book and then proceeded to “make a handwritten notation” on the supplemental sheets.

“I was concerned that this practice of assigning names and numbers indicated that a ballot was being counted for a non-eligible voter who was not in either the poll book or the supplemental poll book,” he said.

“From my observation of the computer screen, the voters were certainly not in the official poll book. Moreover, this appeared to be the case for the majority of the voters whose ballots I had personally observed being scanned.”

When he tried to position himself so he could see the names on the Supplemental Sheets, he was told he had to stand at least six feet away due to COVID-19 regulations. His objections that it’s not possible to discern the writing from six feet away were dismissed, he said.

Jessy Jacob, a city of Detroit employee, signed an affidavit saying she was instructed to backdate mail ballots and not to look for any deficiencies with the ballots.

She said she was told not to ask for identification when voters arrived to vote in person.

She further alleged that she “directly observed, on a daily basis, City of Detroit election workers and employees coaching and trying to coach voters to vote for Joe Biden and the Democrat party.”

Poll watcher Andrew Sitto said tens of thousands of ballots arrived in Wayne County around 4:30 a.m. Of the ballots from this batch he saw being processed, all were for Biden.

Other poll watchers told him the ballots arrived in “several vehicles with out-of-state license plates,” his affidavit said.

Yet another poll watcher affidavit alleged voting machines used in Wayne County appeared to have been connected to the internet.

Biden, former vice president, held a 146,137 vote lead over President Donald Trump in Michigan as of the afternoon of Nov. 9. Neither Michigan nor any other state has certified the results of the elections.

The Trump campaign is suing in Pennsylvania and Arizona, challenging alleged election irregularities. Wisconsin and Pennsylvania are headed for recounts.