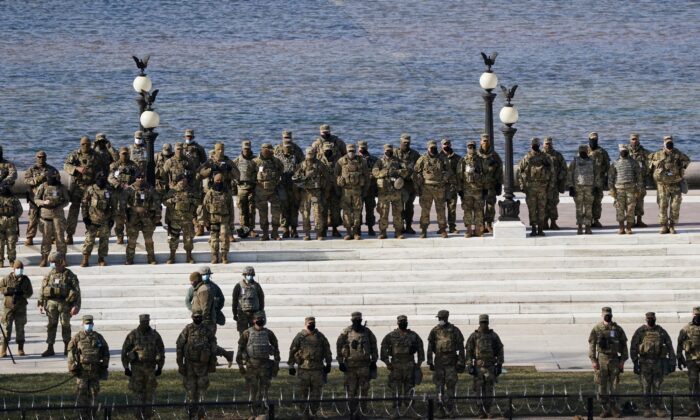 National Guard members stand during the 59th Presidential Inauguration near the U.S. Capitol in Washington on Jan. 20, 2021. (Erin Schaff/Pool via Reuters)
US News

Thousands of National Guard Troops to Remain in DC Through March

At least 5,000 National Guard members will remain in Washington through mid-March, a spokesman for the agency confirmed to The Epoch Times.

The U.S. Army didn’t respond to a request for comment.

Tens of thousands of National Guard personnel poured into the nation’s capital for the inauguration of President Joe Biden. Over 26,000 were on duty on Jan. 20, as part of a heavy militarization of Washington.

Guardsmen experienced no security incidents and only three people were arrested in Washington on Inauguration Day, agencies said.

About 10,600 Guard personnel were on duty as of Thursday. Officials were planning for how to return the rest of the troops to their home states.

“Some agencies are requesting continuity of operations, additional support, and recuperation time for their forces to regroup. Approximately 7,000 National Guard personnel are anticipated to provide that assistance through the end of the month,” the guard said in a statement on Thursday.

Christopher Rodriguez, a District of Columbia homeland security official, said that same day that the city requested continued support from the Guard with traffic management and crowd control through Jan. 30 “because we do anticipate that there will be another National Special Security Event occurring in the joint session of Congress.”

The numbers of troops needed were still being calculated, he said.

Three governors on Friday said they were requesting the return of their troops.

“I’ve ordered the immediate return of all New Hampshire National Guard from Washington D.C.,” New Hampshire Gov. Chris Sununu, a Republican, said in a tweet. “They did an outstanding job serving our nation’s capital in a time of strife and should be graciously praised, not subject to substandard conditions.”

Florida Gov. Ron DeSantis, a Republican, echoed the disenchantment of other governors with the way the FBI vetted all troops in Washington, resulting in the removal of at least 12, while saying on “Fox & Friends” it was time for the troops to leave the “half-cocked mission.”

Legislators expressed outrage earlier in the week when pictures emerged showing members spending time in a parking garage. The U.S. Capitol Police denied telling the guard to leave the U.S. Capitol. Lawmakers have vowed to figure out what happened.