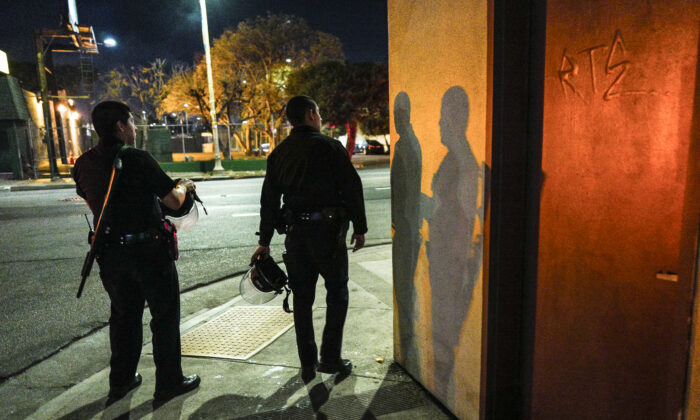 Drake Madison, an officer with Los Angeles Police Department (LAPD), told The Epoch Times that as of Jan. 20, there were 1,134 out of approximately 12,200 employees who had tested positive and were quarantining at home. This figure has increased by over 40 percent since Jan 11.

The total number of officers who were out due to COVID-19 was 89 during the week ending on Christmas, according to LAPD Chief Michel Moore.

In addition to city law enforcement, the sheriff’s department also has been heavily impacted by the significant surge in COVID-19 cases.

As of Jan. 20, the Los Angeles County Sheriff’s Department had a total of 891 police officers in quarantine out of 18,000 employees. Among the quarantined personnel, 632 were sworn officers.

The positivity rate has also seen a rise among vaccinated personnel in LASD. On Jan. 15, approximately 45 percent of the employees who tested positive were vaccinated.

In its custody division, there were a total of 127 individual in custody who had tested positive are symptomatic, while 505 were asymptomatic.

A recent report shows on-duty deaths of law enforcement officers across the country for any cause, including COVID-19, were up approximately 55 percent in 2021.

There were 458 total law enforcement officers in the United States killed on-duty, and 301 of those deaths were counted as from COVID-19 since the officers contracted the virus while on-duty, according to the report (pdf) compiled by the National Law Enforcement Officers Memorial Fund (NLEOMF).

“It has been reported to NLEOMF that these officers have died due to direct exposure to the virus during the commission of their official duties,” the report reads.