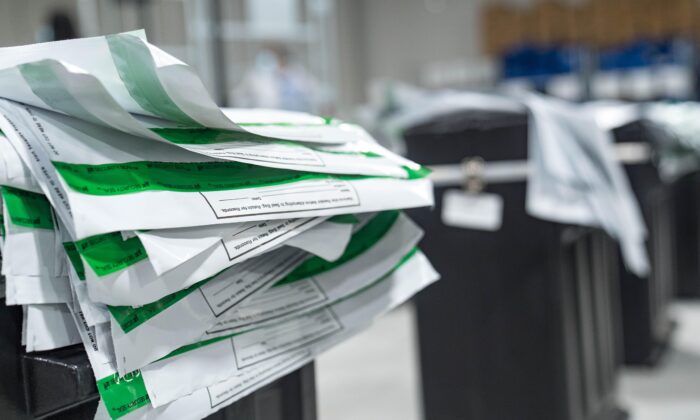 Envelopes that had previously held ballots in Gwinnett County are seen as workers begin their recount of the ballots in Lawrenceville, Ga., on Nov. 13, 2020. (Megan Varner/Getty Images)
Election Integrity

Thousands of people registered and voted in Georgia using addresses of postal facilities or businesses, while making it look like they were residential addresses, according to a former Trump campaign official whose team analyzed the states’ voter data.

The addresses listed on the voter rolls included information that didn’t make sense for the actual locations, but on paper made the addresses look like residential ones, according to information published by Matt Braynard, former data and strategy director for President Donald Trump’s 2016 election campaign.

“Georgia: We have identified over a thousand early/abs votes cast by individuals whose registered addresses are in fact at post offices, UPS, and FedEx locations, wilfully disguising the box numbers as ‘Apt,’ ‘Unit,’ etc.,” he said in a Nov. 22 tweet.

He published a sample of 15 such address entries in a Nov. 24 tweet.

“With just a partial review of the state,” he said, the team also discovered “a thousand votes cast by those registered in non-residential, purely commercial addresses also disguised with ‘Apt.,’ etc.”

He added that these were “the residential addresses, not mailing addresses” that the voters have listed.

Nearly all those “who disguised a postal facility as their residential address” used an absentee ballot to vote, he said.

Georgia election law says that “the residence of any person shall be held to be in that place in which such person’s habitation is fixed, without any present intention of removing therefrom.”

Anyone who “knowingly gives false information when registering as an elector” can be charged with a felony and put in prison for up to 10 years or fined up to $100,000, the law says.

The office of Georgia Secretary of State didn’t immediately respond to a request by The Epoch Times for comment.

Braynard previously reported that large percentages of voters in several battleground states said they returned their absentee ballots, even though the states’ data indicated they hadn’t.

Of the 1,137 Pennsylvania GOP voters reached by telephone who did request a ballot, nearly 42 percent said they mailed the ballots back, although state data shows the ballots weren’t received or counted, he said.

The office of the Pennsylvania Secretary of State didn’t immediately respond to a request for comment.

In Arizona, 50 percent of voters (regardless of party affiliation) reached over the phone had the same story, as well as 44 percent in Georgia, nearly 33 percent in Michigan, and 20 percent in Wisconsin.

Correction: A previous version of the article incorrectly identified the kind of voters called by Matt Braynard’s project in states other than Pennsylvania. The project called voters regardless of party affiliation. The Epoch Times regrets the error.