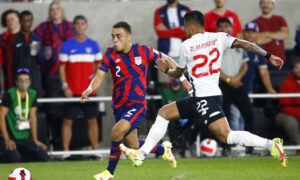 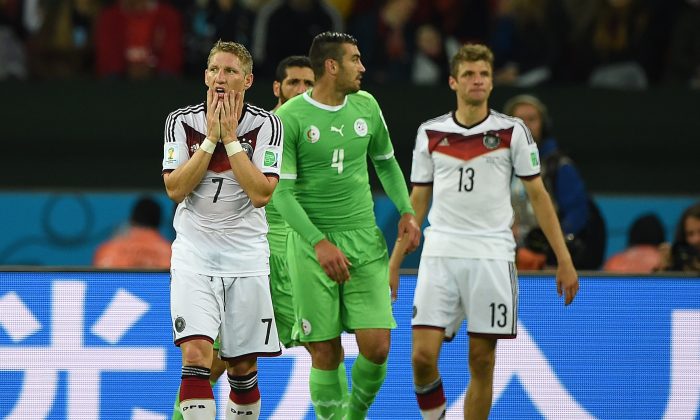 Germany's midfielder Bastian Schweinsteiger (L) reacts after missing a free-kick during a Round of 16 football match between Germany and Algeria at Beira-Rio Stadium in Porto Alegre during the 2014 FIFA World Cup on June 30, 2014. (KIRILL KUDRYAVTSEV/AFP/Getty Images)
Soccer

The most creative, but failed, free kick at the World Cup is really a training ground move.

Germany was awarded a free kick in the 88th minute against Algeria in their second round match.

Bastian Schweinsteiger first ran up and stepped over the ball, before proceeding to run a circle around the ball.

This was a prompt for Thomas Müller to start running behind the Algerian wall, but he stumbled. The Bayern Munich forward quickly picked himself up and made the dash anyway.

Fortunately, or unfortunately, for Müller, the actual free kick taker, Toni Kroos, mishit the ball when he tried to chip it over the Algerian wall, and the ball was cleared easily.

After the match, Mueller told German television, “it almost worked,” and did not rule out trying it again.

Kroos told German television the move had worked in training, “but it looks awful when it doesn’t work.”