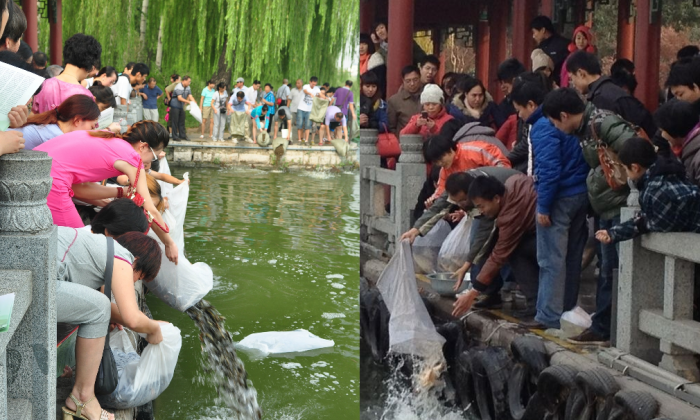 According to Chinese Buddhist folk tradition, the first day of the second month in the Chinese lunar calendar is a time when people participate in the practice of fangsheng, meaning animal release, by purchasing animals marked for slaughter and then letting them go into the wild.

This year, fangsheng falls on March 9 in the western calendar.

One would think that such a humanitarian act should be applauded, but unfortunately, humanely purchasing animals and fish just so they can be released has proven detrimental to the ecological balance in at least one Chinese lake.

Qilu Evening News of eastern China’s Shandong Province reported on March 10 that water in the local Daming Lake, a popular tourist location, is now polluted with the stench of dead fish following the ceremony.

According to environmental workers, injured or otherwise unhealthy fish intended for market, that is, the sort bought by participants in fengsheng, cannot survive well in the wild.

“The scales of many fish are damaged and the fish may at the brink of death anyway,” Su Jian, the environmental department chief at Daming Lake, told Qilu Evening News. “Also some of the white fish are not suited for the environment.”

The fish then die off in large numbers and pollute the marine environment as they rot. Lake staff say that the death rate of the released fish is between 60 and 70 percent. The mass of corpses to be disposed of is difficult to deal with as they tend to float to the surface after significant decay. As a result, they disintegrate easily when pulled in by nets.

Carp and goldfish are some of the most common species released into Daming Lake.

In past years, before access to cars was common, only a manageable amount of fish would be released into Daming Lake, but now, many Chinese eager to do their part for the animals are inadvertently undermining the spirit of the Buddhist custom.

The influx of non-native species—tortoises, catfish, frogs, and the Asian swamp eel, in addition carp and goldfish—has caused other problems.

Lotus flowers that used to proliferate the northern edges of Daming have been decimated as the carp like to feed on aquatic plants. Native species, such as prawns and water rats, have been pushed out of their former niches.

In addition to fish, some people have thrown in large numbers of river snails, which then breed at uncontrollable rates. The snails crawl into underwater equipment and pipes. In 2014, workers sawed open the clogged drainage pipe of a public restroom to find that the entire pipe was full of snails.