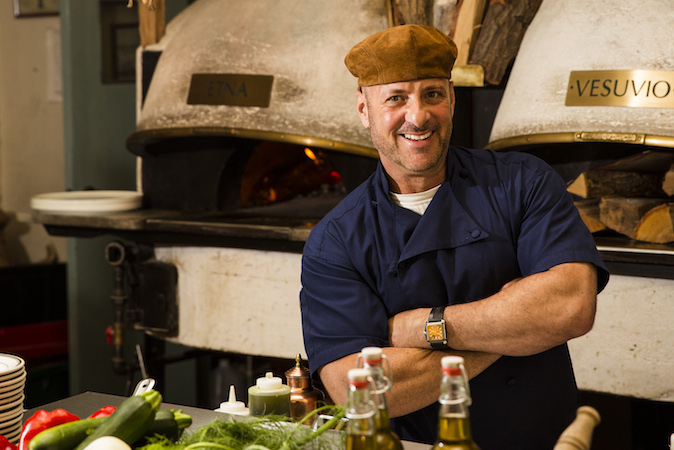 This Man Is on Fire

Nicola Accardi cooks with volcanoes. Two of them in fact, etched with their names, Etna and Vesuvio. The double-chambered wood-burning oven weighs in at 7,000 pounds, as heavy as two cars, sitting at the back at his restaurant Tavola, in Hell’s Kitchen.

Chef de cuisine Giancarlo Dellanzo and chef/restaurateur Nicola Accardi putting finishing touches on a pizza before putting it in the oven. Behind them, the double-chambered wood oven. (Edward Dai/Epoch Times)

Crafted by the Acunto family in Naples, and insulated with volcanic clay from Vesuvius, the oven produces astonishingly high temperatures, going up to 900–950 degrees Fahrenheit.

But there’s no thermostat on this oven. Only the artistry of the human eye and hand can tame the fire living in the confines of these temperamental ovens.

“Gas ovens are a lot more forgiving,” said Accardi. A pizza in a gas oven for example takes eight minutes to cook. It takes a watchful eye and a fraction of the time for a pizza to cook in a wood-burning oven.

Accardi turns out Neapolitan pizzas, made with a dough that’s been patiently developed for 24 hours, rising, resting, and waiting for its ultimate transformation.

Telltale leopard-like brown spots on the crust are a signal that the pizza is ready.

When I pick up a slice, I almost let out a gasp of surprise. It feels almost light as air.

The pizzas are crispy, light, flavorful. Above, half margherita and half pancetta, clams, and lemons. (Edward Dai/Epoch Times)

Crispy, and topped with ingredients, sometimes simple and sometimes hearty, these are pizzas you don’t get sick of.

“I get a lot of expats who live in New York, who are Italian, and they come to eat here all the time. [They say:] ‘It’s like eating in Italy, it’s like eating in Naples. That’s how I know we’re doing it right,” said Accardi.

Varieties range from a simple margherita, with tomato, basil, mozzarella, and Reggiano ($14.75) to the Vendetta Sarda with wild boar sausage, wild mushrooms, mozzarella, and plum tomatoes ($16.75).

Watch for daily specials with unusual toppings. I had a delectable one: clams and pancetta, accented with thin slices of lemon that had caramelized into a deep, dry, golden citrus essence.

The wood-burning oven doesn’t only work its magic on pizza, of course.

There are different hot spots in a wood-burning oven.

“The dome is the hottest point, so if we want to sear, we’ll raise it toward the roof,” Accardi said of a branzino.

The fish emerges with beautifully caramelized, crackly skin, served with fennel. The inside is tender, moist, and flavored by herbs. The contrast is simple and soul-satisfying.

Lightness characterizes the many dishes, from fish to pizza, from an impeccably dressed Caesar salad to a smooth panna cotta with berries.

Chef de cuisine Giancarlo Dellanzo, from Florence, brings the oven’s magic to regional dishes, including meatballs made of wild boar and veal, with pine nuts and fennel, are burnished in the oven’s hot flames.

Chef and restaurateur Nicola Accardi, who hails from Sicily, is quick to point out its unique culinary heritage.

The island, which was invaded over the centuries by Arabs, Norman, Greeks, Spaniards, manifests culinary influences not found elsewhere in Italy, including pine nuts, wild fennel (smaller and more intense than its domestic cousins), anchovies, and candied fruits are prevalent.

Between Accardi and Dellanzo, the trattoria offers specialties from Sicily, Tuscany, and also Rome, where Accardi has spent much time.

The atmosphere at Tavola has a rustic quality to it, inherited from the previous occupant, Manganaro’s Grosseria Italiana. Huge wheels of cheese on the counter, bags of flour on the floor, with prosciutto, garlic, and chilies hanging from a wooden beam.

Cheese on the counter at Tavola. (Edward Dai/Epoch Times)

Accardi has run seven restaurants since he’s opened Cola in 1988, but he’s never had the room for a wood-burning oven. “I wanted my own oven,” he said. Tavola—with its double-oven—was more of a passion for him.

He didn’t give too much thought to how it would do. But it is doing very well, with a positively bustling atmosphere at night, thanks to a warm Old World vibe and that oven magic.