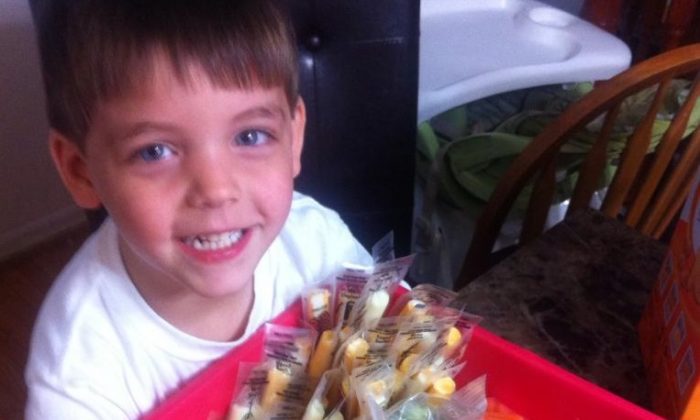 Reddit user flydream21 uploaded a photo of her son, who, on his own accord, decided to bring lunch to classmates who could not afford one.
Good to Know

This Little Kid Will Make You Smile; When You Understand Why, You Might Just Cry

“Kids can be so mean”—we’ve all heard it or said it. A Google search for “kids” + “mean” brings up a whopping 388 million results. But this deeply entrenched notion, cemented in almost anyone who went through elementary school, is sometimes disproven in the most awesome of ways. Sometimes, it’s kids’ kindness that exposes the meanness of the world we, adults, have created for them.

“My son said there’s some kids in his class that don’t eat their lunch, ” shared Reddit user flydream21 , who uploaded a photo of her son, carrying a box full of groceries to school.

“Cuz they don’t have one, mommy. Can I bring them some of mine?”  Was his startling reply.

The onslaught of  replies to this post showed this situation isn’t rare, but hearteningly common.

“I’ve been packing an extra lunch for each of my boys for about 3 years now. We can’t exactly ‘afford’ it – but I’ll be damned if I know a classmate goes hungry every day,” said StarVixen. “It started when I chaperoned a field trip and realized a classmate had a Capri-sun, a handful of cheese-its and a small pack of fruit snacks for the day. The kids have a snack period and lunch. My kids ate that practically for a snack (minus the capri-sun. They had water at snack time). Broke my heart.”

NBPTS, A teacher active on the social news site really brought it home: “What do they do when they get home? This is a serious question. I’m a teacher in America. Our free/reduced lunch kids devour breakfast and lunch because this is sometimes the only food they get.”