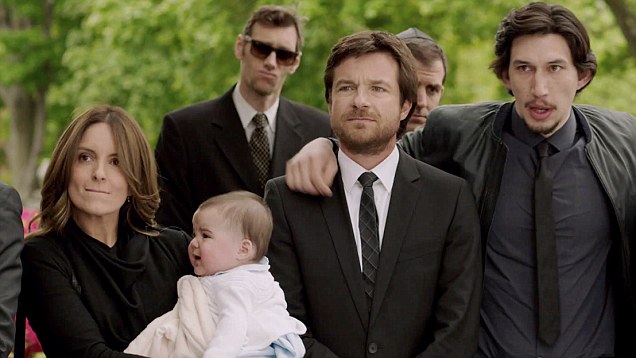 All Star Cast of This Is Where I Leave You
News

After launching a film career 54 years ago in the 1960 film Tall Story, actress and former activist Jane Fonda is still blazing the silver screen in her film This Is Where I Leave You, and looking darn good doing it.   As well, Jason Bateman is finally getting a well deserved top billing status alongside Fonda.

This Is Where I Leave You is a character-driven comedy chronicling the dysfunctional seven day gathering of a Jewish family sitting Shiva after the death of the family patriarch.  The story is centered around the character Judd Altman (Jason Bateman), a radio show producer who has recently left his wife after finding her in their bed with his boss, the popular radio show personality that he produces for. Not long after, Judd gets the news that his father has passed and he returns to the family homestead to sit Shiva at the behest of his mother who insists it was his father’s dying wish.

Sitting shiva (shiva literally meaning “seven” in Hebrew) is a mourning ritual where members of the immediate family gather for seven days at the home of deceased to receive guests.  The Altman shiva  serves as an unwelcomed opportunity for the family to come together, argue, hit on each others spouses, and come to physical blows over the future of the family business.

The family matriarch Hillary (Fonda) is a best selling novelist who has just had her breasts enlarged, but as well serves as the unifying force in the family.  Tina Fey stars as the only daughter Wendy, who has a baby and is at odds with an absentee husband.  She is also still in love with the neighborhood man she abandoned after an accident leaves him dim-witted.  In spite of her own problems she often serves as the voice of reason in the midst of chaos, and muscle in the midst of adversity.  Scene-stealer Adam Driver (The F Word)  co-stars as the floundering, unscrupulously candid, youngest child Phillip who is dating a psycho-therapist old enough to be his mother, and Corey Stoll co-stars as the more level-headed oldest sibling Paul who (much like the fictional character George Bailey from It’s A Wonderful Life) opts to helm the family business alongside his now deceased father rather than live his own dreams.

This Is Where I Leave You is adapted from the novel of the same name written by Jonathan Tropper. Tropper also pens the screenplay which indeed does sweep audiences on to an amusing ride of family dysfunction via ripe performances from an all-star cast.  Tropper’s characters are believable and empathetic.  Tina Fey as Hillary is built more upon rational balance than comedy.  You won’t find Fey here doing impressions and quick-witted one-liners.  This performance is far more human and less animated.

Bateman in the lead as Judd radiates once again as the king of sad-sack and deadpan.  Nobody portrays mortification and humiliation quite like Bateman, with the exception of  perhaps Steve Carell.  It’s a delight to see Bateman finally take top billing for a major release the likes of This Is Where I Leave You.  From a child actor on the hit tv sitcom Silver Spoons, to his teen and  heartthrob young adult years on the tv show The Hogans, it almost seemed as if Bateman’s career had failed until the early 2000’s when he rose out of the ashes of near obscurity to slowly garner roles in television and independent film releases.   He has been on a very slow but steady track to this current leading role and it’s been a pleasure watching his star rise. Nobody does mortification or straight-man amidst a sea of idiots better than Bateman.

The soon-to-be very much in demand Adam Driver is an absolute stand-out in this film.  A dynamo that the  camera adores. Animated, and oozing with an odd kind of sex appeal, Driver possesses an energy that takes over the screen and mutes anyone or any thing else he’s sharing the screen with.  It’s the kind of cinematic charisma that can’t be ignored and is certain to soon-enough land in him in the annals of Hollywood’s most in-demand leading men.  Driver was last seen in Canadian indie The F Word (title also known in the United States as What If) where he as well stole every scene he graced.

Jane Fonda’s role as the matriarch Hillary works in as much that Fonda is unable to deliver a bad performance in any role.  The role however is cliche’d and nothing to write home about.  That being said, the fact that Fonda is… well.. Fonda – makes it worth a watch.  Fonda has paid her dues and earned the right of Hollywood royalty. The daughter of legendary actor Henry Fonda, her own body of work speaks for itself, allowing her sit back and portray Humpty-Dumpty and still garner respect from her peers if she wanted to.  It took Fonda quite a while to decide to go under the knife.  She embraced her naturally aging face for quite a long time (and was still looking great in spite of the wrinkles) until a mere few years ago when she asserted that she had looked at her face in the mirror and was simply tired of seeing a face that didn’t match her vibrancy.  So she finally went under the plastic surgeons knife and looks utterly refreshed.  Any more facial work could prove to be disastrous.  Right now Fonda looks like Fonda and that could end if she decides to take it any further.  In summary, it’s just a delight to see this legend alive and kicking and still working her magic on the silver screen.

Not to go unmentioned is a favorite from the hit tv show Parenthood.  Dax Shepard co-stars as Wade, the obnoxious radio personality who sleeps with Judd’s wife.  Dax as Wade delivers a thunderous performance.  Shepard is always a pleasure to watch.  One of the best performers in the industry.

Directed by Shawn Levy (the hilarious Date Night, and Night At The Museum), This Is Where I Leave isn’t anywhere near his first go round at the rodeo and it shows. Levy’s approach to comedy is less is more.  Straight faces are ultimately funnier than goofy faces and Levy seems to know this while other filmmakers have yet to grasp the concept.  A pattern reminiscent of Robert Altman films, and it works.

This Is Where I Leave You runs as a four star production until a rather contrived ending rears its ugly head.  While this may have indeed been the ending of the book as well,  the fictional Altman family may have been forced to embrace the films final revelation, but that doesn’t mean the audience will.  The finale is cheap and not nearly as convincing as the other scenarios within the story line.  Some audience members may leave feeling cheated.  That being said, the overall production was rich with ripe performances by today’s most sought-after actors, and this makes it well worth the watch.

This Is Where I Leave You runs for 103 minutes, and is rated R for nudity, adult themes and overt sexuality.

Three and a half stars.