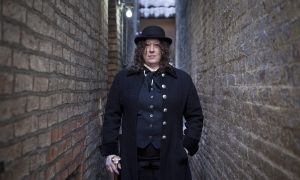 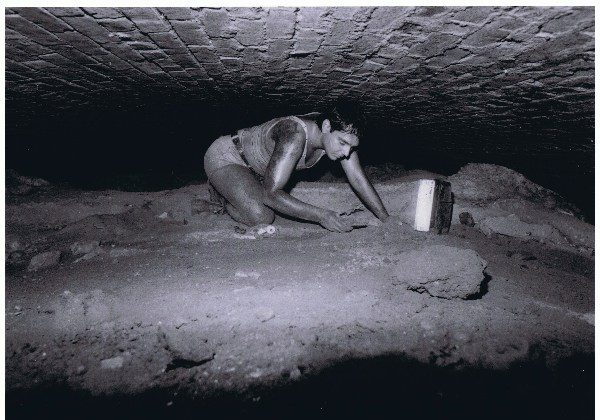 Robert Diamond rediscovering the tunnel entrance circa 1980. He gained entry into the tunnel's main chamber in 1981. (Courtesy of BHRA)
New York

This Is New York: Robert Diamond, On Finding the Lost Atlantic Avenue Tunnel

NEW YORK— Robert Diamond was surprised to smell an earthy, forest-like scent as he climbed down the manhole on Court Street and Atlantic Avenue. He flicked the flashlight on and walked into the darkness, stopping before a concrete wall covered in dirt. The city gas company authorities had told him that this wall was evidence that there was nothing down there, that they had opened the manhole for nothing, and that the Atlantic Avenue Tunnel was merely an urban legend. Diamond said he had to at least go down and see for himself.

He got a call on the radio that told him to come back up. The gas crew was leaving, and they needed to close the manhole.

Against all odds, the first spot that his hand touched was a small opening filled with rocks. It was a moment that he and his friends would later look back on and find incredibly strange and remarkable. If he hadn’t found that small spot at that moment, the world’s oldest subway tunnel may have remained lost in history.

The voices came on the radio again and beseeched Diamond to come up. Diamond tried to search for the words, but all he could muster was a laugh. The gas crew sensed he had found something and came down to help him. When they push over the rocks, a rush of cold air blew into their faces.

Inside, they found a relic kept intact since its last usage in 1861. The arched, brick ceiling was 17 feet high and its walls were decked intricately by stones. The tunnel was half a mile long, located between Brooklyn Heights and Cobble Hill. It held two railroad tracks.

For seven months, Diamond had searched for the entrance to this historic tunnel built by the Long Island Rail Road in 1844 to link New York to Boston. Diamond was 19 when he rediscovered it in 1980, after a year of working on getting approval to open the main tunnel.

In 2011, the Guinness Book of World Records recorded the tunnel as the oldest subway tunnel in the world.

He found the tunnel despite doubts from experts such as the president of the New York Transit Museum and city engineers, who said it did not exist.

At 54, Diamond, also known as “Tunnel Bob,” is a heavy man with a receding hairline. His disheveled, thin tufts of hair make him look like an idler. His critics say he is a conspiracy theorist. His friends say he is a misunderstood genius.

“He’s an urban archeologist, a theoretician, a person with tremendous intellect, and he has a willful stick-to-it-ness,” said Greg Castillo, president of the Brooklyn Historic Railway Association. “He has an indestructible spirit.”

Castillo, an epic poetry writer with arms replete with tattoos, has known Diamond since high school.

In high school, Diamond was an engineering enthusiast who won the national science fair competition for building a working scale model of a satellite solar power station that converted sunlight into electricity. He was 17, and he devised it at his kitchen table.

Diamond attended Pratt Institute, where he was offered a special scholarship and job to do engineering work for Kodak in Rochester. But then the special scholarship devalued his other scholarships so Diamond could no longer afford school, and the job turned out to be unpaid. So Diamond never finished school.

That left him in low spirits. He was looking for a distraction when he came across a docudrama on a conspiracy theory about John Wilkes Booth, the man who assassinated Lincoln. The theory reasons that Booth was not actually shot and killed by Union soldiers, that he escaped to London, and that before he escaped to London, he stopped in Brooklyn.

Most important, Booth supposedly hid 17 pages of his diary inside the Atlantic Avenue Tunnel, next to a wood burning steam locomotive. This compelled Diamond to look for the locomotive, not because he believed the theory, but because it would be intriguing to find the locomotive and the tunnel if it existed. So the search began.

Diamond spent months in public libraries reading nearly every 19th century news article ever written about the tunnel, which mostly consisted of stories about murderers, pirates, and ghosts.

“There was a mad man who worked there for a while, did the Jack the Ripper kind of thing, and there were river pirates called the Smokey Hallow Gang who hid their treasures in the tunnel,” he said.

“Bob is very charismatic with the stories,” Castillo interjected.

Diamond finally located the tunnel by finding a map in a dusty trunk on a shelf in the Brooklyn Borough president’s topographical office. A tiny blue dot on the map marked the manhole cover.

Shortly after finding the tunnel, Diamond formed the nonprofit Brooklyn Historic Railway Association (BHRA). The association got the tunnel registered as a protected historic site in 1989.

The BHRA began building railway tracks in Brooklyn, hoping to bring the trolley cars back. The idea was to build it along the waterfront, and between housing projects to give the poorer Red Hook residents more accessible transportation to jobs. Diamond spent $1.5 million on the tracks. In 2003, the DOT removed all trolley tracks from Brooklyn streets and said it was not an economically sensible project.

The night when the tracks were torn away, Diamond stood by and cried on the street. Only a short section of the trollies remains behind the Fairway near the Beard Street Pier. Diamond sued the city for $160 million in 2011. The case is currently sitting in the appellate court.

He spends his afternoons at coffee shops writing reports advocating for the return of tunnel tours and trolleys. Diamond believes he could spend less to make a more efficient transportation than buses and subways. Streetcars could play a large role in energy conservation and drive up development in Red Hook. His website is filled with studies of the economic effect of streetcars in other cities.

He carries around a purple cane. If he walks more than a block, he experiences a sharp pain in his right leg. It’s a problem caused by his weight, he said. Perhaps he will have more incentive to lose weight if the tours start again.

He recently completed a 446-page report proposing safety regulations that could help the tours restart, and details on how to construct trolley tracks. There is a Kickstarter campaign raising money for the report’s printing costs.  It remains to be seen whether anything will come of it, but Diamond maintains his hope and determination by thinking of his work as a service for others.

“I did the tunnel tours because it’s something that other people enjoy,” he said. “My philosophy on life is to find something useful that benefits society in some way.”