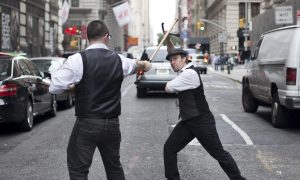 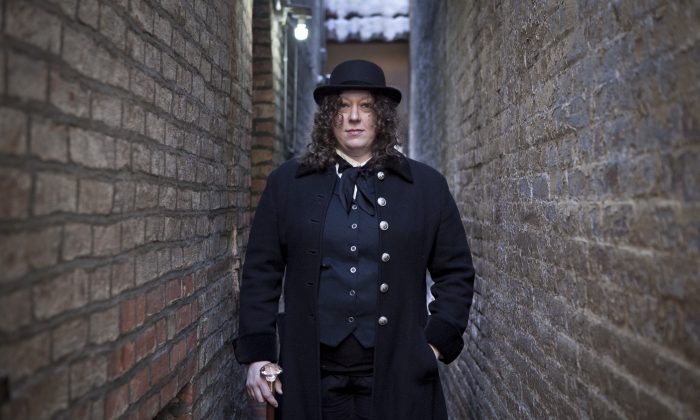 Rachel Klingberg, founder of the Bartitsu Club of New York City and associate director of online communications at Pace University, in the entrance of her home near Washington Square Park on Jan. 22, 2014. (Samira Bouaou/Epoch Times)
New York

This Is New York: Rachel Klingberg on Conquering Timidity

NEW YORK—It’s as if Rachel Klingberg fell into this world from another time.

Everything about her—from her gait and her style, to the building that she lives in, seems to radiate an aura of regal antiquity.

She lives in a pastel yellow building with Spanish tiles, one that stands salient on a street of brownstones and New-Age restaurants just steps away from Washington Square Park.

The midafternoon sunlight seeps through the gates of a brick alley that leads to her apartment; there, Klingberg stands in a Victorian overcoat embellished with silver buttons that she painstakingly swapped from plastic ones.

Klingberg, 42, is a Web developer at Pace University. But when she’s not working, she goes to gatherings with the New York Nineteenth Century Society, and sometimes she teaches at the Bartitsu Club of New York City.

Bartitsu is the Victorian art of self-defense, where ladies use parasols and gentlemen use walking sticks to outwit and parry attackers.

Klingberg founded the New York branch of the club in 2011, with a wish to further revive the practice of a lost art of combat.

Klingberg has a gentle demeanor and teaches with a maternal-like care, but she possesses vast knowledge of military history, martial arts, and historical costuming.

The Bartitsu coterie in New York is a medley crew of martial artists, Sherlock Holmes fans, and inquisitive people, who see Klingberg as the cusp of where history can exist in modernity.

She is a leader who is not afraid to delve into her interests, even if her interest is something as obscure as a 19th century method of self-defense.

But few know that Klingberg had to overcome many years of lonesome timidity to become the warm, audacious person she is today.

Klingberg grew up in Huntington, Long Island in the ’70s. Her family lived in a Black and Italian neighborhood, where people avoided walking outdoors after hours. But the town was nonetheless a scenic place in its own way.

It was a Revolutionary War town. Prior to the war, it had been farmland. Remnants of a lumber mill and a cornfield remained down the street from her house.

It was a town where milkmen still delivered milk to people’s doorsteps, where old ideas remained strong.

They were a poor family, but they felt that they had enough.

“Being poor was not that bad, all it meant was that you didn’t get to have everything that you wanted,” Klingberg said.

In the dead of winter, they depended on a meek kerosene heater for survival. But at least they never starved.

Klingberg’s stepfather, Peter Karoly, was a fishermen and a gardener.

She described him as a “Teddy Roosevelt kind of man,” a man of nature. He taught Klingberg and her brother how to make whistles out of willow twigs.

He never had the heart to shoot a deer. But he would carry a bow and arrow into the woods anyway, to saunter and seep in that timeless feeling of manliness.

He supported the family with his modest piano tuning business. But they were not technically his family.

He saw them as his children, and they too saw him as their father, but he and Klingberg’s mother never officially married. People in town talked. Children were told not to play with them.

“If you were poor in ’70s, it meant you had a moral failing,” Klingberg recalled.

Klingberg’s biological father had left them when they were infants. His name was John Klingberg. He was a musician.

Although he ended up playing bass for the Irish legend Van Morrison, he had very little money throughout his life.

Their mother had always planned for her children to meet their father one day, but the knell rang sooner than expected. John Klingberg passed away at a young age.

Sometimes, Klingberg would listen for the bass in Morrison’s songs and wonder what it would have been like to meet her father.

But in many ways, she didn’t need to meet him. Karoly was a good father figure in her life.

He was the strict, “solemn,” parent. “At least one parent needed to be,” Klingberg joked.

Her mother was the parent who fostered creativity, whose motto was to let children be children.

As a little girl, Klingberg liked to wear costumes everywhere. She would wear cat, leopard, and ballerina costumes to school and family gatherings.

Teachers would call home and complain to her mother that it was strange. But her mother didn’t care. Children should be allowed to wear costumes if they wanted to. There is no other time in their lives that they can do it.

Her stepfather would try to ban costumes from family gatherings, telling her she was not allowed to “wear those cat ears.” So Klingberg went upstairs and changed into another set of cat ears.

Although Klingberg dressed with panache, she was a shy child who did not have any friends throughout elementary school. She spent most of her childhood in nature, or in barns with animals.

One year, her grandparents paid for a summer camp where she learned how to ride a horse. She became enthralled by steeds.

“There is something noble about riding a horse,” Klingberg said.

Growing up, she worked at a stable on the West Hills of Long Island, on the estate where Walt Whitman was born.

Besides serving as a historic literary site, the stable, like many other stables, was also a place were people abandoned their horses.

There was a woman who did not know what to do with a horse that belonged to her deceased father. She wanted to keep it for sentimental reasons, but she did not really have the means to keep it. So she left it at the stable and stopped paying for services.

Klingberg, who had been taking care of that horse, continued to look after it pro bono for the last six months of her senior year in high school.

She planned on going to the Westchester branch of Pace University, where she could study equestrian care.

She wanted to be a professional groom, or perhaps she would become a farrier— someone who specialized in equine hoof care. At the time, there was a growing development of specialized horseshoes that would save lame horses from euthanasia. It was an interesting time to get into horsemanship.

But at the very last moment, Klingberg decided that she wanted to go to the city.

Her house was very close to the train station, and she had fond memories of visiting New York City on weekends for anti-nuke protests, Native-American costume shopping; and once, she even tried going to a Rainbow Gathering.

So she decided to study English at the New York City branch of Pace University. Afterward she received her master’s degree in English at New York University. Then she spent some years writing corporate newsletters, until her mother pointed out a simple fact about Klingberg.

Her mother, Robin Jatko, is a very bright woman. It may be the German ancestry, Klingberg said, but she knew how to fix everything, from washing machines to cars.

And she would do it in the most creative of ways. Once when Klingberg had a hole in her stocking, her mother would color the skin that was showing with a black marker.

Her mother saw in Klingberg that her strength was logic. Sometimes she was even too logical. But there is no such thing as being too logical for computer programming.

So her mother convinced her to learn HTML. The idea seemed strange at first. Klingberg had not grown up with computers, and she envisioned them to be something like the “Star Trek” replicator.

But after taking a six-week course on HTML, her teacher hired her. Klingberg hasn’t been without a job since, and now she even has another master’s in computer science.

Klingberg was always interested in martial arts, but it wasn’t until 2002 that she took her first class. And it was a class that changed her life.

“Nobody would look at me and say that person looks like a martial artist,” she said. “I was very shy and hesitant.”

But she finally decided to try it when she read an article from the Village Voice about a Russian martial arts class.

It turned out, the class was taught by a videographer from Latvia. He came to the country in the early ’90s not knowing English. As the story goes, he walked into a martial arts class and said, “I don’t know very much English, but I want to learn martial arts.”

He became very good at English and martial arts, good enough to found his own school in New York.

If a Latvian videographer can create his own martial arts business in the United States, was shyness truly a substantial barrier to stop Klingberg from learning martial arts?

So Klingberg decided to get out of her comfort zone. She met new people in the classes. Eventually, she met enough people from her martial arts classes who were interested in learning Bartitsu.

And that is the back story of the woman who revitalized a lost method of 19th century self-defense in New York City.

“Nobody gets to where they want to go by letting the winds of fortune toss them around,” she said. “If I strive for anything, I have to put the work into it.”

This Is New York is a weekly column that features profiles of inspiring individuals in New York City, from all walks of life. Read a new profile every Saturday afternoon online, and every Friday in print. See all our TiNYs here: epochtim.es/TINY