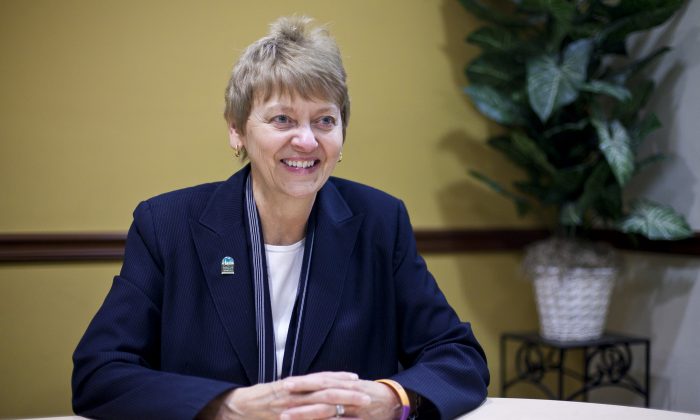 NEW YORK—Nancy Ploeger recalled crying on the street as she watched the Korean deli shop owner on her corner move out due to a drastic rent increase.

“It was like a death in the family when they moved out,” she said. Ploeger had come to view the Korean woman as family over the previous 20 years—watching her daughter grow up from a baby; and leaving her key at the deli for her houseguests to pick up.

Although Ploeger is the current president of the Manhattan Chamber of Commerce (MCC), she always felt it was less about the economics and more about the interaction of people.

Ploeger came to the MCC as executive director in 1994. Since then, she has launched extensive economic growth initiatives and advocacy work for the city’s business community—particularly small businesses—such as improving health insurance policies, globalization, and diversifying business resources.

Yet Ploeger graduated from Monmouth College in 1971 with a degree in psychology, not business.

“That’s a lot of what it is anyway,” she said. “Life is all about working with people.”

Ploeger’s empathy and keen understanding of the interiority of people came as a result of her unconventional childhood, she said.

She was born in St. Louis, Mo., but only lived there for five years.

Her father was a marketing director for Sears. Whenever a branch needed to strengthen its marketing, he was the man for the job. But it also involved moving his whole family.

At the time, there was no Facebook. Each move meant the permanent loss of at least one good friend. It was a difficult childhood, yet Ploeger doesn’t know if she would have wanted to live it any other way, for it was these painful experiences that taught her to appreciate and accept different kinds of people.

“I think it was that kind of an upbringing that really helped me understand … how to live with them and celebrate the best parts of them,” she said.

As a teenager, she moved from college-town Boston, Mass., to the middle of farm country in Hagerstown, Md. It was a cultural shock to move from one to the other, albeit both cities share the East Coast.

But Ploeger learned to enjoy the difference rather than resent it.

“It made me appreciate that kind of environment. … It was very much a community taking care of each other,” she said. “With horses and cows all around, and seeing how hard farming was. I began to understand how hard a life that is, and what it took to grow our foods.”

“That really helped me develop my own personality and my own interest,” she said.

“He always dragged me along. … He got me involved in a lot of his marketing schemes […] because small businesses are very much a part of the community,” she recalled.

In terms of marketing schemes, Ploeger had done it all—from dropping advertising ping pong balls out of a helicopter at the parking lot of a mall, to giving out cherry pies while dressed as Martha Washington.

When Ploeger graduated from college, she and a few girlfriends undertook a three-month road trip across the country.

“We traveled all over trying to decide where we wanted to live, “she said. “We were footloose and fancy free.”

They traveled to the cities they had heard about but had never visited—Denver, Seattle, Portland, and all around the coast of California.

“But as we were driving over the George Washington Bridge, we looked at New York City and said, ‘This is it.’ No other place is as exciting as New York City,” she recalled.

With that, Ploeger moved to the city. She started off working in human resources in Macy’s, but quickly moved up with the help of a female boss who mentored and trained her to do executive searches. Ploeger traveled across the country interviewing people for the corporation’s major divisions.

“After having worked for one major corporation and one small business that’s grown, I came to the chamber [of commerce] because the chamber leadership did believe that if we are going to have a successful business community, we have to be engaged in the whole community,” she said.

One of Ploeger’s favorite words comes from the South African philosophy, Ubuntu, which roughly translates to “I am because we are.”

“That’s one word that I have really come to love, and I think that’s really what it’s all about,” she said.

“We’re all in this together. It doesn’t matter what your background is. And that’s what’s so exciting about New York,” she said. “When you think of the diversity we have in the city—from the different religions, cultures, and how we all adapt. New Yorkers get that.”