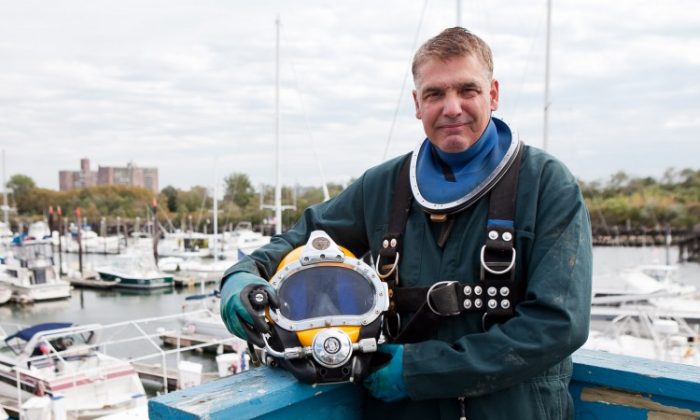 This Is New York: Gene Ritter

NEW YORK— At 80 feet below the Atlantic ocean, diver Gene Ritter realized he was running out of air. He didn’t panic, knowing he had his emergency tank. But as he was trying to get out of the Lizzie D shipwreck, it got stuck.

He carefully took the emergency tank off and dislodged it from the wreck. When he put it back on, he realized it was empty.

“If I panicked, I would have died,” Ritter said.

He made it to 40 feet until his main tank was depleted; there was no backup and he had to make some tough decisions.

Despite the unpopularity of this emergency breathing method, Ritter did a free ascent—exhaling before making a quick ascent for the surface.

With essentially one breath of air, Ritter swam the remaining 40 feet and flung himself onto the boat. Quickly recovering, he told the captain about the artifacts he retrieved, conveniently forgetting to mention his near-death experience.

“I didn’t want them to think I was an idiot and never hire me again,” Ritter joked. It was 1985, and Ritter was 24 years old. To this day, he can still remember the precise details. It was a wake-up call.

“I had to sit down and re-evaluate myself,” he said. “This ego thing almost got me killed.”

The following week, a diver friend of his drowned while exploring the same ship.

Ritter believes the sea has a spiritual law of its own. “I dive into many shipwrecks. I’m not superstitious, but I respect the unknown,” he said. “You’re not there to take, but to give back to society.”

Ritter, now 53, attributes his success as a diver to this ideology. In 1987, he founded Cultural Research Divers, a group of divers and environmental researchers who bring interactive educational programs to schools and other learning venues. The group has brought thousands of historic artifacts to schools and community events in New York.

“I wouldn’t do it if the children weren’t so excited about it,” he said. The program consists of Ritter wearing a large old-fashioned scuba diving mask and presenting his artifacts under theatrical lights.

The children also watch a live video feed from an underwater exhibition and can have a say in which direction the diver swims.

His program aims to spark a tangible connection with history, like the connection Ritter made when he found a bottle from 1861 underneath the Verrazano-Narrows Bridge.

“It’s impossible to remember dates without a context,” he said. “What does 1861 mean? Looked it up: the Civil War.

“The Civil War now comes to me personally in my hand while I hold this bottle because the guy who had it before me was from the Civil War,” he said. “That is what we give to the kids, I tell them they are now a part of that history.”

Another principle that Ritter emphasizes in his performances is compassion. He believes that only by having compassion at a young age for small creatures, can children grow up to have empathy for human beings. World peace begins with children. “The key is to put compassion back into kids. We as a society really should start learning,” he said.

Ritter also organized a pilot program from 2003–2008. He integrated math into his show to help struggling students. He is currently working on getting the funds to turn it into a long-term program.

Although Ritter has dug up thousands of artifacts throughout the years, his most memorable one is the discovery of the Dreamland Piers, two giant Coney Island piers that were demolished during a fire in 1911. The piers held a Dreamland amusement park that plummeted into the sea during the fire.

He was inspired to find those lost piers in 1989, when he came across the two images in a book. “I lived here all my life, and I never knew they existed,” he said.

It took years of researching, mapping, and many hits and misses to find the piers’ exact location. After all, modern streets no longer matched those from 100 years ago. Ritter believes his focus on giving back to the community helped him discover the long-lost Dreamland Piers of Coney Island.

“I heard a harp go off in my head when I saw all those artifacts,” he said. The uncovering of the piers, however, meant more than a bevy of lost treasures. It changed the infrastructure of New York City.

It is difficult to get permits to extend ferry services to Coney Island. The discovery of the Dreamland Piers essentially cut the red tape. It is much easier to get a permit to “rebuild” on something that pre-existed before the parks department owned the area.

Ritter feels that his discoveries led to the revitalization of Coney Island. “When a neighborhood discovers historical artifacts, the neighborhood as a whole is worth more,” he said.

Ritter also recently discovered a wide range of military vessels and ships at Coney Island Creek that could be from the World War II era.

He also found 1,500 munitions that were lost during a 1954 military accident near the Verrazano-Narrows Bridge.

Ritter came across his very first artifact through a rather painful happenstance in 1987. During one of his dives in Coney Island, just 20 feet under, his head smashed against a metal object. Despite the whirl of pain and a tumultuous headache, River grabbed the three-foot-long piece of metal and hauled it to the shore.

It turned out to be an anti-aircraft shell from World War I.

For the next four years, Ritter continued to collect artifacts until he approached the U.S. Army Corps of Engineers with his finds. “They told me, well, Mr. Ritter, what you are doing is completely illegal,” he said.

The artifacts were found on government-owned land and hence cannot be treated as private property.

But Ritter was not interested in selling the artifacts. “I’d rather keep it intact,” he said. That’s when Ritter founded Cultural Research Divers, curating his discoveries for public display.

He taught himself the discipline of archeology, the laws that surround it, and learned to look at the artifacts from a historical rather than a monetary standpoint.

Ritter’s purpose of collecting artifacts is not for money, but to rediscover history. He discovers artifacts in order to make history tangible for young people and to create a perpetual learning experience for generations to come.

“If you could reach a couple of kids … if you can change the life of a few of them … that for me really is something,” Ritter said.