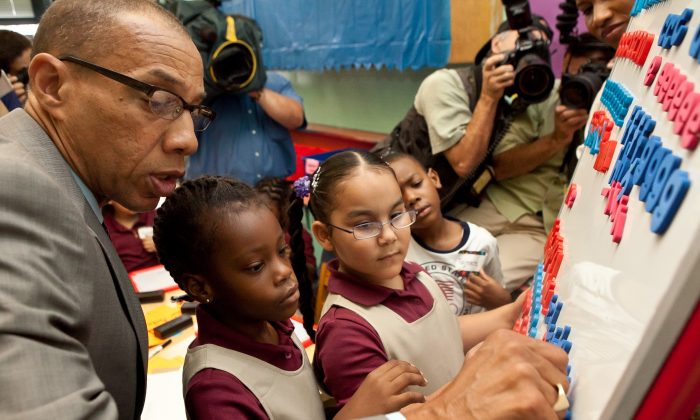 Schools Chancellor Dennis Walcott with first-grade children from the Young Scholar’s Academy for Discovery and Exploration school on the first day of school in Brooklyn on Sept. 6, 2012. (Amal Chen/The Epoch Times)
New York

This is New York: Dennis Walcott, Overcoming Adversity and Drawing Strength From It

NEW YORK—The most painful events can sometimes become the sustaining force for a person’s life passion.

Dennis Walcott’s father passed away when Walcott was 20—from an accumulation of illnesses believed to have developed during his career as an exterminator.

Nine months later, his mother died from a heart attack.

It was a month shy of Walcott’s college graduation. He was an only child.

Walcott, 61, says the difficulty of the loss of his parents during such a short time frame is still incomparable to anything else in his life.

“I buried my mother, and then I had to go back to school to finals,” he said. “So that’s why none of this [current work] stuff bothers me.”

“I learned not to complain and enjoy life,” he said. “I learned to own my purpose and know what your purpose is about.”

As the chancellor of the New York City Department of Education, Walcott oversees more than 1,700 schools and 1.1 million students. Amid the challenges of dealing with school bus strikes, teacher evaluations, and political chastisements, Walcott knows how to remain calm and keep things in perspective.

“I try to maximize opportunities and not get high or low emotionally based on what’s happening,” he said. “I want to focus on why we’re here, which is to focus on our students.”

For Walcott, one of the most important traits a person needs is resilience. “That is so important in life,” he said.

He attended high school during the concluding years of racial integration in New York.

It was an enriching environment, although it came at a cost, he said.

Two school strikes occurred during Walcott’s school years in the 1960s, a period of Vietnam War protests, and the assassinations of John F. Kennedy, Robert F. Kennedy, and Malcolm X.

“We had a lot of fury in the country that got enmeshed into the school environment as well,” Walcott said.

Racial tensions heightened during the two-month New York City teachers’ strike in 1968, a months long confrontation between the new community-controlled school board in the Brownsville section of Brooklyn, and the New York City’s United Federation of Teachers.

“That was further exacerbated by the number of students who came from predominantly black areas to a predominantly white area,” Walcott said. “While it didn’t manifest themselves in any actions, there were a lot of raw nerves and feeling around that.”

Despite such chaotic events, Walcott treasured his education and the learning opportunities that arose from them.

“The tension between teachers and community—how those issues played out—it left a lasting imprint as far as teachers feeling so strongly about an issue that they struck,” he said.

“It impacted the education of students; having to reconcile that was what a lot of us had to do.”

Walcott graduated from Francis Lewis High School, and received his Bachelor and Master of Education from the University of Bridgeport in Connecticut in 1973 and 1974 respectively. In 1980, he received his Master of Social Work from Fordham University in New York.

It Takes a Village

Walcott grew up in an area populated largely by African-Americans from Harlem and Brooklyn who migrated to southern Queens in order to purchase homes.

“There was a big support network of families with each other as far as the children were concerned,” he said.

Growing up, Walcott’s favorite subject in school was history. His least favorite was math. “There were a series of worst subjects, but math was a constant throughout,” he joked.

Walcott lived two doors down from a teacher who often offered to tutor him.

“We were not rich at all, but [the community] provided a very supportive environment to enrich my life,” he said. “There were support services making sure I had tutoring in areas I was weak in.”

Walcott recalled that although his neighbor had an infirmity with her hands, she still often went out of her way to teach the children around her.

“I just remembered her dedication. She died fairly young … her fingers were not fully functional, but she never allowed that to interfere with her being a teacher,” he said. “She was a teacher until she died.”

After completing his post secondary schooling, Walcott returned to Queens to work and teach. “Having to benefit the community was important,” he said.

Walcott began his career in education as a kindergarten teacher at a child care center in Queens, where he realized many children lacked a male role model in their lives.

In 1975, he founded the Frederick Douglass Brother-to-Brother program, a mentoring program for young boys.

As the city’s Department of Education endeavors to resolve serious issues, Walcott finds inspiration from his students.

“Every time I go into a school is a poignant moment,” Walcott said. “One of the traits that intrigues me about students is their ability to be resilient.”

One student told his small school community how they’re really his family, because his family threw him out when he was 12 years-old,” he said.

“I don’t think I am anything more than what I am, what I was raised to be,” he said. “I feed off of those who are resilient, who have challenges, and are able to surmount them to do what they need to do,” he said.