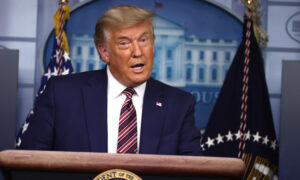 President Trump, Explain to the American People That Survival of the Republic Is at Stake
0
Share Now
TelegramFacebookTweetEmailTellMeWeReddit
Copy Link 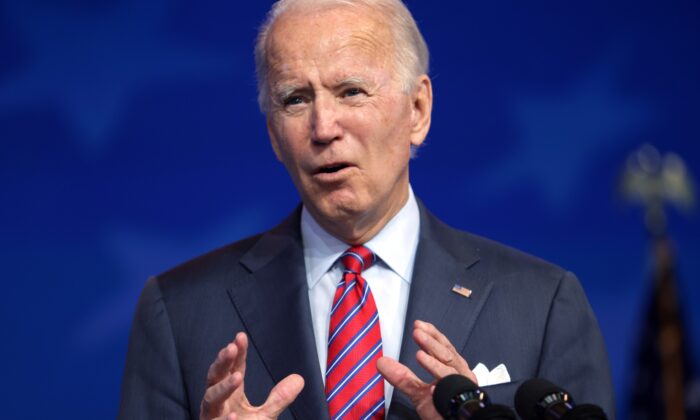 Let’s start with this inconvenient and overriding truth about the 2020 election: there is no such thing as a Joe Biden fan. Nobody actually likes Joe Biden, nobody admires him, nobody looks up to him. He’s no one’s idea of role model or an aspiration.

Throughout his nearly 50-year career as a Washington hack politician—a nobody from a state that most Americans can’t find on a map, a lifelong, superannuated swamp dweller who has enriched himself and his family through “public service” and contributed nothing to the commonweal—Biden, 78, has “run” for president on a couple of occasions, only to discover that nobody cared.

His lies about his academic record—he didn’t win a full scholarship to Syracuse law school and didn’t graduate in the top half of his class—were easily exposed, and his speechifying pilferage from other politicians, such as both Jack and Bobby Kennedy and Britain’s Neil Kinnock, made him a laughingstock, even among reporters otherwise favorably disposed toward his brand of big-government Democrat politics.

And yet here he is, the self-proclaimed “president-elect” of the United States, a doddering senescent braggart, serial liar, plagiarist, and handsy hair-sniffer, who is even now assembling a fantasy cabinet chosen strictly along the progressive lines of race, sex, and class. If the count is to be believed, Biden somehow received more votes for president (80 million) than anyone in history, even more than the media-canonized Barack Hussein Obama, whose yes-man and water boy Biden was for eight years.

Nobody attended his few rallies. His notable absence from the hustings gave a new meaning to a “front porch” campaign for the highest office in the land, this one conducted furtively from his Delaware basement. He was often masked—his obeisance to the Dreaded Covid—and almost always accompanied protectively by his wife, “Dr.” Jill Biden, a former teacher at the open-admissions Delaware Technical and Community College, who holds a doctorate in the least demanding academic “discipline” there is, education.

His running mate, Kamala Harris is, if anything, even less popular than Biden. As I wrote in April of 2017, just as America was beginning to get a good look at her: “Imagine a combination of Hillary Clinton and Barack Obama, and you’ve got Kamala Harris, the current seat-warming senator from California who, like Obama, is using the World’s Greatest Deliberative Body as a resume-puncher before swiftly moving on to bigger things: the 2020 Democrat presidential nomination… She combines Obama’s race with Hillary’s sex, and as identity politics goes these days, that’s going to be tough to beat.”

The repellant, transparently phony Harris crashed and burned during the rigged anybody-but-Bernie primaries, but the “progressive” Democrats never fell out of love with her. Instead, they contrived to clear the decks for Biden by persuading Amy Klobuchar and Pete Buttigieg to drop out just before Super Tuesday. “We do not in our party want to just eke by a victory. We want to win big,” said Klobuchar.

And “win big” they did. Unfortunately their “big win” remains almost entirely implausible given the facts above. True, Donald Trump is the most polarizing president in modern memory. (Lincoln was even more polarizing, and the Democrats reacted to him by firing on Fort Sumter, fighting a bloody four-year war, and finally assassinating him.) But in defiance of the old political adage that you can’t beat something—Trump’s wildly enthusiastic popular following—with nothing (Biden/Harris), it’s Dr. Jill Biden who’s now measuring the drapes in the Oval Office—at least until Harris takes over.

And she will. Biden has admitted it himself: “Our philosophy of government is sympatico on how we want to approach these issues that we’re facing,” he replied when asked how he and Harris got along politically. “Like I told Barack: if I reach something where there’s a fundamental disagreement that we have based on a moral principle, I’ll develop some disease and say I have to resign.”

Hardy, har-har. This “joke”—for so it was immediately dubbed by the sycophantic media—was almost as revelatory as an earlier unforced, pre-election Kinsley gaffe (“a mistake whereby a politician inadvertently says something truthful which they had not meant to reveal”), in which he confidently declared: “We have put together, I think, the most extensive and inclusive voter fraud organization in the history of American politics.”

Coming from the inheritor of the Tammany Hall tradition of election-stealing, that was saying something. Maybe, in his sunset, sundowner years, the provably duplicitous Biden finally actually means what he says.

Forget all the hugger-mugger about Krakens, Dominion voting machines, the twin Georgia runoffs for control of the Senate, et al. The only thing that matters is this: does Election 2020 pass the smell test? And the answer is no.

Sherlock Holmes would have made short work of this problem. “When you have eliminated the impossible,” observed the great detective in several of his adventures, “whatever remains, however improbable, must be the truth.” History alone tells us the chances of a non-entity like Joe Biden being elected president are impossible absent a deus ex machina or simple skullduggery.

So let us don our Holmesian deerstalker, light our meerschaum pipe, and consider: In nearly each of the critical swing states, returns showing Trump with a clear lead were suddenly halted in the dead of night, only to resume just before dawn with Biden in the lead. When I went to sleep around 2:30 a.m. on Election Night, Trump was ahead in most of the swing states. When I woke up four hours later to write this column, he was behind.

For that you can thank the media, which “won” this election for Biden by sheer fiat. Fox News called the swing state of Arizona—thanks, refugees from California!—for Biden almost before the first real Arizonans settled down for dinner. The slam-dunk state of Alaska wasn’t “officially” called for Trump until long after it mattered. About Pennsylvania—the most corrupt state in the nation, where ballots magically appear just as they are needed to help Democrats—enough said.

The media timed the announcement of the projected winner in each state with an eye to the Narrative, which was that the nation was soundly rejecting the policies of the most effective president of the modern era in favor of a supernumerary in a muzzle.

The writer Evan Thomas once Kinsleyed that media support for the Democrat candidate was worth 15 points at the polls. This year, it was more like 30. If this “election” has taught us anything, it’s that the American electoral system is irretrievably broken. Decades of Democrat fetishization of the franchise—they’ve turned it into a civil-rights issue, based on 150 years of their own resistance to Reconstruction, starting with the election of 1876—has come to this: with early voting, motor voting , “absentee” voting, late voting, “cured” voting, “harvested” voting… we no longer have voting voting.

As it happens, there is no Constitutional right for citizens to vote for president. That privilege was originally reserved for members of the state legislatures under our republican form of government, which is why the overall “popular vote” is legally meaningless. If the legislatures in the swing states choose to send a Republican, pro-Trump slate of electoral votes Washington’s way—or not send any electors at all—there is nothing either the media or the Democrats can do about it.

And should that happen, and neither candidate get to the magic number of 270 electoral votes, the race would get tossed into the House of Representatives, where each state gets one vote—and Donald Trump would be re-elected president. Now wouldn’t that be a fitting end to 2020? And a fitting end to Joe Biden’s chimerical political career.

Michael Walsh is the editor of The-Pipeline.org and the author of “The Devil’s Pleasure Palace” and “The Fiery Angel,” both published by Encounter Books. His latest book, “Last Stands,” a cultural study of military history from the Greeks to the Korean War, is out this week.