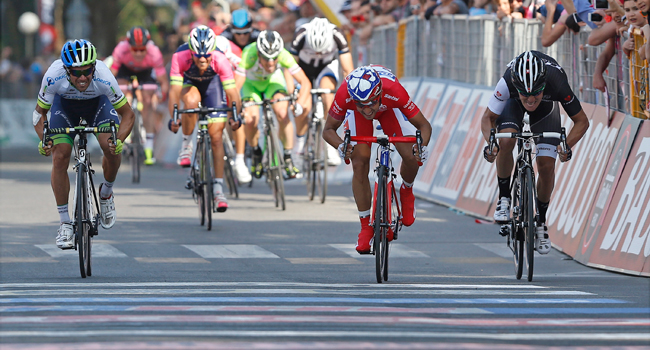 After a rest day Monday, the Giro d’Italia returned to action with a short sprint stage, and for the third time in this year’s Giro, FDJ’s Nacer Bouhanni was first across the line.

Stage Ten was almost entirely flat, with a small kick-up starting nine km from the finish—not enough to be called a climb, but enough that Sky, controlling the peloton, to push the pace in an attempt to discomfit the sprinters.

It was at the base of this small rise that the two breakaway riders, Marco Bandiera (Androni) and Andrea Fedi (Neri Sottoli) were reabsorbed, having ridden almost the whole stage out front waiting to be caught.

After the catch Sky sent Edvald Boasson Hagen and Dario Cataldo to the front. Tinkoff’s Nicolas Roche tried an attack, but the Sky duo was pushing so hard Roche got nowhere.

Briefly at about five km to go gaps started appearing, with Boasson Hagen, now with teammate Ben Swift, followed by Roche and race leader Cadel Evans alone a head of a group of a couple dozen, ahead of another group with some sprinters in it.

By the three-km banner though the peloton had reassembled, though as in Stage Four FDJ’s Nacer Bouhanni found himself at the back of the bunch and needing to hustle to get to the front in time for the finish.

The run-in to the line in the town of Salsomaggiore was tight and twisting, with a pair of 90-degree bends at 1.3 k and 100 meters leading to a roundabout at 700 and another turn, this one more than 90 degrees, followed by a long sweeping turn at 400 and a200 meters of a straight sprint.

FDJ’s Sebastian Chavanel brought Bouhanni to the front at 1500 meters, just in time for the first 90-degree bend; he followed Chavanel through the corners with BMC’s Michael Matthews right behind.

The leaders negotiated all the turns until the final sharp bend 700 meters out. Bouhani, Matthews, and Trek’s Giacomo Nizzzollo made it through but behind them Tyler Farrar, Garmin-Sharp’s sprinter, entered the last big turn too fast, slid low-side, and took down a swathe of riders.

Giacomo Nizzollo took the inside around the final bend and started his sprint almost 300 meters out, with Bouhanni and Matthews tucked in behind. Bouhanni came by on the right, then Matthews went wide right and also launched, but couldn’t match the pace of the flying Frenchman.

Evans should be able to keep the Maglia Rosa through Stage Eleven a long (249-km) haul from Collecchio to Savona with a cat Two climb starting sixty km from the beginning and another peaking 30 km from the finishing line. Most of the last 30 km are downhill, with about five km flat to the line—not a great situation for an attack by a GC contender, but a breakaway of backmarkers might survive if they can hold a sufficient gap up the last climb. Don’t count on it.

Another possibility would be a daring five-km time-trial break for the finish; the serious time trialers will be saving their legs for Thursday’s Sateg Twelve, an actual 42-km individual time trial with a Cat 4 climb in the first third and a good-sized lump leading to a five-percent uphill finish.