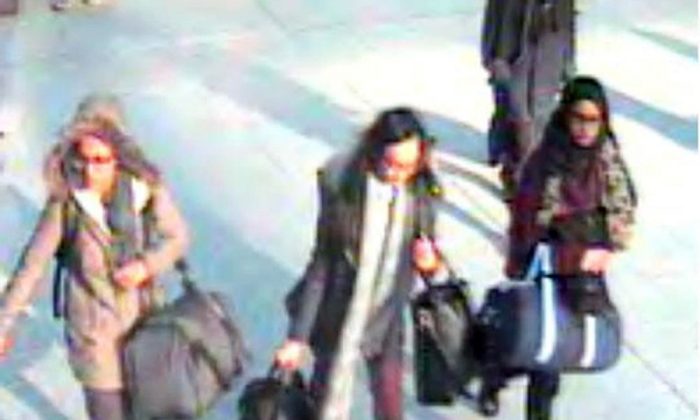 This is a still taken from CCTV issued by the Metropolitan Police in London on Monday Feb. 23, 2015, of 15-year-old Amira Abase, left, Kadiza Sultana,16, centre, and Shamima Begum, 15, going through Gatwick airport, south of London, before they caught their flight to Turkey on Tuesday Feb 17, 2015. (AP Photo/Metropolitan Police)
Middle East

Last weekend’s disappearance of three female British teenagers from London, who are now believed to have entered Syria to join the Islamic State in Iraq and Syria (ISIS), has prompted many questions about how joining a terrorist organization, known for its extreme brutality and violence toward women, could be so alluring.

This isn’t the first time women have left their families to join the terrorist organization. British security officials estimate that at least 50 female Britons have done the same.

A think tank may have some answers after it translated an ISIS manifesto that deals with the role of women in society called, “Women of the Islamic State: A Manifesto on women by the Al-Khanssaa Brigade.” The all-female brigade was created in the Syrian city of Raqqa, an ISIS stronghold, to crack down on male activists who try to avoid detection by dressing as women.

The document was translated by counterextremist think tank Quilliam Foundation, which describes the writings as a “perversion of feminism.”

ISIS Blows up Church of the Virgin Mary in Iraq: Reports

In it, women are deemed to play a central role, but only so far as the jihadi ideology permits her. “She may be important, but she faces myriad restrictions and an imposed piety that is punishable by hudud punishments,” reads Quilliam’s synopsis of its translation.

The translation of the manifesto states the role of women in ISIS is defined as the “divine duty of motherhood” and that “women have this Heavenly secret in sedentariness, stillness and stability.” A woman is expected to stay in the “house with her husband and children.”

Quilliam notes that, as ironic as it sounds, “it appears that many of these women are drawn to this oppressive lifestyle because of the level of influence, or apparent influence, which is bestowed upon them.”

On its many social media accounts, ISIS seems to be adept at making its society appear appealing to women by giving off the appearance of having “a sense of empowerment and sisterhood which is absent for many of these women in Britain,” said Quilliam in a blog post.

In September, a woman secretly filmed what life is like for women in Raqqa. She is dressed in a black niqab, which is mandatory for women to wear, and walks through the city as armed men watch. In the video, she is questioned by a guard, who tells her, “You have to behave better when you’re in public” and adds, “We see your face,” implying that her veil was problematic.

However, in recent weeks, ISIS has clamped down on women’s movement and dress. Now, women can only be outside with a man at all times, wear a double-layered veil, gloves, and a cloak. If they don’t comply, they could be fined or beaten, or possibly worse.

“It could be argued that [ISIS] never wanted us to find their manifesto as it was never translated into English by the group. Nevertheless many of our young women who leave to join Islamic State remain unaware of this bleak reality, and thus are in for a rude awakening,” concluded Quilliam.

In the translated manifesto, there’s much talk about the situations in which a woman can leave her house. The exceptions for a woman to leave the home are: If she’s going to go study theology, if she is a doctor or teacher for women, or if she is permitted to fight “as the women of Iraq and Chechnya did, with great sadness” because ISIS’s situation has become dire, according to the manifesto.

Indeed, in the undercover footage, a niqab-clad woman is spotted roaming the streets with an assault rifle strapped to her back as she heads into a playground with a child.

And how are the women doing now, according to the document?

“Al-Khanssaa Media traveled these lands to check on the happy situation that Muslim women face and their return to what was there at the dawn of Islam and the black robes that enrage the hypocrites and their friends,” the translation stated.

The “happy situation” starkly contrasts with an account given by a local activist in Raqqa. Abu Ibrahim al-Raqqawi with the activist group, Raqqa is Being Slaughtered Silently, said women are being forced into marriage, describing the city as a “big prison.” Women are not allowed to leave the city unless they’re age 45 or older, he told CNN on Tuesday.

“ISIS fighters are really sex-mad. … Some of them have two and three wives, and even with that they are trying to find slaves from Yazidi girls,” he said.