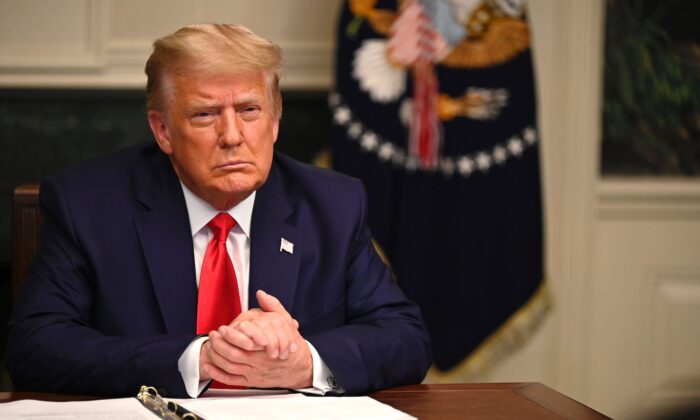 President Donald Trump participates in a Thanksgiving teleconference with members of the United States Military, at the White House in Washington, on Nov. 26, 2020. (Andrew Caballero-Reynolds/AFP via Getty Images)
Middle East

‘Think It Over’: Trump Sends Warning to Iran After Rockets Hit US Embassy

President Donald Trump issued a warning to Iran after rockets were fired at the U.S. Embassy in Baghdad, Iraq.

Posting on Twitter a photo of the purported rockets, Trump said that the “embassy in Baghdad got hit Sunday by several rockets.” He made the comments as he was traveling to Mar-a-Lago in Florida for Christmas.

“Three rockets failed to launch. Guess where they were from: IRAN. Now we hear chatter of additional attacks against Americans in Iraq,” Trump wrote.

Trump then warned: “Some friendly health advice to Iran: If one American is killed, I will hold Iran responsible. Think it over.”

The photo Trump included appeared to show Katyusha rockets, which are typically used by militia groups in the region. In 2020, Katyusha rockets have been fired by groups at the U.S. Embassy and military bases in Iraq.

About a year ago, U.S. officials confirmed the killing of Iranian commander Qassem Soleimani via a drone strike, saying he was preparing attacks against American assets in the region. They also noted that Soleimani was responsible for the deaths of hundreds of soldiers and contractors over the years.

After Soleimani’s death, Iran launched a barrage of missiles at U.S. bases in Iraq, causing minor injuries to dozens of soldiers.

Suspected Iranian-backed militia groups in the country have launched subsequent missile attacks on U.S. assets, including the embassy in Baghdad, since Iran’s missile salvo in January.

…Some friendly health advice to Iran: If one American is killed, I will hold Iran responsible. Think it over.

But some officials have said it’s not clear if Iran was behind the latest rocket attack.

“I do not know the degree to which Iran is complicit,” Gen. Frank McKenzie told the Wall Street Journal Tuesday. “We do not seek a war, and I don’t actually believe they seek one either.”

However, Secretary of State Mike Pompeo on Sunday said Iran-backed militias were behind the incident.

“The same militias targeting diplomatic facilities are stealing Iraqi state resources on a massive scale, attacking peaceful protesters and activists, and engaging in sectarian violence,” said Pompeo. No Americans were injured, he said.

The most prominent Iran-backed group, Kataib Hezbollah, said that it wasn’t behind the rocket attack on Sunday.

“The bombing of the embassy of evil at this time is an uncontrolled act, and the relevant authorities should follow up and arrest the perpetrators,” said a statement from the group, according to VOA News. “We condemn the indiscriminate shelling of the military barracks of the American Embassy because it is a real threat to civilian lives,” it said.