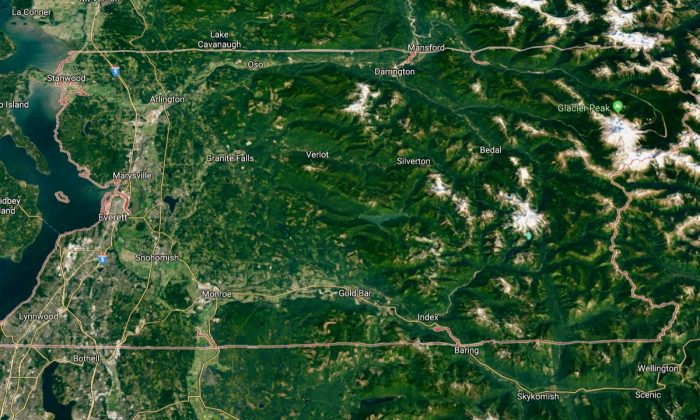 Snohomish County, Wash., where a woman broke her ankle stealing packages from a porch. (Screenshot via Google Maps)
Crime and Incidents

Home surveillance video captured the moment a thief snags a package off a women’s porch before slipping and breaking her ankle.

The package thief can then be seen getting briskly carried off and stuffed into a car by the getaway driver, in a version of the video posted by Daily Mail.

Earlier footage from a security camera apparently located above a garage door shows a UPS driver dropping off a load of packages at the Snohomish County, Washington, home. A black car arrives on the scene, and a woman runs across the grass and onto the porch.

On her way back to the car, she slips on the lawn. She can’t stand up on her own, nor with the help of the getaway car driver. He ends up having to pick her up. The security camera closest to the front door shows the moment clearly.

The driver then goes back to steal the packages after putting the woman in the car, in the version of the video posted via Q13 News.

The homeowner, Lizeth Ababneh, recorded the crime via Nest and Ring security systems, according to the Daily Mail. The Snohomish County Sheriff’s Office opened an investigation. The couple apparently stole from another house nearby as well.

In Tacoma, Washington, Jaireme Barrow invented a clever device to deter repeated package thefts from his front porch. Even after his home security system captured at least 20 suspected thieves, police arrested no one, according to CNN.

Barrow invented a device that triggers a blank shotgun shell to explode when a thief tries to lift a package.

“It’s a blank shell. Just a loud noise,” Barrow told CNN. “This is the only thing that has worked. It’s nice to see them leave empty-handed.”

Barrow calls the device The Blank Box and sells it online.