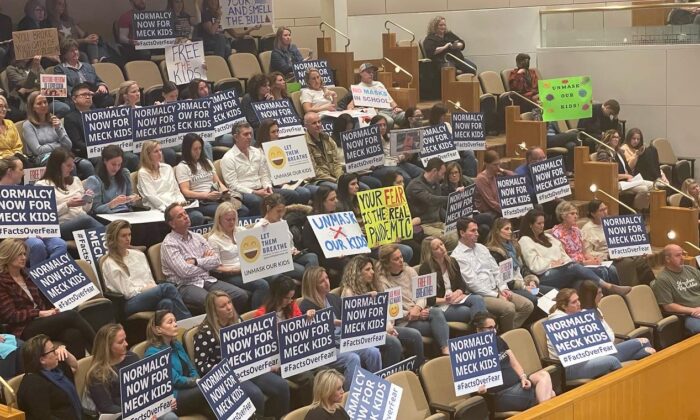 After a contentious Mecklenburg County Commission meeting in North Carolina, commissioners unanimously voted to lift its mask mandate on Feb. 16, paving the way for the Charlotte-Mecklenburg School Board of Education to follow suit on Feb. 22.

The commissioners voted to lift the mandate on Feb. 26, while the school board voted to end its mandate on March 7.

In the commissioners’ meeting during final remarks, Commissioner Susan Rodriguez-McDowell expressed disdain for members of the audience who were endorsing a vote for optional masks.

“This is an extremely homogeneous group,” Rodriguez-McDowell said. “We have a majority minority community, and this group has acted as if COVID isn’t real.”

She alluded to there being “two Charlottes,” which she expounds on in a later press release.

In closing, she said, “God help us,” into the microphone.

Later, she issued a statement alleging that “local right-wing media” had “produced a highly edited video and other propaganda pieces which depict me in an extremely negative light.”

She didn’t specify what media outlet had edited what video.

“First, during the public comments portion of the meeting there is a ‘hot mic’ moment when I use the word ‘disgusting’ under my breath when reacting to sarcastic and nasty comments directed at a mother with immunocompromised kids who spoke in favor of keeping the mask mandate,” she said. “I regret that the comment is picked up on the hot mic—but that was my gut reaction in the moment. I’m human, I stand by it.”

She said she was expressing disapproval for their behavior, but not their speeches.

“Because there are no microphones on the audience, their offensive heckles and jeers are not able to be heard on the video,” she said.

Rodriguez-McDowell said she is being criticized for suggesting that the audience members were racists, to which she countered that she was “calling on them to show sensitivity to those who are vulnerable.”

“When I said that there are two Charlottes, I am referring to the wide disparity between those who are marginalized in our community and those, like myself, with privilege,” she said.

In reference to the “majority minority community,” she said she was pointing to race demographics.

“It is widely known that COVID-19 took a proportionally higher toll on minorities in Mecklenburg and across the country in terms of deaths and hospitalizations,” she said.

On her statement, “God help us,” she said she “stands by her disappointment with the crowd,” but she said she apologizes “for reacting in the heat of the moment with my unfiltered feelings.”

Later in her statement, she alleged that the group in the crowd was a part of a political movement.

“They have an agenda and tactics that are all about dividing us with hyperbole, chaos, and conspiracies… sound familiar? As a county commissioner my work is focused on making life better for people through public health, environmental stewardship, social services, job creation, etc – not culture wars,” she said.

The woman with immunocompromised children to whom Rodriguez-McDowell was referring is Stacy Staggs, who spoke against lifting the mask mandate in public comment at the meeting.

“I want you all to consider who you’re helping, and who you’re hurting. Lifting the mask mandate adds risk and thus hurts children. It also hurts black and brown bodies in our community” she said, echoing Rodriguez-McDowell’s statement that COVID-19 is race-related.

It was after this statement that some in the audience reacted.

Staggs went on to say that because it’s Black History Month, wearing a mask should be considered as an act of compassion.

“I’d like you to reconsider, although the message is very clear: My children, kids like ours, those who are immune-compromised, are not welcome in the county of Mecklenburg,” Staggs said.

‘They Make Me  Sick’

It was after this final statement that the audience reacted again, and when the microphone picked up someone on the board saying, “Unbelievable. Disgusting. They make me sick.”

Commissioner Laura Meier issued a press release on Feb. 21 in which she identified herself as the person who said, “They make me sick.”

Meier said she made the comments under her breath—unaware that the microphone was on—in reaction to parents in the crowd she said were being disrespectful during Staggs’s presentation.

“She pleaded with us to keep the mandate and spoke about her two immune-compromised children,” Meier said in her statement. “The crowd jeered and yelled sarcastic comments, and our Chair promptly reprimanded them. At around this moment, my mic was ‘hot’ and I said, under my breath, ‘unreal’ and ‘this makes me sick’ or something to that affect.”

Meier said it was a reaction to what she called the audience’s “disregard for others.”

‘Their Disdain was on Full Display’

“That’s not what happened,” Brooke Weiss, chairwoman for the Mecklenburg chapter of Moms for Liberty, a parental rights advocate organization, told The Epoch Times. Weiss, who was in the audience, said that the people weren’t reacting to the Staggs’s statement about her immunocompromised children, but other comments made by Staggs, with whom Weiss said many in the crowd have had a previous antagonistic relationship.

“She’s called Moms for Liberty racist, and has attacked me personally,” she said. “She’s made very disparaging comments about members of our group, so a lot of us are familiar with her. I certainly have sympathy for anyone with two immunocompromised children, but she should be able to make her own choice on masking, and so should we.”

Weiss attributed what she said was the board’s animosity to never having faced pushback before.

“They were caught off guard,” Weiss said. “A lot of people were calling them out, saying, ‘You had no right to do this in the first place; it’s gone on way too long. You didn’t have our best interest in mind.’ They were being called out and they didn’t like it.”

For Weiss, who’s attended numerous board of education meetings, the board of commissioners’ response was new, she said.

“I’ve never seen a board attack its citizenry the way that they did,” Weiss said. “Their disdain was on full display.”

Weiss said there were people groaning, but that “it didn’t get out of hand.”

On being referred to as a homogenous group, Weiss said the implication was that they are racists only representing white people.

“We’ve never suppressed or tried to keep anyone out of our group,” Weiss said. “And to say we are homogenous—my family is Jewish. There were various minorities represented in the group. The fact is that the 6th district is mostly a white area and that’s where most of us came from. It’s not our fault that other districts weren’t represented there.”

Currently, there is a bill called the Free the Smiles Act that has passed in the House and the Senate and is waiting to be signed or vetoed on North Carolina Gov. Roy Cooper’s desk. The bill would give parents the discretion on masking their children. Cooper, a Democrat, encouraged local governments and schools to end their mask mandates, citing lower case numbers and more people getting vaccinated.

“We are taking a positive step on mask requirements to help us move safely toward a more normal day-to-day life,” said Cooper in a Feb. 18 press conference.