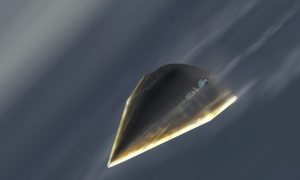 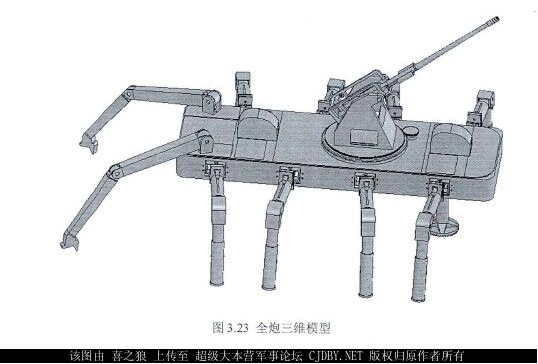 Weapons designers in China may be watching too many Japanese cartoons. A new military vehicle design published in a Chinese science journal shows a car-sized 11-legged walking combat robot dubbed the “Crab Walker.”

The Crab Walker would be about 18 feet long, comes with a 30mm autocannon mounted on top, and is designed to crawl over rough terrain. It has four legs on each side, as well as two in the back and one on the front to help it keep stable while firing.

The proposal for the Crab Walker was published in China’s Journal of Ordinance Industry Automation. It was originally published in 2013 as a thesis from master students at the Nanjing University of Technology. The science journal doesn’t have a website, but the thesis was published on the China National Knowledge Infrastructure (CNKI), China’s largest online library.

The idea of a walking killer robot actually has some reasoning behind it. Its design would forseeably allow it to operate in mountainous terrain otherwise inaccesssible by vehicles on wheels or treads—such as the mountainous regions of Tibet or in disputed territory along the Indian border.

The concept is similar to walking robots being designed by U.S. firms, such as the “Big Dog” robot that can carry military equipment over rough terrain.

Research on the Crab Walker has been ongoing. The researchers have published at least three reports on the concept, and note improvements they’ve made using different equipment. They note a new update to the Crab Walker’s frame gives it better stability while firing its autocannon.

Chinese researchers are already running tests on the Crab Walker. A recent report’s abstract states they’ve run a performance simulation test likely in a virtual environment, which “proved that the frame body can walk smoothly and achieve a left turn, walk straight, turn right, and other functions…”