‘There Might Be a Need for an Indictment’ of Baby Formula Producer Abbott: Speaker Pelosi 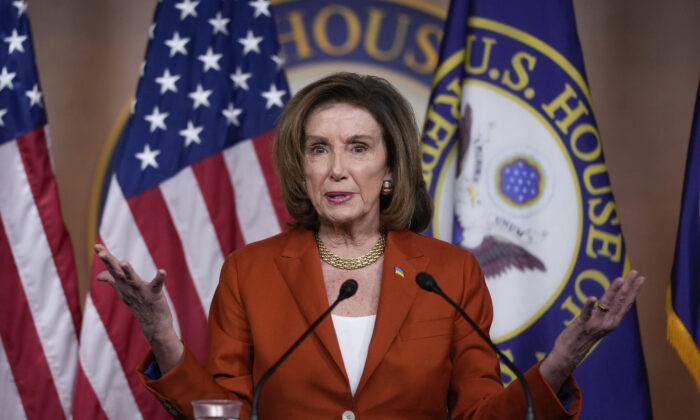 Speaker of the House Nancy Pelosi (D-Calif.) speaks during her weekly news conference on Capitol Hill in Washington on March 9, 2022. (Drew Angerer/Getty Images)
By Joseph Lord

Speaker of the House Nancy Pelosi (D-Calif.) said on May 18 that Abbott Nutrition, the company at the center of the ongoing baby formula shortage, could face criminal charges.

Though the White House and Food and Drug Administration (FDA) have attempted to curtail the shortages, photos have continued to circulate on the internet showing whole aisles empty of baby formula.

Following the decision by Abbott Nutrition—one of the largest and only producers of baby formula in the United States—to recall large amounts of baby formula in February over safety concerns after several infants allegedly died from consuming it, supply decreased dramatically.

However, Abbott has denied Democrats’ charges that its formula was contaminated, saying that the safety standards of the factory were entirely consistent with Food and Drug Administration (FDA) guidelines.

Still, following the charges an Abbott plant in Sturgis, Michigan—one of Abbott’s largest factories—was temporarily shuttered, depriving U.S. consumers of one of the largest sources of baby formula in the nation.

Now, Pelosi is calling for the company to face criminal charges for their role in the shortage.

“I think there might be a need for indictment,” said Pelosi, who has realigned the House agenda to address a baby formula shortage.

On Tuesday, Democrats introduced a $28 million bill that would strengthen the FDA by providing more funds for employees and inspections in order to get Abbott’s largest factory up and running again.

Democrats are also looking at methods of tracking and cataloging the supply of formula across the nation.

Another bill would require Abbott and other baby formula producers to report “what kind of supply [of formula] they have” in times of scarcity.

“There is also some attitude in the country that there is plenty of supply and just not all in the right places,” Pelosi said. “And there must be a computer program that tells us where that is. If that is so, then let’s get that moving right this minute into the mouths of babies.”

But, Pelosi suggested, this isn’t enough.

“We have a stronger hand to play here, if we would be willing to do so,” she said.

The charges against Abbott originated with a whistleblower report from a disgruntled former employee at the factory who had been fired by the company.

“This company has lied, it has cut corners and falsified records to cover up misdoings at the sake of infant health,” said Rep. Rosa DeLauro (D-Conn.), a longtime advocate of stricter safety standards for food who first unveiled the whistleblower report.

On May 16, the Department of Justice (DOJ) announced that it had filed a criminal complaint against Abbott over the alleged safety violations. However, the DOJ also suggested that it was willing to provide Abbott with a consent decree outside of court in order to allow the Sturgis plant to reopen under stricter safety guidelines.

Already facing grim prospects in the 2022 midterms over inflation, rising crime, and unprecedented illegal immigration, Democrats are anxious for a quick resolution to the ongoing shortages.

Aside from the measures being considered in the legislature, President Joe Biden has also sought to work out deals allowing for more foreign imports of baby formula.

Additionally, on May 16, the FDA and Abbott reached a deal that would allow Abbott to reopen the Sturgis plant. However, the company has said that even when the plant is reopened, it could take between eight and ten weeks for the formula to refill dwindling supermarket supplies.

Next week, Abbott officials are set to appear before the House Energy and Commerce Committee to testify on the ongoing shortages and the safety standards practiced by the Sturgis plant.

Abbott could not be reached for comment by press time.