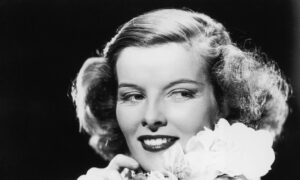 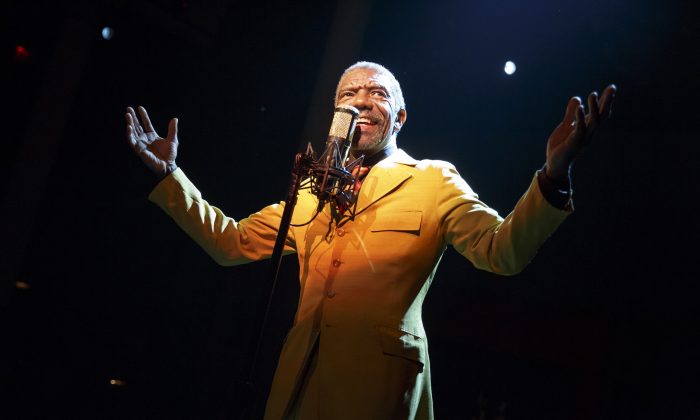 Message and music go hand in hand
By Judd Hollander

NEW YORK—Containing elements of racism, religion, political turmoil, and more than a little ironic satire, the musical drama “The Total Bent” explodes off the stage at The Public Theater. The work offers a journey both thrilling and insightful, despite its sometimes flawed storytelling.

With a text by Stew and music by Stew and Heidi Rodewald, the play is set in Montgomery, Alabama, at the dawn of the civil rights movement.

Papa Joe Roy (Vondie Curtis Hall), a once-lauded gospel blues singer, has become a disgraced and forgotten man. Believing too much in the power of his own words, he turned to faith healing as a means for easy money, only to be exposed as a fake, which led to his downfall.

Now in the midst of trying to record a so-called comeback-crossover album, he not only has to face a world of altered tastes and attitudes but also the disdain of his son Marty (Ato Blankson-Wood).

A singer and rising star in his own right, Marty wrote many of the tunes that helped propel Joe to fame. The younger man is now determined to use his music to illustrate the changing racial tones of the time.

Joe would rather avoid this path. He believes people prefer their medicine and messages in small doses, rather than having them shoved down their throats.

Caught between the two is Byron Blackwell (David Cale), a wannabe record producer from England. He sees in Marty a raw untapped talent and wants to get him under contract.

Blankson-Wood is simply electrifying as Marty.

However, Byron is also an avid music collector, and when he meets Papa Joe, the producer is overjoyed at being in the same room with the man he and his peers back home consider a legend. He begs for the chance to make a record with Joe.

Joe, who has a long unhappy history with music producers, eventually agrees, but only if Blackwell eases off on his plans for Marty.

The father-son conflict is the fulcrum around which “The Total Bent” ultimately revolves. Joe excuses his prior actions (other than faulting his so-called God-given charisma) by saying that he basically had no choice thanks to the different rules for blacks and whites in society.

Meanwhile, Marty is so angry at his father for what happened in the past, he fails to foresee his own fate as the ultimate irony. In his fierce determination to get his message across, he doesn’t realize until too late how he’s become a commodity packaged for mass distribution, and thus exactly like those he despises.

Folded into Marty and Joe’s story is the message that one must be wary of false prophets: those who claim to preach the word of God but are actually more interested in making money off their enamored listeners. Joe puts over this point brilliantly in a number where he warns “Beware of the TV Preacher.”

The show also contains a very telling moment on the issue of payback. Seeking revenge for past injustices, whether personal or to a race as a whole, can slowly and subtly change a person. An idealist wanting to sing about the Montgomery bus boycott can turn into an “Electronic Uncle Tom.”

This idea is crystallized in an almost throwaway line spoken by one of Marty’s entourage/backup singers (Curtis Wiley). He equates “the auction block” to Marty’s performance fees.

A fascinating piece of work, “The Total Bent” unfortunately falls somewhat apart toward the end. Characters drop in and out of the narrative abruptly, without the chance to give the audience the sense of closure the situation calls for. It’s an issue the show’s creative team will hopefully remedy when taking “The Total Bent” to the next level.

The score, on the other hand, is simply amazing. The various tunes and styles—ranging from gospel to hard driving rock—perfectly capture the spirit of the show’s era, as well as the temperaments of the characters. It helps that Stew and Ms. Rodeweld are part of the onstage band.

Seeking revenge for past injustices, whether personal or to a race as a whole, can slowly and subtly change a person.

Cale is very good as Byron Blackwell, combining the elements of a man trying to do the right thing with just a bit of the sleaze of someone attempting to put together a deal without all the elements in place. His unbridled joy at meeting Joe makes one believe he really is one of those collectors who would think nothing of spending hours going through dusty record bins in the hope of finding that one special recording.

Hall is excellent as Joe, a man weighed down by years of bitter experience, and a father trying to prevent his son from rushing headlong toward his destruction.

Blankson-Wood is simply electrifying as Marty. In perfectly embodying a young man wanting to throw off the chains of his past while trying to find a way to channel his anger, his performance is nothing short of a revelation.

Theater Review: ‘Do I Hear A Waltz?’

The actor also quite effectively shows Marty battling insecurities as he starts to make his own way. His uncertainties can be seen in a recording session as he tries to sing from the microphone his father always used—one which the younger man may not be ready to claim as his own.

Despite its structural flaws, “The Total Bent” is a brilliant piece of theater and a stellar example of the power of music and the messages it can convey.

Also in the cast are Kenny Brawner, Damian Lemar Hudson, and Jahi Kearse.

Judd Hollander is a member of the Drama Desk and reviewer for Stagebuzz.com and TheaterScene.com