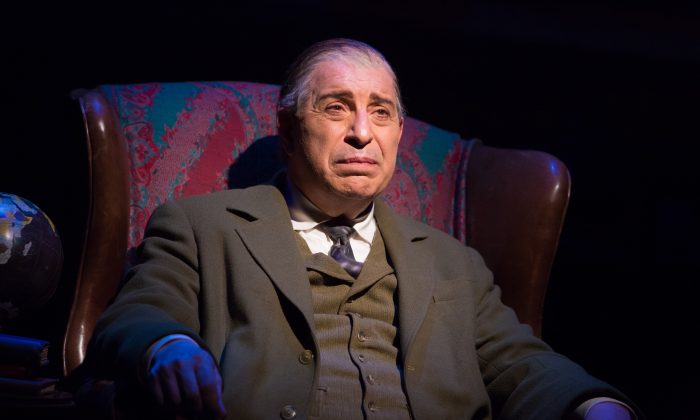 Max McLean in “The Most Reluctant Convert.” McLean wrote as well as co-directed the play with Ken Denison. (Jeremy Daniel)
Arts & Culture

Theater Review: ‘The Most Reluctant Convert’

NEW YORK—Max McLean masterfully embodies British novelist, literary critic, and scholar C.S. Lewis in the quietly moving one-man show “The Most Reluctant Convert.” The man who penned “The Chronicles of Narnia,” Lewis was a confirmed atheist, who, after years of intellectual inquisitiveness, came to believe in the existence of God, Jesus Christ, and a world beyond the one in which we live.

In his study at Magdalen College, Oxford in 1950 (where he was on the faculty for over 25 years), Lewis recounts, in a scholarly and at times nonlinear fashion, events that shaped the beliefs he now holds.

The final step in this process occurred in 1931 while riding in a sidecar on his way to a zoo. He explained: “When we set out, I did not believe that Jesus Christ is the Son of God. When we reached the zoo, I did.”

This journey had begun decades earlier when, as a child, his brother gave him a gift of twigs, moss, and flowers. Lewis recalls how a feeling of joyous wonder overtook him while gazing at this simple treasure, and he would spend years trying to regain this state.

As Lewis begins to describe this progression in more detail, the audience gets an insight into the person he was and how, rather ironically, religion often figured negatively in his formative years. He said his prayers and went to church chiefly because that’s what people of his social strata did at the time.

He never felt a particular pull toward what was being said in the pulpit. This lack of feeling was also apparent in most of his early educators, who generally treated religion as a sort of “endemic nonsense.”

Perhaps most telling were his unanswered pleas to God to spare his mother from the illness that would take her life when he was only 9. The resulting bitterness stayed with him for some time thereafter, into his years at the front during World War I. There, despite the constant fear and horrors he experienced, he “never sank so low as to pray.”

Sprinkled throughout the story and integral to the piece are the conundrums and ultimate realizations Lewis faced. Many had an ironic twist, yet each enabled him to take ideas and elements from what would seem at first glance the most unlikely of places and use them as stepping stones on his own path.

These twists include the lengthy estrangement from his father, who had great difficulty connecting emotionally with his sons, particularly after his wife’s death. Yet Lewis’s father was also a successful solicitor and a master of distilling facts and framing narratives. Lewis freely acknowledges that he inherited his father’s gift for oratory.

One gets an even clearer picture of Lewis as he elaborates on his search for answers. He approaches the matter from a largely intellectual standpoint, and ultimately concludes that if certain points and situations follow one another, as with figures and symbols of an equation, then one cannot deny the resulting outcome.

He gains glimmers of the solution through his love of ancient myths; through the various books, by authors both Christian and non-Christian, he’s read; from conversations with various intellectual contemporaries (including J.R.R. Tolkien, the famed author of “Lord of the Rings”); and through a growing refusal to believe that the human mind is simply the result of a random collection of atoms colliding in one’s skull. The final step in these understandings came together on the trip to the zoo.

As the title makes clear, Lewis eventually came to his conversion begrudgingly, though McLean’s performance makes clear the great contentment and wonder he felt when he finally got there. It is also the play’s great strength that the certainty Lewis eventually experienced is never forced on the audience. The work leaves it to those watching the play to decide what to take away from the tale.

McLean, who wrote as well as co-directed the play with Ken Denison, wonderfully embodies Lewis, presenting him as a fully formed individual. The character speaks in clear, genial tones and sounds like a welcoming professor inviting his listeners to come in and hear his latest lecture.

The organized clutter of the set design of Lewis’s study works nicely. Also quite good are the projections, including those of a night sky and the college grounds.

Presented by Fellowship for Performing Arts, this thoughtful and introspective work “The Most Reluctant Convert” recounts one man’s spiritual transformation, and asks us not to necessarily agree with the outcome but to see how Lewis came to believe it himself.