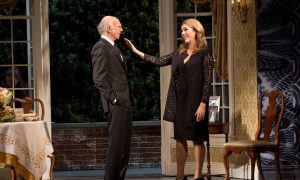 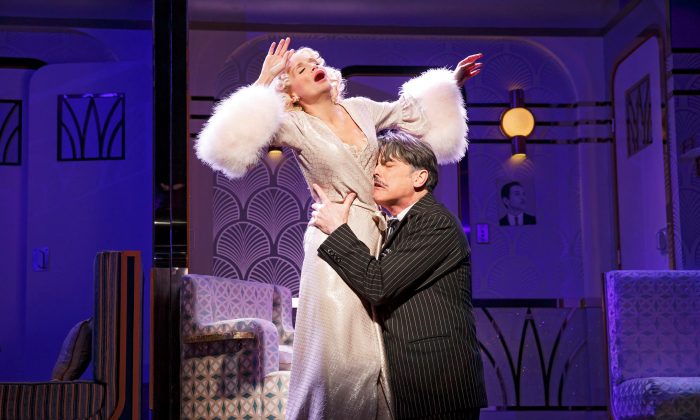 Theater Review: ‘On the Twentieth Century’

NEW YORK—Not since Judy Holliday has Broadway seen an actress with the comedic chops of Kristin Chenoweth. And can she sing!

Chenoweth shows so many subtle nuances as she makes this role her own that other excellent performances by Peter Gallagher (as Oscar Jaffee), and Mark Linn-Baker and Michael McGrath (as the character’s sidekicks Oliver Webb and Owen O’Malley, respectively), in addition to a universally strong cast, have a hard time reaching her level.

Written by Adolph Green and Betty Comden with music by Cy Coleman, “On the Twentieth Century” is a revival of the 1978 Broadway version. It is a stunning reminder of the opulence of the fabled Twentieth Century train that served the moneyed set as they traveled from Chicago to New York in 16 hours.

Has-been and recently disgraced producer Oscar Jaffee (Gallagher) and his two sidekicks are on a wacky journey. Oscar is attempting to sign his ex-lover and current movie star Lily Garland (Chenoweth) to an as yet unwritten play, with her starring as Mary Magdalene.

Chenoweth’s soaring soprano is a standout.
Lily enters the train with the highly muscled but IQ-deficient boy toy Bruce Granit (well played by Andy Karl), and hysterical high jinks follow as they move from one drawing room to another. Oscar and his party meet Mrs. Primrose (Mary Louise Wilson), a religious fanatic and would-be financial savior whose real identity is quite a surprise.

In fact, the overall direction by Scott Ellis and choreography by Warren Carlyle are outstanding because we are constantly surprised in this production. There are unique numbers from four porters who sing and dance up a storm: Rick Faugno, Richard Riaz Yoder, Phillip Attmore, and Drew King. And choreographer Warren Carlyle gives us quite a surprise from Mrs. Primrose—but I won’t give that away.

A Roundabout Theatre Production, the costumes designed by William Ivey Long are stylish and beautiful. The sets, including the train itself, by David Rockewell are creative and fun. Sound design by Jon Weston and lighting by Donald Holder help round out the adventure. The choreography by Carlyle is nothing short of brilliant.

This fast-paced revival is one for the books and should head for Tonyland. It provides a great evening of musical theater, and Chenoweth’s star should burn brightly for some time after this memorable performance.

Nanci Callahan is the founder and managing director of the West Side Cultural Center. She may be contacted at ecofest1@gmail.com.