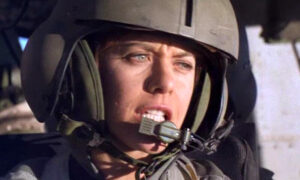 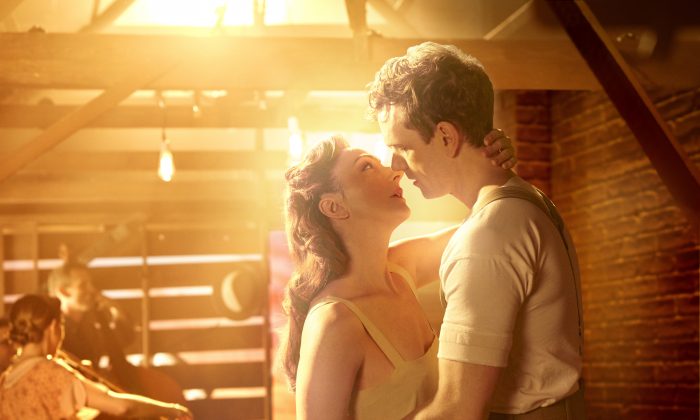 NEW YORK—There’s warmth and anguish aplenty in the new Broadway musical “Bright Star,” a tale about the bonds of family—for good and for bad. With music, book, and story by Steve Martin, and music, lyrics, and story by Edie Brickell, this sentimental and often heartbreaking offering is now at the Cort Theatre.

In 1945, Billy Cane (A.J. Shively) has returned from World War II to Hayes Creek, North Carolina, and dreams of becoming a writer. With the support of his father (Stephen Bogardus) and longtime friend Margo (Hannah Elless), who has secretly loved Billy for years, he journeys to the city of Asheville.

There he meets Alice Murphy (Carmen Cusack), the hard-as-nails editor of a literary magazine, who has no time for levity and little patience for fools. He also meets Alice’s assistants, the rather gloomy Daryl (Jeff Blumenkrantz) and the very pretty Lucy (Emily Padgett). The latter drops some very clear hints about her own interest in Billy.

At this point, the story flashes back to 1923, when the then 16-year-old Alice was living in a small rural town and dreaming of all the wonders the world had to offer. She was also the smartest and most upfront girl of her age.

She took guff from no one—be it her father (Stephen Lee Anderson), who long ago washed his hands of her; her mother (Dee Hoty), who vainly tries to act as peacemaker between the two; or Jimmy Ray Dobbs (Paul Alexander Nolan), the young man she’s set her sights on.

However, Jimmy Ray’s father (Michael Mulheren) is determined his son marry a proper sort of girl from the right side of the tracks and follow him into the family produce business.

The storylines involving Billy and Alice play out simultaneously over the course of the show before finally dovetailing to bring all the participants together. Telling more would be giving away a major development—one that felt obvious long before it was revealed. At the same time, the show avoids falling into other predictable plot twists, such as an unnecessary love triangle or the easy out of using youth as an excuse for one’s actions.

What makes the show resound so powerfully is that “Bright Star,” which was inspired by a true event, is first and foremost a story about family. The chief lesson here is that while such ties do indeed bind, they can also strangle you if you’re not careful.

Jimmy Ray’s father does his best to end his son’s romance and finds in Alice’s father a not-so-unwilling kindred spirit in this mission. The elders tell themselves that such actions are all for the best.

Mulheren’s character makes this point clear with the very dark number “A Man’s Gotta Do.” As he himself was given no choice about his own future, he is now channeling his own years of bitterness onto the next generation.

At the same time, the show demonstrates forgiveness and the knowledge that with age comes understanding—a point made clear in a quietly touching scene between the adult Alice and her father. He acknowledges the wrongness of his past actions and she, through her response, grants him the absolution he’s sought for so long. At the same time, the act of forgiveness allows Alice to start letting go of the anguish she’s carried inside for over 20 years.

Another moment showing the more tender side of family occurs when Billy mourns the passing of his mother. He visits her grave to say his goodbyes.

The show demonstrates forgiveness and the knowledge that with age comes understanding.

Making her New York theatrical debut, Cusack turns in a dynamite performance. Her portrayal of a woman who goes through hell and comes out on the other side is nothing short of brilliant.

Shively works well as the young and earnest, but not too naive Billy. Elless gives a nice girl-next-door quality to Margo, and Nolan is good as a young man with his own dreams for the future, brought low at one point, but still loyal to what was long ago.

Blumenkrantz and Padgett meanwhile add some nice bits of comic relief to the proceedings.

The score is delightful and much of it provides an authentic bluegrass feel. Among the more memorable numbers are “Whoa, Mama” with Cusack and Nolan, whose chemistry is palpable, as well as the touching “I Can’t Wait” and the title tune.

Another strong song is “Another Round” with a boogie-woogie beat. It features Shively and Padgett and showcases Josh Rhodes’s excellent choreography.

“Bright Star” is not perfect—the book needs work at points—but it does offer a powerful example of the effect family has on a person’s life and how, when a real and honest love is added to the mix, it can be a wonderful thing indeed.

Plus, you get to experience frog gigging firsthand!