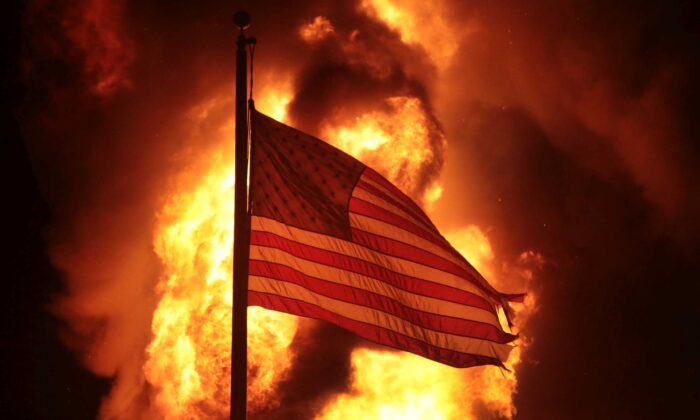 An American flag flies in front of a department of corrections building after it was set ablaze during a second night of rioting in Kenosha, Wis., on Aug. 24, 2020. (Scott Olson/Getty Images)
Viewpoints

Herbert Marcuse and Frantz Fanon are not exactly household names. In fact, most of us have never heard of them. However, they’re names familiar to the more sophisticated of the Antifa and Black Lives Matter (BLM) organizers now orchestrating the riots in cities like Portland, Oregon and Kenosha, Wisconsin.

Now that he has finally denounced street violence, presidential candidate Joe Biden wonders why the organized violence on the streets of Democrat run cities doesn’t suddenly stop. But to the radical Antifa and BLM organizers, the violence makes perfect sense. In fact, in their minds the mere existence of police is proof of fascism. They truly believe—inspired by the words of the likes of Marcuse and Fanon—that it’s their duty to “deconstruct” the institution of the police, as it’s their duty to deconstruct capitalism, and all Enlightenment institutions, including the nuclear family.

This is the critical social justice theory that’s helping to drive the violence on the streets today. The true believers within that committed group fervently believe that assaulting police, setting fire to vehicles and buildings, and verbally assaulting innocent passers-by makes sense. They believe they’re a force for good, and that anyone who opposes them is a reactionary who must be overcome. These people are not influenced by anything Joe Biden says to them, or doesn’t say to them. They’re on a mission. The truth is that the political contest between the Democrats and Republicans is quite irrelevant to them. They’re after revolution.

And they truly believe that they’re the good guys. In their intersectional world—where there’s a clear line between “oppressors” and “oppressed”—they’re on the side of good, as they pillage and burn. When they yell in the ears of elderly people, as they did recently to those people leaving the Republican National Convention, or as they demand that people put their fists in the air in solidarity with BLM, they’re convinced that they’re fighting the good fight against fascism, colonialism, and all the “isms” they don’t like. Only their “ism” counts.

Their critical social justice mindset tells them that other people are responsible for all the bad things in the world, and that they’re the good guys who are justified in forcing other people to accept their plans to make everything right. The “system” isn’t fair, and it’s their job to make it fair—by force, if necessary. That’s what they have been taught—and that’s what they believe.

So the violence continues, and will do so until someone forces these people to stop. This is not to say that most of the people protesting in the streets are radical anarchists. In fact, the vast majority of the people are normal, well-meaning people who would not agree with most of what the Antifa or BLM radicals fervently believe in. But it’s clear how much damage a small but determined group of loosely organized zealots can do when they’re allowed to blend in with the peaceful majority. And the truly bizarre coincidence that masks—normally forbidden—are mandatory during these COVID-19 times, makes it that much easier for these true believers to cause mayhem.

So, where does this radical philosophy come from? How could such dangerous nonsense seep into the minds of young people? Does it come from Russia? China? Iran? Actually, no. You can find it taught by true believer professors and instructors at almost every institution of learning in the United States. Universities have been basically overrun by “studies” courses, such as “gender,” “race,” “fat,” “queer,” “LGBQXYZ,” and on and on. These “studies” become so extreme that ideas such as “decolonizing grammar” or “2+2 only equals 4 to some people” are taken seriously.

They all have in common the idea that all Western Enlightenment thought is racist and misogynistic. In every case, the student is the good guy who must right all the wrongs of a systemically racist and truly awful society. In short, these “studies” courses are largely based on nonsense. The universities—at least the social science faculties—have basically been taken over by this dangerous stuff. And now it’s playing out on the streets.

The death of George Floyd unleashed powerful forces that are now exploding on the streets of America. The pandemic lockdown probably made things a lot worse than they otherwise would have been. The true believers within Antifa and BLM were waiting for just such an opportunity.

Antifa is a committed anarchist group. Although loosely organized, every Antifa member is committed to what he or she would call “anti-fascism,” but what ordinary citizens would call anarchy. BLM differs in that most of the people supporting BLM are not anarchists by any means. In fact, the great majority of BLM supporters are good people who simply want equal respect and protection for black people.

However, the most radical elements within BLM are simpatico with Antifa aims. A look at the BLM website shows that the organizers are trained Marxists, committed to “deconstructing” capitalism, the nuclear family, and all existing “Enlightenment” institutions—which means everything. They are true radicals, and violent revolution is their aim.

But the Democrats thought they could benefit from these radical forces to win the November election. How they used the street violence in their battle with Donald Trump turned a bad situation into something truly dangerous. It must be remembered now that for months Democrat politicians refused to denounce Antifa violence by name. And now they seem powerless to stop it. Portland is the worst example, but many other Democrat-controlled cities are suffering as well. Murder rates are spiking in cities like Chicago, New York, Baltimore, and Los Angeles that are seeing the madness of “defunding the police” at a time when police protection has never been so important.

The insane “defund the police” and similar radical policies called for by the Antifa and BLM zealots are resulting in havoc on a huge scale. The victims in almost every case are the same poor, black people who are supposedly the people BLM represents.

So Joe Biden stares uncomprehendingly into the camera, wondering why his late-stage, tepid denunciation of violence isn’t having any effect.

Clearly, the overwhelming majority of Democrats do not accept the extreme critical social justice and race theories that are driving this violence. However, they have allowed the extremists to take control of the agenda.

Divisive notions such as “systemic racism” and completely bogus documents, such as the “1619 Project,” are meekly accepted without discussion. Completely non-scientific claims like “a man becomes a woman by saying he is a woman” are allowed to become dogma, in spite of the fact that they’re nonsense. Claims that America is a horrid place, and all of its institutions must be burned to the ground, are listened to with no argument.

The year zero was what Pol Pot, the truly crazy Cambodian radical who killed half his country, called what he was after during their revolution “justice.” It was his version of social justice critical theory. All vestiges of the past would be destroyed, and only then would the wonderful world he had in mind for the Cambodian people be in evidence. One can visit the small mountain of skulls that are all that’s left of his imagined Cambodian paradise.

Other such revolutions ended the same way, with a mountain of skulls. Mao’s Cultural Revolution and the French Revolution are the two best known examples. Cultural warriors knew what was right for everyone—or else.

Antifa and BLM violence are building their own pile of skulls. The true believers in their midst are determined to use the current violence and unrest to reshape the world to their liking.

The tragedy is that this madness could easily have been nipped in the bud. After the George Floyd incident the Democrats could have denounced the very obvious Antifa and BLM radicalism that immediately became evident in the streets. Instead, they tried to ride the whirlwind for their own electoral advantage. They insisted against all the evidence that what was occurring were “mainly peaceful protests.” The Antifa and BLM radicals knew better. What they were after was revolution.

And now the Democrats’ weak attempt to blame the violence on “Donald Trump’s America” is seen by the American people for the lie that it is. The fact that the violence is occurring in Democrat-run cities is not an accident, it’s by design. It’s a Democrat plan that has gone terribly wrong.