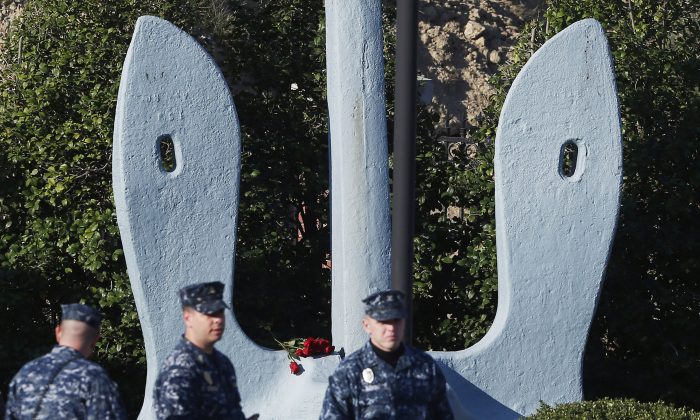 Roses that were placed on an anchor at an entrance of the Washington Navy Yard as security personnel stand watch, Sept. 19. The Washington Navy Yard began returning to near-normal operations three days after it was the scene of a mass shooting in which a gunman killed 12 people. (AP Photo/Charles Dharapak)
Health News

WASHINGTON—When television, movies, and news media portray people with mental illness as violent, it perpetuates a damaging falsehood, according to the President’s New Freedom Commission on Mental Health. A U.S. surgeon general’s report finds that much of this stigma is based on a myth that mentally ill people are dangerous.

Soon after the mass murder at the Navy Shipyard, a portrait emerged of the shooter as a mentally ill man. A predominant theme in the national conversation about mass shootings is that people with mental illness should not be able to buy guns, but experts said this outlook doesn’t consider the facts.

People who are mentally ill are rarely violent, according to Dr. Michael Lindsey, associate professor at the University of Maryland.

“For the most part, people with mental health issues may withdraw and engage in self-indulgent behaviors … we just don’t want people thinking if people have mental illness they are violent. That’s just not the case,” he said.

The National Institutes of Health bears out his opinion. It cited the American Psychiatric Association, which reported research showing “that the vast majority of people who are violent do not suffer from mental illnesses.”

While mass murderers often have untreated mental illnesses, according to Lindsey it only proves that people who need help are reluctant to ask for it.

If society were to destigmatize mental illness, and de-stigmatize seeking professional help, it could prevent tragic outcomes, he said.

According to Lindsey, law enforcement and people close to mentally ill individuals should always take signs of psychosis seriously, and make sure they get treatment.

Lindsey talked about a friend who was a high achieving professional, but began to speak bizarrely after a career disappointment. His thoughts were disorganized—a symptom of psychosis. His wife misread his symptoms, and encouraged her husband to be more stoic, and more optimistic about his future prospects.

Within weeks the man had “a psychotic break,” said Lindsey. Police shot and killed him after he showed up at his children’s day care center carrying an axe. His widow said to Lindsey, “Michael, I wish I would have taken those signs more seriously.”

“A specific unit can be dispatched to the community to de-escalate mental health crises,” he said. Michael Compton, of George Washington University, has established the best practices for law enforcement and mental health issues, according to Lindsey.

When Navy Yard shooter Aaron Alexis called 911 on Aug. 7 with reports of hearing voices and being harassed with microwaves, he should have gotten a psychological evaluation and hospitalization, in Lindsey’s opinion.

When he made that call, “he was asking for help,” Lindsey said. Had a police mental health team been available, the tragedy might have been prevented.

Cultural factors, ideas about masculinity, and a stigma against mental illness block troubled men from seeking care, but treatment can allow individuals to live peaceful lives.

According to a fact sheet from the federal Substance Abuse and Mental Health Services Administration, “Most people who suffer from a mental disorder are not violent—there is no need to fear them. Embrace them for who they are—normal human beings experiencing a difficult time, who need your open mind, caring attitude, and helpful support.”