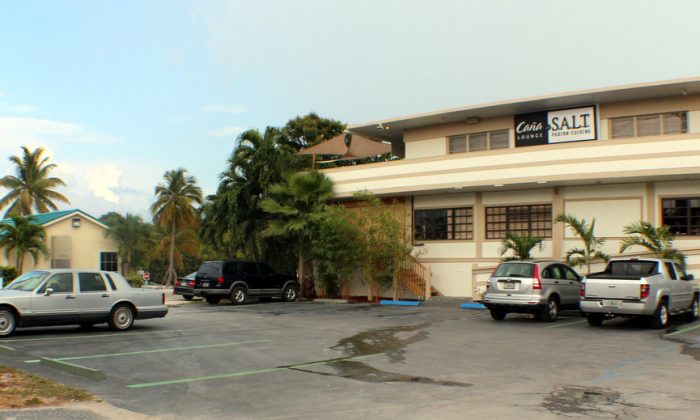 S.A.L.T. Restaurant occupies a newly refurbished building in Islamorada, Florida. Like many buildings in the Florida Keys it is elevated for protection in the event of hurricanes. Cana Lounge is on the top floor. The restaurant is on the main level. (Myriam Moran copyright 2014)
News

“When I have a question I can’t answer I call Chef George,” the manager of another famous restaurant said. The mentor referred to is Chef George Patti founder and partner with Tom Smith in a new restaurant in Islamorada, Florida called S.A.L.T. for Southern, Asian, Latin Tastes. Billed as fusion cuisine and housed in a newly refurbished two story building at Mile Marker 82.7 in the Keys, the place is as the new owners proclaim, ‘stylish yet unconventional.’

By 7 PM S.A.L.T. was packed. Any new restaurant takes time to get started, to develop a clientele. This is especially true in the Florida Keys where there are so many places that offer fine dining. Locals knew Chef George’s reputation. They followed him to his new kitchen to try his featured menu selections.

Born in New Rochelle, New York, he attended Eastchester High School. George graduated from Iona College where he received his degree in Business Administration in 1989. He went to Johnson and Wales to study culinary arts. “I was working in my Dad’s restaurant on Huguenot Street in New Rochelle. We prepared prosciutto, pastrami, brisket. All my relatives are still in New Rochelle,” George said.

He is a good-natured chef with a pronounced New York accent. “I moved to Washington DC and worked in an Asian restaurant, Pen Pen, under Chef Jeff Tunks. He has seven restaurants there now. From there I went to Charleston, South Carolina and worked under Louis Osteen for five years. I loved it there.”

When 9-11 hit George moved back to Washington and returned to Jeff’s kitchens. The desire to have his own place stirred in him. George moved to Ft. Lauderdale, Florida where he opened Sweet Stop. To hear him tell it, “I met Tom Smith at a local bar. Started doing cooking classes for two years then opened a grill as well as a restaurant called Meat. We opened S.A.L.T. in mid-April 2014.”

When asked what he liked to eat, George didn’t hesitate, “I love meat. We serve marrow bones. My grandfather loved them. My favorites are rib eye, pork belly and scallops. I like Asian flavors. I’m Italian so I enjoy flavorful tastes. We get our beef from Nebraska, our scallops from New Hampshire and Maine, grouper is local as is our shrimp, yellow tail and tuna. We do fun stuff others are not doing.” Chef George was adding savory spices to a pan of mussels in his brand new kitchen.

S.A.L.T is housed in a two-story building on the ocean side of U.S. 1. Like many buildings in the Florida Keys, the first floor is elevated in case of flooding from hurricanes. Cana Lounge is on the second floor above the restaurant. Cana is where mixologist Sean Crehan creates his signature exotic cocktails. The lounge is modern with black leather sofas and plush black leather armchairs. Orchids decorate tables around the room. The bar forms a semi-circle with stools. Patrons can choose long tables with high stools or individual high tables with stools. The room is decorated with enlarged night photographs of New York City bridges.

“We make our own ginger beer. We mix it with Zaya rum from Trinidad. It’s called Cana Dark n’ Stormy. We mix all our own fresh fruit every day,” Sean said. “The lounge décor was created with a copper-colored floor and amber lighting.” He spoke while pouring. “This represents storm clouds.” The rum swirled dark on top of the lemon colored ginger beer. “When you mix it all in, it’s a beautiful cocktail. We juice our own ginger, lemon, lime and carbonate it. I have to come in every day to make ginger beer,” Sean laughed. “I created a monster.”

As with everything at S.A.L.T. their wine list is novel. It is a six-page list on blue paper; simple and to the point. Wines by the glass include Hess Chardonnay from Monterey $7 the glass, Whoop Whoop Shiraz from Australia, $6.50 the glass, Clos la Coutale from Cahors, France $10 the glass.

Bottled wines include a goodly number of Bordeaux varieties like South African Cabernet Sauvignon Graham Beck, $35.99 and Mondavi Rothchild Opus One from Napa 2005, $275.99. Merlots include Paso Robles by Robert Hall from California 2011, $32.99. A bottle of Malbec from Argentina, like Ruca Malen, costs $39.99. White wines are well represented on Tom’s list. They include Wind Gap Chardonnay from Sonoma, $95.99, Fair Valley Sauvignon Blanc from South Africa, $39.99, Trimbach Gewurztraminer from Alsace, $40.99. The wines are all fairly priced and selected to meet most tastes.

S.A.L.T.’s menu offers 13 starters listed as small plates. There is Ceviche with coconut, Serrano peppers, sweet potato, Yuzu and cilantro as well as Mussels. Chef George cooks them to perfection with miso, mirin, lemongrass, rosemary with a touch of Cotija cheese.

Like most great chefs, George seasons by instinct not measure. “What are you putting in there, George?” S.A.L.T.’s cook Charlie asked. George reached into an array of spices next to the stove and added a pinch of this and a pinch of that stirring them into the pan as the mussels simmered.

The marrow bones came out of the kitchen hot and savory. The wonderful taste is known to gourmets around the world. While not popularized in the U.S., large beef bones are sawed length-wise and slow roasted with parsley and lemon. S.A.L.T. serves the dish with fig jam and the best tasting crostinis in the universe. Meat lovers will savor the marrow. Picking the long bones up with fingers and sucking out the marrow, once all is scooped, is the only way to enjoy their full taste.

There are many unique starters on the menu, including one of Chef George’s favorites, Kurobota pork belly. Small plates run from $8 to $12.

Salads at S.A.L.T. run about $10. Romaine comes with prosciutto that is wrapped and grilled, Parmesan and lemon dressing. The spinach salad is served with Bourbon vinaigrette, candied pecans, match stick apples, Cotija cheese, watermelon radish and lamb bacon. Taste is everything and the blending of different flavors makes even a simple salad savory and healthy.

Chef George’s big plates include steaks cooked ‘sous vide.’ The French word for under pressure. Their bone-in rib eye is a large 16-ounce portion that comes to table with jalapeno balsamic relish, a hot small iron skillet of sweet corn pudding and soy glazed bok choy, $42. The rib eye is tender, juicy and savory. This is no portion-controlled ‘wholesale to the restaurant trade’ meat. The steaks come from western purveyors and are selected for taste and quality.

There is fresh caught fish like grouper as well as shrimp carbonara, yellow fin tuna, whole yellow tail and specials from local fish mongers. Servers offer suggestions and daily specials. If good food with savory taste, some experimental flavor and fusion cuisine is to your liking, S.A.L.T. serves perfection. It is worth a trip to Islamorada just to eat, never mind colossal orange and red sunsets over the bay.

Chef George is one of the world’s great chefs. His experience in the kitchen, his willingness to create dishes other restaurants find too difficult to prepare as well as S.A.L.T.’s steadfast perfection in culinary arts will make this new restaurant one of the finest anywhere. Tom Smith’s wine selections, S.A.L.T. mixologists’ dedication and Chef George with his kitchen team will make dining a memorable experience.

For more information and reservations call 305-664-9094. The restaurant is located at 82779 Overseas Highway (US 1) in Islamorada, FL 33036. For general information about Islamorada contact the chamber of commerce toll-free at 1-800-FAB-KEYS or 305-664-4503 or visit their website at www.islamoradachamber.com.