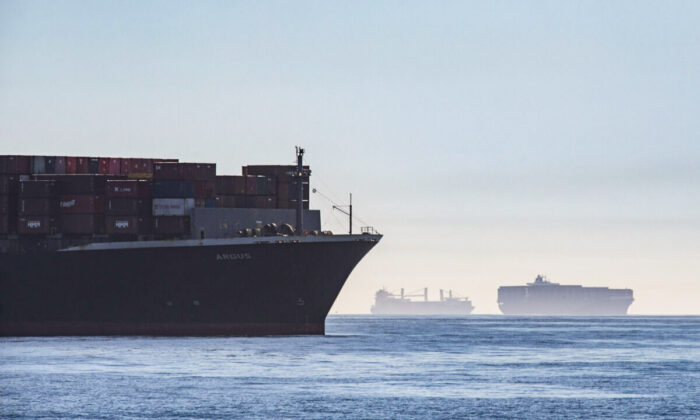 On Oct. 15 in The Epoch Times, I was one of the first to blame California’s high taxes and regulations for the shortages and clogged ports from which we’re all suffering, leading to higher prices.

“In a Tuesday letter to [California Gov. Gavin] Newsom, the business groups asked him to declare a state of emergency at the ports. They also demanded he suspend numerous controversial state laws, including one that requires developers to mitigate their projects’ environmental impact and another that forced many companies to reclassify independent workers as employees,” Emily Hoeven, of CalMatters, wrote on Oct. 21.

Hoeven quoted the 19 business groups, who wrote: “The supply chain crisis at the ports is the inevitable culmination of … a series of state, regional, and local mandates forced upon every aspect of the goods movement economy.”

There’s actually a theory for this, called the Wedge Model. It was developed by economist Arthur Laffer, who helped design tax cuts for Presidents Ronald Reagan and Donald Trump, California’s Proposition 13 tax cut from 1978, and many other tax cuts.

Another economist, the late Jude Wanniski, described it clearly back in 2002, so adjust for inflated prices and costs today. I’ll provide some contemporary comments.

“The ‘Wedge’ in the Wedge model should be pictured as a government Wedge that is used to come between two potential transactors. As Laffer developed it, he discussed the Wedge between an employer and an employee, between management and labor,” Wanniski said.

“The worker gets paid $12.50 per hour or $500 per week, but because the federal, state, and local governments take a variety of income and payroll taxes out of the wage, the worker sees a net of only $380, or $9.50 an hour. The $120 per week difference is the Wedge. The worker is doing $500 worth of work, but getting only $380 for his labors and has a tendency to offer less labor as the Wedge increases.”

That explains why so many workers aren’t going back to their old jobs following the pandemic lockdowns, even though unemployment insurance has run out. Before the COVID-19 lockdowns laid off millions of people beginning in March 2020, people got used to paying the high Wedge price in taxes and regulations.

But after they were out of work for so long, more than a year in many cases, they looked at the Wedge and saw there was no point in going back to work. Maybe a spouse now made enough money so the family could survive on one income. Or other income, such as a pension, was enough to cover expenses. If the Wedge were reduced—through tax cuts or a large pay increase—the person might still go back to work. But not until then.

“With a progressive income tax, the worker may be offered time-and-a-half for an extra hour’s work, but because the extra hour is taxed at a higher progressive rate, the worker will get something less than time-and-a-half,” Wanniski said. “The Wedge became particularly onerous in the rapid inflationary years of the 1970s, as inflation drove workers into higher tax brackets with no increase in purchasing power.”

We now have inflation again, with prices going up rapidly. A raise only pushes workers into a higher tax bracket. In 2021 California, the 9.3 percent state income tax bracket digs in at about $60,000 of income. Contrast that with the new 2.5 percent flat tax in Arizona, or states such as Texas, Florida, Nevada, and Washington that don’t have a state income tax. Yet, it still takes at least $165,000 per year just to afford a simple home mortgage in California, because median housing prices are now at $900,000. The high housing prices are also a Wedge—the biggest one.

For many couples, a second income now will just push the family gross income into a much higher tax bracket, making the work less desirable.

Wanniski calculated that an average worker, such as a carpenter, in 1965 paid just 5.2 percent of income in federal taxes (not including state taxes). But by 2002, because inflation pushed the worker into a higher tax bracket, that had risen to 25 percent of income for the same work at an inflated, but equivalent wage. That 25 percent Wedge tax is about the same today. Income has been indexed to inflation since 1985, but was never backdated to take account of the vast 1970s inflation.

In 2002, Wanniski said something that’s just as true today: “The observable fact is that it is much harder for a breadwinner to support a family of four today than it was [in 1965]. Laffer’s Wedge partly explains why.”

On the ports, an Oct. 26 Yahoo Finance article quoted truckers, port executives, and union officials blaming one another for the backlog. Whoever is to blame, “essential workers are still scarce but U.S. consumers are still in a buying mood, meaning the congestion is not expected to wind down until the second half of 2022,” according to the article.

Wanniski expanded on the Wedge Model in his 1978 book, “The Way the World Works,” which advanced the supply-side economics theories that underpinned Reaganomics, which ought to be revived today.

The Wedge isn’t just taxes, he wrote, “but also all the other government burdens on the transaction that require labor. Because the government does not realize revenues from a regulatory order—red tape and paperwork—it does not think of such orders as ‘taxes.’” But to a worker or company, “there is no difference between financial taxes and regulatory burdens; each requires precise amounts of labor.”

A company filling out numerous new forms from a recently passed law has a “precise” cost for that labor and lost time. Wanniski’s solution: “Taxes of all sorts must be reduced”—taxes meaning not just what one pays to the government, but taxes such as filling out forms and otherwise complying with regulations.

Here’s a good example: I’ve known several doctors over the years who, when Medicare, Medi-Cal, and other regulations increased, either quit practicing medicine or just stopped handling patients with government-supplied insurance.

We’re seeing a similar Wedge at work as vaccine requirements are driving some police and medical workers to leave their jobs. As a response, Florida Gov. Ron DeSantis has offered $5,000 bonuses to such police officers to come work in Florida if they leave New York; Minneapolis; Chicago; Seattle, Washington; and other police departments due to vaccination mandates.

After two In-N-Out Burger joints were closed in the Bay Area for refusing to comply with COVID-19 vaccine mandates for indoor customers, Florida invited them to leave the Golden State for the Sunshine State.

“I know this it would never happen in the state of Florida, but mark my words, just like Tesla left the state of California because of overregulation, you’ll see In-N-Out Burger move out of the state,” Florida Chief Financial Officer Jimmy Patronis said.

Finally, a big part of the Wedge is long-term effects. Everybody knows California is regulation-giddy. I wrote a four-part series in The Epoch Times on just some of the hundreds of new bills that Newsom signed into law in 2021. Even if California institutes temporary measures to ease port problems, the same problems will persist in the future. That gives truckers, crane operators, and others who might otherwise come here for a short-term job a reason to avoid the state and seek employment elsewhere.

Until California wises up and reduces its Wedge by cutting taxes and regulations, future crises will just repeat the current logjams and shortages.