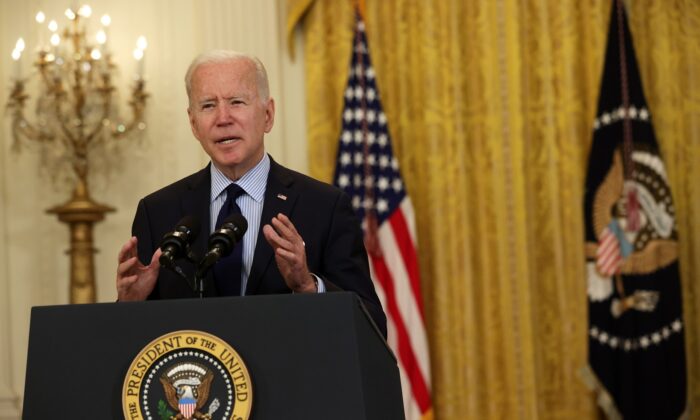 President Joe Biden speaks on job numbers from April 2021 at the East Room of the White House on May 7, 2021. (Alex Wong/Getty Images)
Viewpoints

The Way We Live Now

I take my title from Anthony Trollope’s great 1875 novel chronicling the activities of the rapacious swindler Augustus Melmotte and his coterie of grasping climbers and brittle ingenues.

Trollope saw deep into the cynical engine room of his society, where a deadly brutishness panted just beneath the painted surface of propriety.

In our story, the star is no less grasping than Melmotte, but he’s been crossed with Chauncey Gardiner from the movie “Being There,” the confused puppet who, serving the interests of the dominant party’s power brokers, finds himself president of the United States.

This is a story with patches of light as well as expanses of shadow, so in addition to the exploits of a gibbering Joe Biden, we are introduced to a number of subplots, some cheering, at least in part.

So when we read that Lt. Col. Matthew Lohmeier was relieved of his duties in the Space Force because he criticized the influence of Marxism and critical race theory in the U.S. military on a podcast, it’s consoling to see that his book on the subject—“Irresistible Revolution: Marxism’s Goal of Conquest & the Unmaking of the American Military”—should climb to the No. 1 spot on Amazon.

Even some of the dark spots have their amusing sides.

We glance, appalled, at what is happening in the Middle East as Hamas terrorists, supported by the mullahs of Iran, bombard Israel.

But right on cue, the geniuses at The Babylon Bee explain it all as the higher strategy of undoing the legacy of Voldemort, i.e., the Bad Orange Man, aka Donald J. Trump.

Among his many nefarious actions—making the United States energy independent, instituting economic policies that brought minority unemployment to its lowest level in U.S. history, slowing illegal immigration along our southern border to a trickle—Trump brought peace to the Middle East with the Abraham Accords.

As the Bee explains, all that had to be undone as “Biden Continues Rollback of Trump Policies Like Peace in The Middle East.”

Item: “A spokeswoman for President Biden said Wednesday that he remains committed to rolling back all of former President Donald Trump’s policies, including peace in the Middle East. Palestinians in the West Bank voiced their collective approval by launching celebratory rockets into Israel.”

Yes, the Bee is once again on the case.

A few days ago, the Israelis destroyed the building that headquartered the offices of The Associated Press in the Gaza Strip.

Great cries of protest and moral obloquy followed from the AP. The Israelis explained that the building also houses offices of Hamas.

“We didn’t know that,” said spokesmen for the AP.

That objection was occasion for lots of snickers, not least among headliners writers at the Bee, who came with “Eight Warning Signs You Might Be Sharing Office Space With Terrorists.”

“You notice suicide vests hanging on the coat rack,” “They only play CNN in the lobby,” “You get notified by the IDF that you are sharing office space with terrorists, and your building is leveled shortly after,” and so on.

And the jokes just keep on coming.

Remember the Russian Collusion Delusion, the round-the-clock barrage of accusations that Russia, Russia, Russia interfered in the 2016 election to accomplish the impossible and elect Donald Trump?

The New York Times and The Bezos Washington Post were on the job, breaking scantily sourced tales of infamy and treason that the rest of the press lapped up and the Dems in Congress fulminated over and used as an excuse to launch the $40 million show trial known as the Mueller investigation.

The infamous Steele dossier was at the “fons et origo” of that farce, a scabrous fantasy of micturating Russian prostitutes and political blackmail.

Soon enough, we learned that it was all paid, covertly, by the Hillary Clinton campaign, but that didn’t impede the full-court press against Trump.

Now that he has been neutered, it’s time to rearrange the furniture, so The New York Times publishes a story on May 15 about “The Hidden Ties Between Private Spies and Journalists,” with the disgraced Christopher Steele at the center of the whitewash, I mean “inquiry.”

Meanwhile, economic warning signs are flashing red as unemployment and inflation numbers are way up and Joe Biden blinks into the middle distance and gibbers that April’s disastrous jobs report shows that America is on “the right track.”

But amid the comedy, there are dark and minatory signals about the way we live now.

The gimlet-eyed Janet Daley identified one worrisome cluster in a column for the London Telegraph called “Free society is finished if we fail to resist this new Dark Age of unreason.”

Daley begins by noting the irony that the collapse of Soviet Communism, one of the most evil tyrannies the world has ever seen, did not, as some observers predicted, usher in a new age of sweetness and light but rather removed one of the supporting props of global security.

The resulting vacuum has fostered confusion and disarray everywhere, but mostly, Daley argues, in the West, which has been seduced into abjuring its faith in reason and open debate.

“Public discourse,” she writes, “does not consist of competing arguments anymore: it isn’t a proper discussion at all. It is a diatribe in which one side tries to destroy, or prohibit, or totally suppress the other.”

She warns that we are on the verge—or perhaps past the verge—of “a Dark Age where reason and actual disputation are considered dangerous: where views contrary to those being imposed by what are often nothing more than activist cults can be criminalized. Not only must those who now hold opinions which breach orthodoxy be banned but historic figures who could not possibly have anticipated current social attitudes must be anathematized as well.”

Daley sees a parallel between our situation the age of religious absolutism in the West, when the Church busied itself enrolling books by David Hume and John Locke on its Index Librorum Prohibitorum.

Be that as it may, Daley is surely right that the question isn’t whether you approve of any particular opinion but whether you insist that orthodoxy be accepted, indeed celebrated, without question or examination.

“Much has been said about the ‘illiberalism’ of what now presents itself as liberal opinion,” Daley notes, “but what is happening goes way beyond simple intolerance. It is a return of something no thinking person expected to see again in the rational West: the banishment, or the hunting down, or the deliberate ruination, not just of explicit opposition but of coincidental association with a tainted position.”

Once upon a time, we trusted in various liberal institutions—the press, the schools, the universities—to protect the canons of rational debate and respect for evidence and principled disagreement.

But to an extent marvelous to behold, those bulwarks of civilization haven’t simply failed to uphold the values for which society created and sustained them. They have worked overtime to destroy those values.

Again, Daley is right, “This new Dark Age, with its odd combination of narcissism and self-loathing, is a threat nobody saw coming.”

She ends on a note that is both admonitory and hopeful.

“If the institutions that should resist—universities, the arts, and democratic governments—fall before it, the free society is finished.”

The admonitory bit is patent. Unless successfully resisted, the widespread attack on reasoned debate will end free society.

The hopeful bit is the conditional: If those institutions in which we have placed our trust fail, then free society is finished.

There are those, I suspect, who would argue that those institutions—“universities, the arts, democratic governments”—have already, and eagerly, succumbed, so that the “if” is out of place.

I think of a stinging observation by the great German satirist Georg Christoph Lichtenberg, “Nowadays we everywhere seek to propagate wisdom: who knows whether in a couple of centuries there may not exist universities for restoring the old ignorance.”