The War on Jefferson—Is Franklin Next? 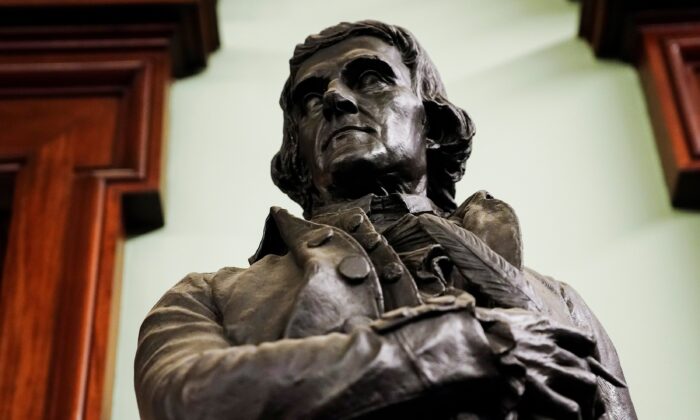 The final decision, after years of debate, was made on Oct. 8 to remove from the New York City Council chambers the statue of the man we all know to have been a dreaded slaveholder—to the tune of 600 over his lifetime—Thomas Jefferson.

Despite that, writing at Bari Weiss’s Substack, political science professor Samuel Goldman, with whom I concur, is less than happy.

“The removal is disgraceful. Unlike monuments to Confederate leaders that display them in full military glory, Jefferson is depicted as a writer. Holding a quill pen in one hand and the Declaration of Independence in the other, he is clearly being honored for composing an immortal argument for liberty and equality.”

Ah, life, isn’t it complicated? Just ask Sally Hemings. But you can’t, obviously. Who knows—perhaps Jefferson went to his grave wishing he could have married Sally, his slave with whom he apparently had children. Sally may well have felt the same way. Nothing is simple.

Like it or not, we are all creatures of our times. Thomas Jefferson was clearly a hypocrite, often tortured by his own hypocrisy, but he was also a genius whose writings offered great hope for humanity, all of humanity, despite the N.Y. City Council’s Black, Latino, and Asian caucuses calling, as Goldman reminds us, the Declaration he authored “the disgusting and racist basis on which America was founded.”

Having been a professional writer all my life and having had the good fortune to know many fine authors, playwrights, and essayists, some “of color” even, I know not one who has written anything nearly as powerful and evocative as “We hold these truths to be self-evident, that all men are created equal, that they are endowed by their Creator with certain unalienable Rights, that among these are Life, Liberty and the pursuit of Happiness.”

Those words bring tears to my eyes, now more than ever, given the current state of our presidential rhetoric, which runs to “Build back … y’know … the thing.”

What Jefferson’s critics are unable to do, likely don’t want to do, is practice what is known in psychoanalysis as “containment” and is defined in Webster’s as “the act, process, or means of keeping something within limits.”

Someone with a relatively healthy mind is able to put historical revelations in context. Nothing appalls the “woke” more than that. They are always accusing the rest of us of “contextualizing.” But that is what adults do. We look at the past, evaluate it, try to take the best from it and avoid the worst, and move on.

And thus, they are condemned to repeat it. As they are now—in the United States of America—to everybody else’s dismay and horror.

Who will be the next to go? Benjamin Franklin—America’s own DaVinci. No doubt he’s in their crosshairs. (What about that poor little mouse from “Ben and Me” so many of us grew up with?)

Fortunately, in the case of the Jefferson statue, it won’t be destroyed, but removed to another location. (Wise move because these things often are walked back when people come to their senses.) And it’s not the original anyway, but a copy. The original is in the U.S. Capitol Rotunda, waiting for The Squad to complain about its presence and/or existence, if they haven’t already.

I learned something I hadn’t known about that original from Goldman’s article. It was “commissioned by the French sculptor David d’Angers in 1833 by Uriah P. Levy, a Jewish naval officer who suffered from antisemitism in his military career.” That included six courts-martial, some apparently stemming from duels fought over religious slurs.

Levy was devoted to Jefferson’s memory, particularly because of the third president’s strong belief in religious freedom. But Levy—who had commanded a vessel to suppress the slave trade—had some blemishes of his own. After Jefferson’s death, he purchased more than a dozen slaves to work on the restoration of Monticello.

Which, ironically, leads us to the present, when the crusade against Jefferson at the city council has been led by the pro-despot (Mugabe and Qaddafi), pro-Hamas, ally of the New Black Panther Party Assemblyman Charles Barron, who has claimed “real” Semites are black and accused Israel of—you guessed it—“genocide.”

How to explain, then, that the Arab population of Israel has grown considerably faster than the Jewish? Problem, no? You’d think after Auschwitz, the Jews would know how to do genocide. Slow learners, I guess.

But no matter. Such things don’t concern folks like Barron. (He also called Jefferson a “pedophile” who “raped children.”)

Give me Thomas Jefferson, warts and all, over the Charles Barrons of the world any time.

As for where the Jews fit into all this, I will have more to say when reporting from the Republican Jewish Coalition’s annual conference in Las Vegas on Nov. 5. It’s safe to say their kinsman Merrick Garland won’t be popular with this group. He sure isn’t with me.

So, to paraphrase Sun Tzu, keep your Jefferson statues close and your Franklin statues closer. (And maybe keep a few Madisons in the closet.)