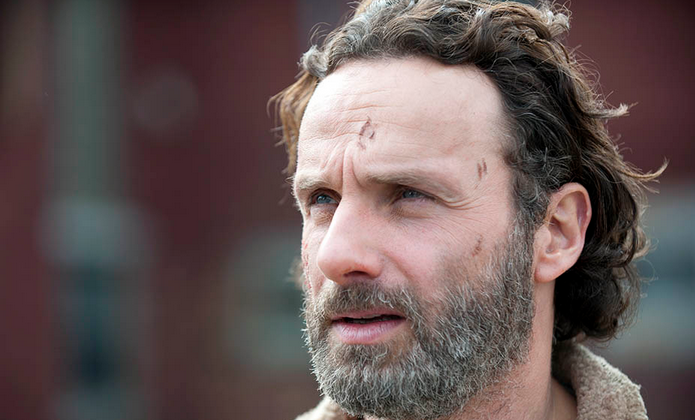 Rick Grimes (Andrew Lincoln) in Episode 16, or the season finale, of season 4 of The Walking Dead. (Gene Page/AMC)
Entertainment

There’s a lot of hints out there right now as to what happens in the episode, including three different clips or series of clips. Using the evidence, here’s a complete episode prediction.

The episode opens with a scene from one of the sneak peek clips, with Rick, Carl, and Michonne in the woods. Rick’s showing them both how he caught a rabbit.

Suddenly, they hear a man yelling for help nearby. Carl takes off running, with Rick and Michonne coming after him.

This is when Rick, Carl, and Michonne meet the new character Gareth, who is reportedly a remix of an unnamed character from the comics.

Gareth and some of his companions are battling a horde of walkers and Rick and the others help them take out the walkers, but not before one of Gareth’s group was killed. The death is seen in one of the series of clips posted online, which has since been removed.

After the area is cleared, Rick converses with Gareth, who tells Rick that he’s from Terminus and that they were out scouting for people when they ran into trouble.

Rick decides to trust Gareth and the trio go with Gareth and his two companions to Terminus.

The six of them arrive at Terminus and Rick walk through the entrance and up to Mary, much like Glenn’s group did at the end of the last episode.

However, Rick begins to get unsettled about the atmosphere and notices that something is wrong, some kind of evidence that Glenn or someone else he knows has already arrived at Terminus. He brandishes a gun and demands to know “Where are our people?”

Gareth tries to get Rick to calm down but Rick grabs one of the people at Terminus and holds a gun to their head in a face-off with Gareth. Carl has his gun up and Michonne whips out her sword.

Suddenly, people appear on the rooftops of shoot at Rick, Carl, and Michonne.

They take cover and eventually escape from Terminus.

The trio are on the run, pursued by people at Terminus. They stumble upon a church and duck inside, finding a room full of candles and small religious statues.

They are eventually greeted by Gabriel Stokes, a preacher who lives at the church. As in the comics Gabriel spent the first few weeks after the disease hit barricaded in the church and denying requests by parishioners and other people in the town for help. He’s now guilt ridden and trying to help people out.

Stokes still has his secrets, though. He is the one who took Beth but doesn’t tell Rick, Carl, and Michonne about her. There is a quick reveal that Beth is still alive, though.

Gabriel and Rick quickly discuss how the people at Terminus are crazy Rick tries to figure out any weaknesses at the compound. Gabriel doesn’t know, apologizing, and also says that he can’t leave the church to help them but urges them to go out the back while he will distract the pursuers from Terminus if they come to the front.

Rick, Carl, and Michonne take off from the church and soon find themselves in a garage of some sort where they seek shelter for the night.

Unbeknownst to them, the people from Terminus aren’t the only group looking for them. Joe and his group, which now includes Daryl, are seeking revenge after Rick killed one of them back at the house they were holed up in after the prison situation.

Joe and his group have been tracking them the whole time and finally catch up to them in the garage.

Daryl intervenes when he sees who their targets are, upsetting Joe, who berates both Daryl and Rick. Two guys start fighting Daryl while Carl locks himself in a car, Michonne starts fighting some of the other guys, and Rick takes off running.

This is where Rick is stuck in one of the trailers with his back to the wall and shaking. He’s for whatever reason without a gun while the man or men pursuing him have weapons.

Daryl ends up dying in the fight while Michonne assists Carl and the pair take off into the woods. Rick is saved by Carol and Tyreese, who he then follows out of the garage.

This is where Michonne and Carl hug in the woods, unsure if Rick is alive. Rick thinks that Michonne and Carl are dead as he seems something that he misconstrues and decides to go to Terminus to free Glenn and his group. Just then he, Carl, Tyreese, and baby Judith run into them, as they got free themselves. However, at least one of the group died during the attempt. It’s practically impossible at this point to make any guess as to who that would be. Daryl getting killed is just a guess as anyone could die except for Rick.

Rick talks to Abraham and learns about the mission to Washington, D.C. and decides that the mission is worthwhile. Right at the end of the episode, Carl and Michonne find the group. The new group starts heading to D.C.

NOTE: The only evidence so far about season 5 is a casting call that says:

“Season 5 begins with Rick and the group heading to Washington DC, where they meet new danger and a new enemy. Once again, Rick must do whatever it takes to keep the rest of the group safe.”