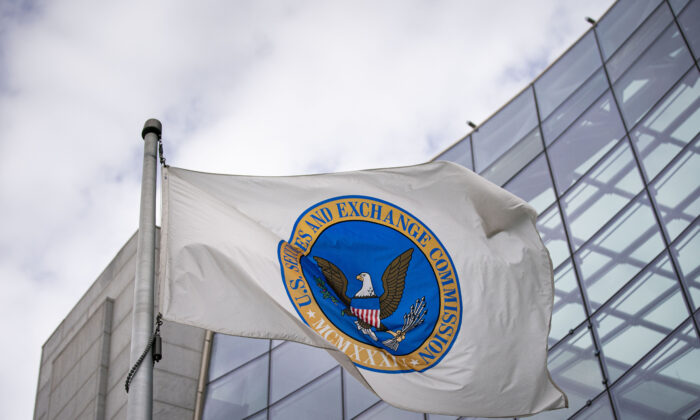 A flag outside the U.S. Securities and Exchange Commission headquarters in Washington on Feb. 23, 2022. The SEC proposes a sweeping climate change disclosure rule that public companies must follow. (Al Drago/Bloomberg via Getty Images)
Thinking About China

The US Securities and Exchange Commission Is Copying Chinese Communist Methods

The Biden administration’s top domestic priority is to “tackle the climate crisis” by implementing the authoritarian socialist policies of the so-called “Green New Deal.”

The purpose of the GND is to use the force of the federal government to remake the U.S. economy completely through arbitrary bureaucratic measures instead of being implemented in U.S. law through congressional action.

These actions are patterned after the authoritarian methods used by the Chinese Communist Party (CCP) to control businesses and individuals in China.

Those methods involve forcing businesses and individuals to regularly report their actions in order to conform to arbitrary CCP requirements while enabling communist bureaucracies to monitor those actions to determine and enforce compliance directly.

A social scoring system is used to control behavior and implement penalties for noncompliance, with the social scoring aligned with the political objectives of the ruling party.

The authoritarian methods being rolled out by the CCP in China are precisely what GND proponents in the Democratic Party seek to implement in the United States. The Democrats call the shots and implement compliance measures via the federal bureaucracy.

Here is their game plan.

Immediately after Inauguration Day in 2021, President Joe Biden signed executive actions that established the “green objectives” of his administration, as excerpted from the official White House website:

“To hold polluters accountable, including those who disproportionately harm communities of color and low-income communities; to reduce greenhouse gas emissions; to bolster resilience to the impacts of climate change; … and to prioritize both environmental justice and the creation of the well-paying union jobs necessary to deliver on these goals.”

These activities are intended to reduce domestic oil and gas production and force Americans to use so-called “green energy” alternatives to power their businesses, vehicles, and homes.

Since so-called renewable energy sources currently account for only 12 percent of U.S. energy production, according to the U.S. Energy Information Administration, the U.S. economy from top to bottom would have to be disrupted and changed (and destroyed?) to achieve the objectives of the left’s GND.

Biden’s executive orders have shut down the Keystone XL pipeline, placed a moratorium on the leasing of the Arctic National Wildlife Refuge (ANWR) land for oil and gas drilling, halted new oil and gas leases on federal lands and waters, and led to a frantic push to increase oil and gas imports from adversarial countries such as Russia, Venezuela, and Iran (after the new deal is consummated in Vienna).

Early results of these bureaucratic actions include historically high gasoline prices (the average price on March 28 was $5.928 per gallon in Los Angeles) and inflation throughout the U.S. economy (7.9 percent for the 12 months ending February 2022) that’s directly tied to the high energy costs.

Secondary effects include de facto U.S. financing of Russia’s war in Ukraine through a spike in imports of Russian oil in 2021, as documented and graphed by the U.S. Energy Information Administration.

The above bureaucratic actions are relatively standard and obvious when contemplating what the federal government might do to pursue the administration’s GND objectives.

A much more insidious and far-reaching step toward implementing socioeconomic controls through the financial regulation of U.S. businesses has recently been taken by the Securities and Exchange Commission (SEC), as reported by The New York Times:

“The Securities and Exchange Commission has said for the first time that public companies must tell their shareholders and the federal government how they affect the climate, a sweeping proposal long demanded by environmental advocates.”

The bottom line is that the SEC is being weaponized to implement through administrative action GND-related social controls sought by climate change activists that will force businesses to report the “climate impacts” of their business operations.

This is just the typical nose of the camel under the tent because fines and penalties for noncompliance with to-be-determined bureaucratic requirements are the almost certain next steps in forcing U.S. companies to “go green.”

If/when implemented by the SEC after receiving feedback from the public, these new rules will have far-reaching effects on publicly traded companies that will be forced to comply with the evolving “environmental and social governance” (ESG) standards being developed cooperatively by climate activists, financial institutions, and government officials in the United States and around the world.

According to the Heartland Institute, approximately “82 percent of large companies in the United States” have ESG systems already in place.

The Heartland Institute points out that ESG standards include models and statistics for monitoring and enforcing many left-wing causes. Examples include the following:

In short, ESG standards and associated statistical measurements can be arbitrarily defined outside normal legislative processes for almost any left-wing cause, with the federal government becoming the ultimate arbiter of authorized business activities. This is the Chinese communist model!

As an aside, despite claims that “the science has been settled” about anthropogenic carbon dioxide being a major contributor to “climate change,” new studies continue to be produced that debunk this unproven theory.

For example, a recent report, titled “World Atmospheric CO2, Its 14C Specific Activity, Non-fossil Component, Anthropogenic Fossil Component, and Emissions (1750–2018),” concludes the following: “Our results show that the percentage of the total CO2 due to the use of fossil fuels from 1750 to 2018 increased from 0% in 1750 to 12% in 2018, much too low to be the cause of global warming.”

Despite this real science, the Biden administration seeks to take the U.S. economy over the cliff to pursue its GND dreams.

President Joe Biden’s SEC is marching to the drums of environmental extremists in pushing new financial regulations to define and enforce what they deem to be “environmentally responsible actions” by businesses and individuals.

By setting arbitrary ESG scores that are based on politics instead of science, the SEC would be able to affect a company’s reputation adversely, determine a company’s ability to borrow money from major financial institutions, assign financial penalties for noncompliance, and even potentially force “goodwill gestures” through the investment of company profits in socially responsible left-wing activities and organizations in order to offset bad ESG scores.

This would be capitalism with Chinese communist characteristics!

Such actions would be a direct interference by the government in the capital appreciation of companies and in dividends to their shareholders—all in the name of left-wing GND (and other) political objectives.

Add these CCP-inspired measures to the massive tax and spending increases proposed in Biden’s budget demands. The result is a predictable recipe for economic disaster: a return to the stagflation of the 1970s. It is axiomatic that governments can neither tax nor spend their way to prosperity.

All of this is a twofer for the CCP in its quest for world domination and control: the conditioning of American businesses and individuals to accept CCP-style social controls while at the same time also destroying the U.S. economy.