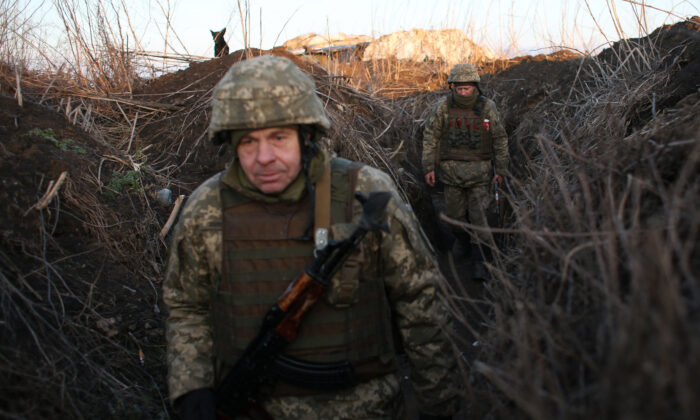 Ukrainian Military Forces walk along trenches on their position on the front line with Russia-backed separatists, near Novognativka village, in the Donetsk region of Ukraine, on Feb. 21, 2022. (AnatoliI Stepanov/AFP via Getty Images)
Viewpoints

The Ukraine Crisis Is on Biden

Does anyone seriously believe that if Donald Trump were still sitting in the Oval Office, as perhaps he should be, Ukraine would be in the jeopardy that it is?

The Ukraine crisis is on Joseph Biden. And I’m not just talking about how he treated that country as his family’s piggy bank, with his son making a fortune off their energy giant Burisma while Joe himself threatened to withhold aid to Ukraine unless they fired the prosecutor investigating the famously corrupt company.

On Jan. 20, 2020, Biden canceled presidential approval of the Keystone XL pipeline. That was followed by a slew of other actions on energy, eliminating the United States’ newly won energy independence and ability to export its surplus.

With all this, Vladimir might have fainted, if he ever does such a thing, at his good fortune.

It meant Germany, Europe’s powerhouse, as well as many other countries, would be more dependent on Mother Russia for warmth the coming winter (and many more) via the Nord Stream 2 pipeline.

Biden is now suddenly threatening to cut off that pipeline should Russia invade Ukraine. It’s unclear how he would do it. How long such a threat would last in the cold of a European winter isn’t hard to guess.

Whether his energy policies are the most destructive of his administration is moot. There are so many.

But it does rival the chaotic departure from Afghanistan that left behind billions in modern armaments for the Taliban, an intact Bagram Air Base with one of the longest military runways in the world as easy pickings for the Chinese (their nuclear development facility a mere hour away), plus untold thousands of our citizens and allies stranded in that most primitive of locations, and the women in the hands of some of the most misogynistic people on Earth.

As for Keystone XL, Biden backed up his ruling by similarly withdrawing presidential support this January for the Greek–Israeli pipeline. It would have helped fuel Europe while simultaneously aiding the economy of two supposed U.S. allies. (Let’s not even go into what kind of ally Biden really is to Israel, given his evident desperation to rejoin a renewed Iran nuclear deal. The only thing that may be saving him is the Iranians themselves seem to be uninterested in any kind of deal, just in stalling.)

Biden claimed to be ending support for both pipelines for environmental reasons. Does he really believe that?

Alternative energy is far from ready technologically to provide anywhere near the necessary needs of Europe, Asia or Africa, or any populated continent. It already has failed in Texas. Solar and wind may not even be the alternative means ultimately used, as respected energy journalist Bjorn Lomborg has been pointing out for some time.

Also, climate catastrophe has been overhyped for decades, well before it was predicted in the British Independent (2000) that “Snowfalls are now just a thing of the past.” In the late 1980s, a “climate expert” told us Manhattan would be underwater by 2018. Given the lack of safety in the streets there today, maybe it’s unfortunate he wasn’t correct. (John Nolte has an amusing list of 53 such absurd predictions, dating back to 1967 when a dire famine was foretold for 1975. The 1970s were full of New Ice Age warnings that famously made the covers of Time and Newsweek.)

So something else other than climate nonsense must explain Biden’s desire to eliminate pipelines. We already know that Russia will profit most from the abandonment of Keystone XL and the Greek–Israeli EastMed collaboration.

Meanwhile, the People’s Republic of China is the world’s biggest provider of solar collectors, many of which fail after a relatively short time. Is it that simple?

According to Peter Schweizer’s new book “Red-Handed,” the Biden family has profited from China to the tune of $31 million. The usual suspects have ignored this, but is anyone really contradicting it? Schweizer calls what is happening “Elite Capture.”

At the same time, the Western powers are conferencing in Munich, an odd choice of venue, but they are calling this go-round the Munich Security Conference.

Will that make a difference? Color me skeptical, on this occasion I don’t think there will be the storied “peace in our time.” As most of us know, there wasn’t the first time, either.